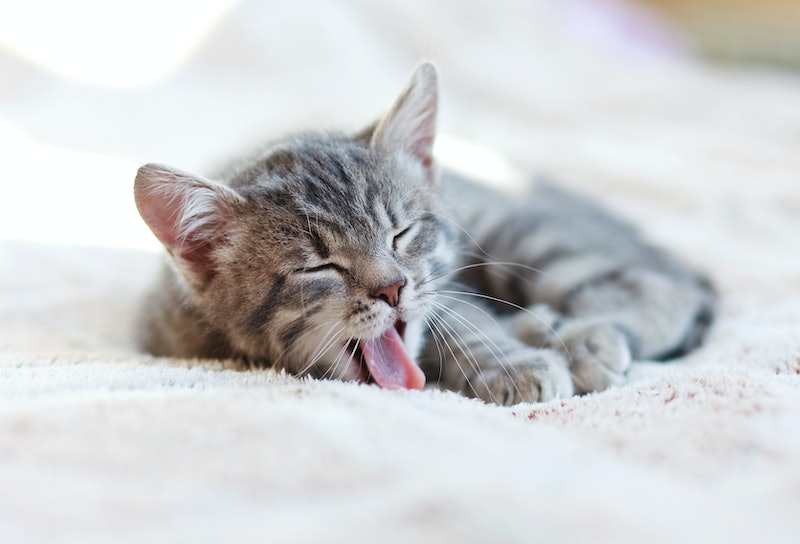 If your eyes have been in a perpetually hazy state lately and you woke up this morning wondering if you could get away with wearing sweatpants to the office, then you probably need more sleep. Your hair is most likely still wet in the messy bun you threw it up in, and your eyes are looking rather... dead. Don't worry, we all could use more sleep. There are probably as many well rested individuals in America as there are in the one percent, and I'm sure some of those REM cyclers are the ones with all the cash. You know what they say, "Mo' money, mo' snoozing." Right? Anyway.

National Sleep Week kicks off the first week in March, and the goal is to raise awareness on just how beneficial it is to get more sleep. We are a nation of hustlers, and hustling is not a 9 to 5 job. It's constant. We stay up late, we push too hard, and we suck down all the energy drinks while trying to fight nature and stay awake. And we need to stop all of that immediately. Sleep resets everything in our bodies, and it's just as much of a survival requirement as food and water. Here are some important reasons to get more sleep, and some of them might surprise you.

1. Because sleep keeps you alive

Recent studies have found a direct link between insomnia and heart attacks. Lars Erik Laugsand, a researcher at the Norwegian University of Science, told EverydayHealth that the reason for that could be the increase in blood pressure and hormonal changes that occur with insomnia. So for the love of God, get off of Twitter at a reasonable hour before your heart explodes.

2. Because you need sleep to be creative

Researchers at Harvard University and Boston College found that the emotional side of memories seem to strengthen during sleep, as reported by the Huffington Post. Creativity is essentially the result of when your brain and emotions collide and pour out of you, so if you have a creative job, all-nighters are a definite NO.

3. Because bad decisions occur when you're too tired

You know, decisions like, Yeah, I could totally use a year's worth of Wheat Thins in one order, or I don't have time to go to the salon, but I can figure out how to cut my own hair. Do yourself a favor and just go the f*** to sleep before you do something that makes zero sense in the light of day.

4. Because sleep makes you better in bed

"I'm too tired" is the most common excuse for skipping sex. And it doesn't matter if that's a B-S excuse or not. Exhaustion hinders your senses, changes your mood, and essentially robs you of a perfectly fun evening of sexy time. Hit the sack early so you can be alert and eager to hit the sack in a very different way the following day.

5. Because all the cool people are doing it

Athletes do it because it can improve their performance and endurance. The pretty people of Hollywood do it because it can preserve your skin and battle signs of aging. They do it for specific reasons that impact their jobs and lifestyles, but you should do it too for those reasons and more.

Example? Bill Gates once said in a Microsoft FAQ, “I like to get seven hours of sleep a night because that’s what I need to stay sharp and creative and upbeat." Sounds like good incentive to me!

6. Because sleep adds years to your life

A 2010 study of women ages 50 to 79 showed that more deaths occurred in women who slept less than five hours a night, whereas women who slept more than six and a half hours per night had more improved health benefits.

7. Because sleep can protect against depression

Lack of sleep can lead to hormonal changes, a weakened immune system, and a litany of other health problems, including depression. Try out an early bedtime, and keep the grumpies far far away.

8. Because sleep reduces inflammation and pain

Inflammation is generally bad news, as it's linked to diabetes, heart disease, arthritis, and more. In fact, research has shown that people who get less than six hours of sleep per night have higher levels of inflammation blood proteins than those who sleep longer.

9. Because zombies are never cute

Lack of sleep messes with your body's ability to rebalance hydration and everything else that goes on during a full night's sleep. Aside from the serious health issues that sleep can protect against, lack of sleep sucks the natural beauty right out of your skin and can lead to multiple skin issues. And you deserve better than that.

More like this
This Psychological Effect Might Be Keeping You From Hitting Your Goals
By Lexi Inks
The 5 Best SLS-Free Toothpastes, According To Dentists
By Amy Biggart and Danielle Calma
Here's Your Daily Horoscope For October 5, 2022
By Mecca Woods
The Meaning Of Angel Number 777, According To An Astrologer
By Brittany Beringer
Get Even More From Bustle — Sign Up For The Newsletter