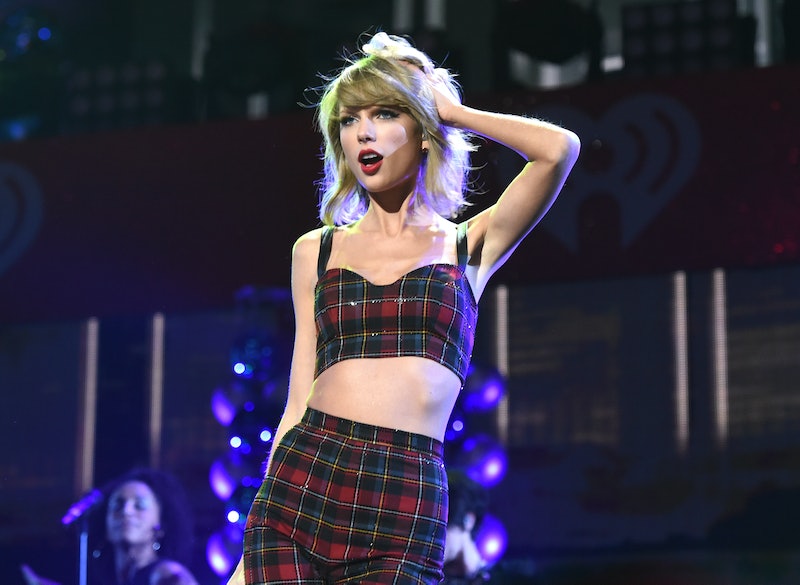 If you haven't noticed yet, Taylor Swift tours are kind of a big deal. I mean, when Taylor Swift Instagrams something it's a big deal, so you can understand how epic her tours are. So, if you're headed to a show date, it's important to plan what to wear to a Taylor Swift concert — you never know if she'll be lurking on your pics after the event. Swift's 1989 tour has been sold out for months, even though it doesn't kick off until April 5. Oh, and she's touring with Haim (AKA her BFFs) and Vance Joy and Shawn Mendes. No big deal. Just three of the most famous musicians/groups in the world coming together for a casual little world tour. But let's be honest — Taylor could have been touring with no one at all and tickets would have sold out in no time. She's a superstar. And if you're one of the lucky ones to have snagged a ticket to a show during the tour, then you've probably already started a countdown to the big night. This is Taylor Swift we're talking about, guys. So one big question remains: What are you going to wear to the concert?

Swift is a fashion darling to say the very least, and ends up on the best dressed list all the time. And her tour costumes/outfits? Always amazing. So what you wear to a Taylor Swift concert isn't just going to be a regular girl's night out dress. It has to be something memorable and special right. I mean, you paid a bagillion dollars (rough estimate) for those tickets, so you might as well put your best fashion foot forward. Here are nine outfit ideas to get you started.

In case you haven't been inspired by Taylor's sometimes-bohemian sense of style yet, now's your chance to rock a giant floppy hat and a short, flowy dress. This look would keep you comfortable, while still looking on-trend and cool.

How much cooler could you get at a Taylor Swift concert than wearing a Haim concert tee, am I right?

If you're going to go to a concert and go for an all-out feminine look, then a Taylor Swift tour might be the place to do it.

The great thing about going for a street style chic look is that it's simple, cute, and 100 percent comfortable. You don't want to be in 4-inch heels through an entire concert OR look like you're trying too hard, so this look is perfect.

5. What Would Taylor Wear?

Because why not dress in an outfit Taylor herself would wear?

You paid a million dollars for these tickets, so go ahead and go all out. Sure, your feet will be in pain for the majority of the evening, but hey, at least you'll look fabulous. That's all that matters.

More like this
Taylor Swift Wants To Direct A Movie Next — But You Might Have To Wait
By Radhika Menon
Everything To Know About Taylor Swift’s 10th Studio Album, 'Midnights'
By Grace Wehniainen and Jake Viswanath
Taylor Swift’s Latest Midnights Look Went Heavy On The Glitz
By Allie Fasanella
These Are The Best Socks A Woman Can Buy
By Lisa Fogarty
Get Even More From Bustle — Sign Up For The Newsletter