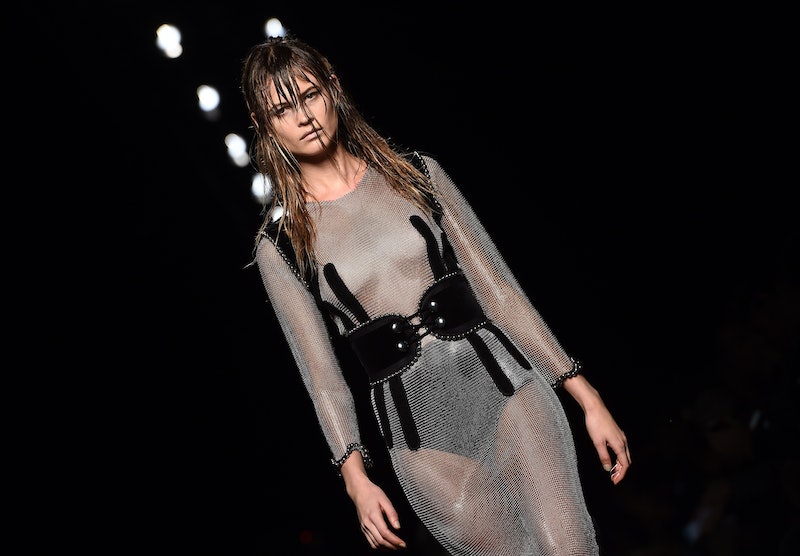 Fashion is cyclical, so the saying goes, and the pendulum often swings between the demure, polished look of Audrey Hepburn and the daring, uninhibited style of Joan Jett. Call it a result of Fifty Shades of Grey, the Grease Phenomenon, or simply a result of high-low street style, but fashion is increasingly interested in a mashup of the good girl and bad girl in one complex look. This archetype would think nothing of wearing a leather biker jacket with a tulle ballet skirt to brunch, a transparent top with wool trousers and a blazer for drinks, or a micromini with a crisp white button down to meet a significant other's parents. But where did the imperative come from, and is it really possible to channel both looks in one ensemble without leaning too heavily in one direction?

Pop culture loves a complex female character who appears wholesome on first glance but reveals grittier behavior on closer examination, both sartorially and in behavior. In the early '90s it was the Sarah Michelle Gellar's steely-but-flawed lead character in Buffy The Vampire Slayer , who sported voluminous leather biker jackets over her homecoming dresses and carried weapons as accessories. By 1998, Sex and the City 's Carrie Bradshaw had joined the movement, pairing prim flared skirts with lengthy stretches of exposed torso and simple tees with skirts slit up to the waist. 2015 placed the finally impossible to ignore with the big screen interpretation of Fifty Shades Of Grey's Anastasia Steele, who is the ultimate good girl/bad girl; she literally hides her daring, submissive undergarments and toys beneath her designer wares.

Not only are fictional characters proponents of the good girl/bad girl paradox; fashion industry leaders and cultural tastemakers have slowly created the notion that women can have it all and should be it all. It's not enough for a woman to have success in her working and home life; she must also indulge in creative, recreational activities and dabble in some sort of edgy pastime to balance out whatever "basic" elements exist in her life. The duality extends straight down to the way a woman comports herself when dating. Katherine Heigl's 2009 romantic comedy The Ugly Truth best describes the immense pressure to embody the dichotomy when the smarmy Mike Chadway, played by an on-point Gerard Butler, succinctly states "You have to be two people. The saint and the sinner. The librarian and the stripper."

It seems that over the past 20-plus years, fashion and beauty has taken the humble idea and run with it. First Anna Wintour suggested the notion of high-low dressing, pairing a saintly beaded cross-embellished Christian Lacroix tee-shirt with sartorially sinful acid wash jeans on the cover of Vogue in 1988, and soon an entire industry followed suit. If a dress was rendered in tweed, it needed to be cut above the knee to stay away from ladies who lunch territory, and if one decided to wear a sultry smokey eye to dinner, it needed to be balanced with a demure nude lip. In fact, the beauty and fragrance industries are perhaps the biggest proponents of the good girl/bad girl phenomenon. Cult favored perfume brand Kilian debuted a fragrance entitled Good girl gone Bad as part of its In The Garden Of Good And Evil collection, which the company claimed embodied both sweet and edgy facets of the personality by tempering rose de may and tuberose with amber and cedar. Meanwhile, Agent Provocateur followed suit with its Fatale fragrance, a heady blend of pink pepper, musk, gardenia, chocolate, and mango which was marketed towards successful, driven women with a roster of racy after-hours activities planned on any given day.

And on the Fall 2015 Fashion Week runways, the good girl/bad girl paradox reached its zenith, with looks so incredibly regal they would be fit for Kate Middleton masking seductive accents. Alexander Wang's runway was most overt in its sensual deviance, displaying an incredible amount of skin under sheer fabrics and with deliberate nods to BDSM culture from corset belts to chain detailing. Joseph Altuzarra has made a significant impression on the fashion industry with his usage of eye-catching fabrics molded into his signature slit skirts, but always with an elegance that keeps the look from veering into lewd territory. Blumarine's latest collection featured incredibly heavy, voluminous fur coats on top of completely bare legs, taking the dichotomy in a more pared-down direction but with the same basic principle of polarities combined in one look. And Fausto Puglisi took the opportunity to tantalize his runway audiences with beautifully bright hues, clusters of embellishment, studded leather jackets, and of course scantily clad skin.

While editorial spreads, runways, and department store beauty counters are in favor of the daring good girl/bad girl paradox, trying the everlasting trend in real life is much trickier. Take one step too far into sultry territory with top cut down to there and your audience may immediately label you a coquette, but if you stick to thick, wool circle skirts and prim cardigans you may miss out on the sartorial fun. In a culture so quick to judge, it is difficult to navigate the fine line between good girl and bad and find the socially acceptable happy medium. However, if the runways and beauty counters hold their course, it may be time to make peace with adding black pleather and knee-high boots to your collection of sweater sets and pencil skirts.