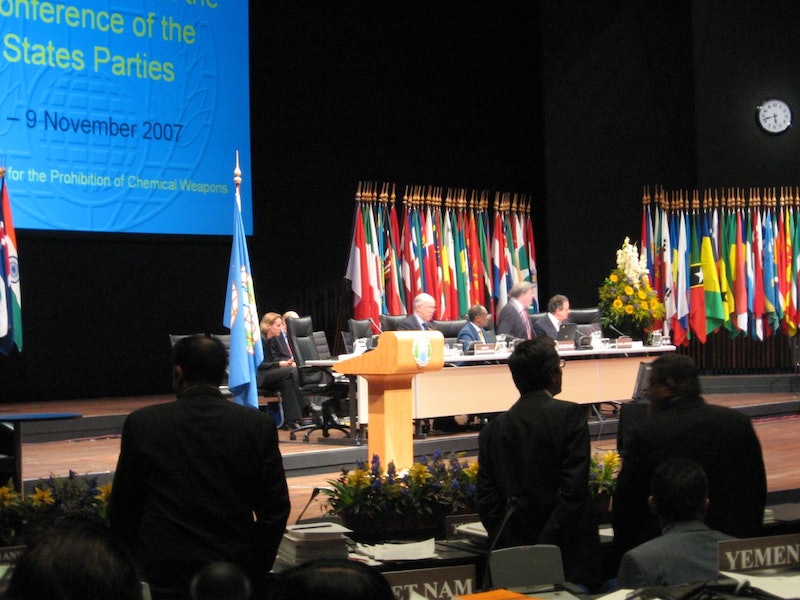 In an out-of-left-field win, chemical weapons watchdog Organization for the Prohibition of Chemical Weapons (OPCW) received the Nobel Peace Prize this morning for their work to rid the world of chemical weapons. After decades of relative obscurity, the organization's work has been brought into the spotlight this year because of their role in Syria's disarmament.

Based in The Hague, OPCW employs experts who "inspect and destroy the arsenals of its 189 members" as part of ensuring compliance of chemical weapons laws. They come into action as a sort of last-ditch diplomatic resort only when bilateral negotiations fail between parties and only at the request of another member state.

One of the heavyweights at OPCW is UN Chief Weapons Inspector Åke Sellström, who, as head of Unscom, led a task force after the Gulf War to locate Iraqi chemical weapons. Most recently, he also led a team to Syria in September to inspect their chemical weapons and confirm the use of sarin nerve gas in August's chemical weapons attacks. It's because of this confirmation that a team is now in Syria now to dismantle the weapons stockpile.

It's thought that the prize is "as much as anything a tribute to him" as it is to the organization. Of course some people are griping that Sellström is Swedish, and OMG so is the Nobel Peace Prize, but that's sort of like London hosting the Olympics and taking crap because some of their athletes won the gold. Guys, good things are going on here.

But it looks like OPCW was in the lab this morning when the prize committee called them to tell them the good news.

Good thing someone let them know.

OPCW's next task is to figure out exactly which technology should be used to destroy Syria's arsenal, a mission that will ultimately take eight months and be completed by mid-2014. They have until Nov. 18 to decide.

Most Noble Peace Prize speculators had focused on two other top contenders for the prize. Congolese surgeon Denis Mukwege and his colleagues treated more than 30,000 women gang-raped and tortured during the civil war. After an assassination attempt this year, he returned to the Congro to continue treating patients.

There was also of course Malala Yousafzai, the recent EU human rights prize winner, whose ongoing campaign for girls' rights to education received incredible amounts of publicity. However, some, including Yousafzai, think that as the youngest nominee in the prize's history, it was a matter of age for the teen activist.

But Yousafzai's not too bothered. Instead, she has her eyes set on Pakistan's top position: Prime Minister.