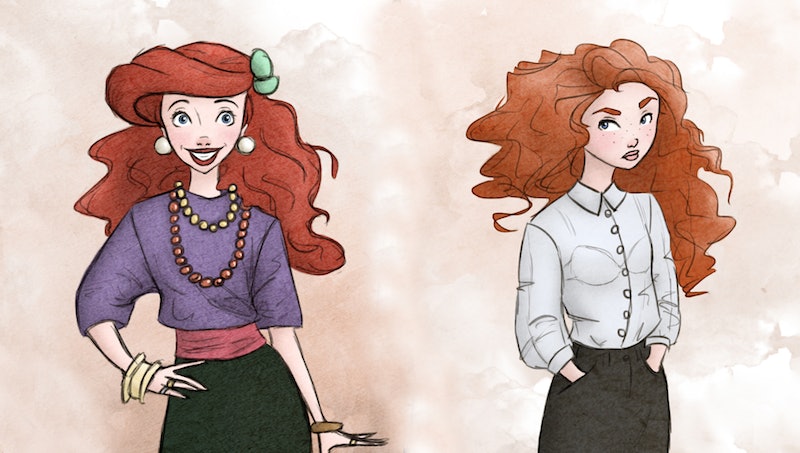 Princesses: You either love them or you hate them. For some people, the fantasy worlds in which Aurora and Jasmine live make their eyes light up. For others, the mini-waistlines and prince-dependency cause the claws to come out. One thing that we all can agree upon, however, is that fairytales are not real life. They are dreamed-up stories and what we see on our screens are just actors portraying these princess characters. But that doesn't mean fantastical tales are void of merit, right?

How about — for just a moment — you imagine Ariel actress Jodi Benson getting up every morning and sitting in a prosthetics makeup chair for hours getting her tail and sea shells attached (sure, The Little Mermaid wasn't live action, but let's pretend that it was). What do you think Jodi would have wanted to wear on her days off circa 1989? Well, one Swedish illustrator was curious about that very question, and has in turn created artwork that gives us an exclusive look at our favorite princesses out of costume ! Beatrice Lorén took it upon herself to dig up top secret, behind the scenes photos from the filming of our favorite princess movies to magically transform them into this marvelous work of art. What I love most about the series is that you can imagine what the world looked like when the films first came out. You can picture girls sitting at the movie theatre in these clothes watching the princesses for the first time.

I can already hear some of you shouting: Where are Eiowyn, Megra, Esmeralda, Kida? Well, Lorén based her work on this official vs. unofficial lineup of Disney princesses, and unfortunately they're not on the former roundup. Princesses Anna and Elsa have not yet been included in the official princess list either, and Lorén has said that she is not planning on updating the drawing should the princess list be added to in the future.

Side note: The year numbers you see below are written in the most popular fonts from the years in which the films were released as well. So clearly, this girl has done some serious research!

Using older actresses to play younger roles is something that still happens to this day. The character Snow White was 14 years old in the story and she is the youngest Disney princess. Looking at her dress sense here, I would guess that she was in her 20s when she played the role. Cinderella is depicted with her natural strawberry blonde hair (even though these days she has an even blonder dye job) and I hope she knows that there is nothing wrong with being a redhead!

I love Ariel's look as well. She is so fun and 80s, and now that I think about it, I was wearing almost exactly those clothes yesterday! Who needs ballgowns?

Anyone who was conscious during the 90s will know who the number one style icon was at that time. The actress who played Pocahontas was obviously a big fan of Clueless — just like the rest of us! I also love that she is drawn taller than the other princesses because Disney tends to make them all the same height — even though Pocahontas was obviously a statuesque and lovely lady! I think she wears this style better than Cher Horowitz ever did!

Rapunzel in fake hair shocker: It was a wig the whole time! Well come on, you didn't seriously believe that anyone could really have hair that long, did you? Merida looks like she is a huge fan of Lorde, and it doesn't really surprise me. They are both strong, independent women doing what they want with their lives.

Just in case you missed a couple of princesses while growing up, here are the actresses in costume. (Play along, I'm nearly finished!) Snow White, Ariel, Belle, Pocahontas and Merida (and of course Anna and Elsa) are close friends of mine. We have spent a lot of time together and I personally can't wait to meet their fellow (if not official) princesses, too.