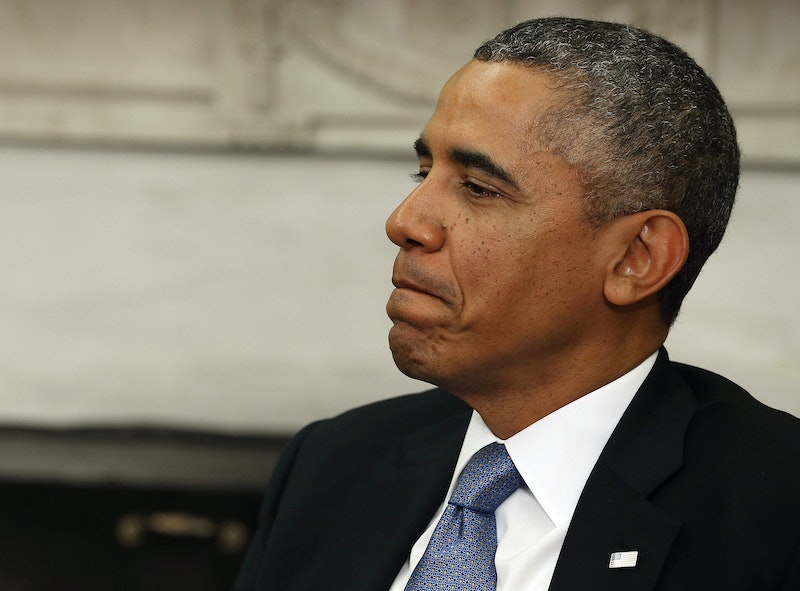 The U.S. government must be feeling pretty relieved right now that they didn't just swoop in and topple Bashar al-Assad's regime to give control to the rebel forces. A new report by Human Rights Watch suggests — "strongly" — that they, too, committed crimes against humanity. The watchdog group found that rebels executed whole families during raids on Alawite villages.

Alawites follow a particular school within Shia Islam and are a powerful religious minority in Syria. The Assad family also belongs to the sect — and its ally, Iran, is also dominated by Shia Islam. Much of the opposition, in contrast, is Sunni. Earlier in the Syrian civil war it had been suggested that the Assad regime is guilty of genocide for targeting Sunnis in Syria, but as we reported, experts believe his violence is motivated more by an instinct for self-preservation and a lust for power than by religious incongruities.

The rebels, originally comprised largely of a Syrian political opposition, now feature many jihadi fighters from abroad. Many of the fighters subscribe to the notion of takfir — they declare other Muslims apostates if they don't subscribe to their ideology. As apostates, those other Muslims can be killed. It's hardly a surprise, then, that Human Rights Watch was able to find and document such killings.

In total, the organization was able to name over 190 civilians killed by the rebels in raids on Alawite villages, though it acknowledges there may be many more unnamed victims. "Eight survivors and witnesses described how opposition forces executed residents and opened fire on civilians, sometimes killing or attempting to kill entire families who were either in their homes unarmed or fleeing from the attack, and at other times killing adult male family members, and holding the female relatives and children hostage," the report said.

The thing that makes the situation even murkier is that the allegiances of the rebel groups, and the groups themselves, shift constantly in Syria. The report said more than 20 groups participated in the raids, but none of the named groups are part of the Western-backed Supreme Military Council of the Free Syrian Army. The leader of the group, however, said at the time that his members participated in the attacks.

"The evidence strongly suggests that the killings, hostage taking, and other abuses committed by opposition forces on and after August 4 rise to the level of crimes against humanity," said the report, noting that many of the 190 named dead appeared to have been killed "indiscriminately."

Meanwhile, the Organization for the Prohibition of Chemical Weapons, which is working to disassemble the chemical weapons infrastructure used by the Assad regime for its very own crimes against humanity, was awarded the Nobel Peace Prize Friday.