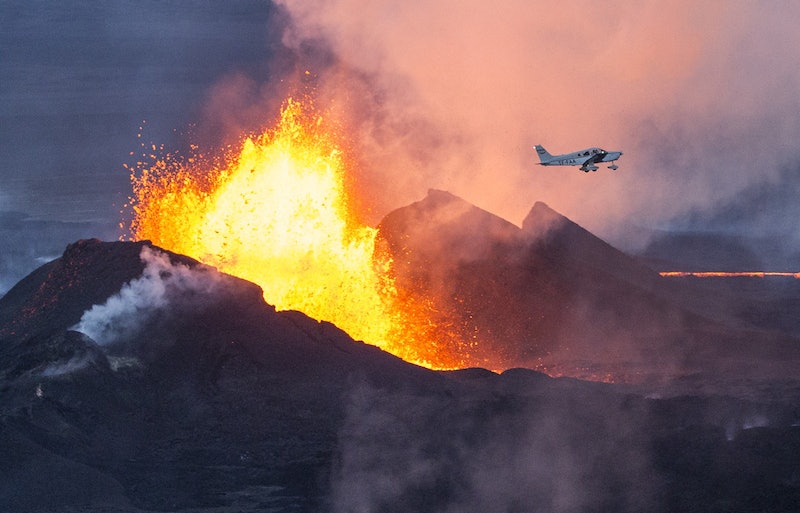 Remember when you were a kid and approximately one third of the time, the floor was "made of lava"? (Another third of the time, it was quicksand and the last third, it was just regular floor because, come on, a girl's gotta sleep.) Most of us were obsessed with lava as kids (and always kind of will be), which is completely understandable: Lava is terrifying, beautiful, and a surface reminder of the vicious hellscape that lies below the surface of our planet. Pretending the floor was lava just seemed like good practice. When I was little, I thought lava was going to be a major force in my life moving forward. I figured, "Okay, when I grow up, probably in high school, I am going to get into a situation AT LEAST ONCE where I am going to have to hop from stone to stone in order to avoid lava that will inexplicably appear somewhere in rural Connecticut." Thus was my kid logic.

Action movies and travel shows about Hawaii did absolutely nothing to dispel me of this idea. But high school and college came and went and I still have not even seen lava in person. Not once, and I lived in New York for years, where you see just about everything else on the regular and act like it's nothing. I'm not going to say I'm disappointed, but I'm not NOT disappointed. I just kind of assumed I would encounter lava by this point in my life.

All of which is to say: Lava has always held me captivated, a feeling I assume I share with every former child, which is why I dare anyone not to be completely drawn in by this totally insane video of filmmaker and explorer Sam Cossman and his team delving into the Marum Crater on the island nation of Vanuatu.

These people are more than a little badass. They brave lava...

...ridiculous temperatures (It can get up to about 1,000 degrees at the mouth of the crater)...

The team gathered images and samples that will enable scientists to learn more about the volcano, volcanic life, and the origins of the formation of the world.

But no truly great scientific discovery comes without some kind of sacrifice. In this case, let us give a big RIP to two of the drones involved in the filming of this incredible footage; They were unable to withstand the extreme temperatures, unpredictable winds, and air gusts of the volcano.

If science fiction has taught me one thing (and rest assured, it's taught me many), it's that robots are capable of human emotion, and as such, their deaths were probably fiery and terrifying. More than likely, their robot brethren will avenge this selfish act of human barbarity. But I will contend that they did not die in vain—just look at the images of the crater scientists were able to recreate thanks to the drone-obtained images.

(Side note: Is it me, or does this look like a pair of craggy, misshapen boobs?)

In honor of these proud and noble fallen robots, watch the full video below.