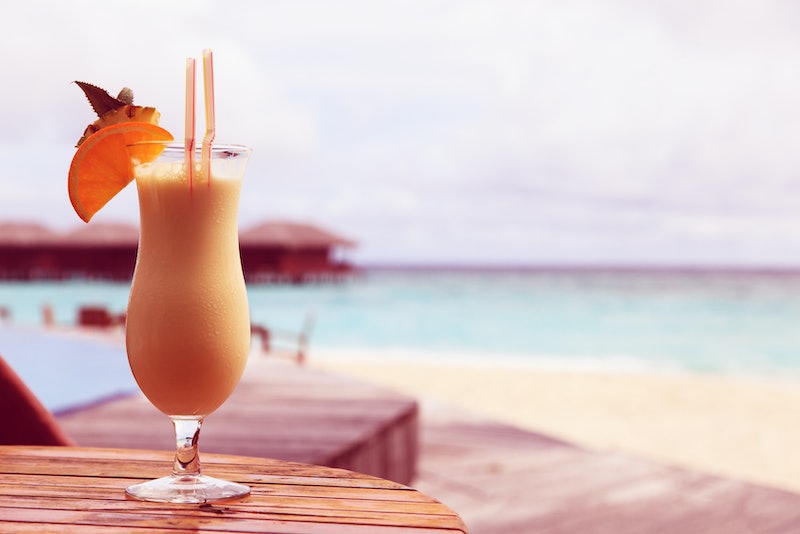 Whether in daiquiri, hurricane, or mojito form, the warming qualities of this quintessential spring break spirit will melt your troubles faster than you can say "put it on my tab... and keep it open." But before you plunge face first into your plastic highball of Bacardi and lime, why not take a minute to educate yourself on the origins of the distilled tropical delicacy you'll be consuming via poolside cabana between the hours of 11 a.m. and 4 p.m. over the course of the next five days? And because I know that right now, at the height of your collegiate/corporate stress, the thought of one additional minute of research makes you want to quit the Internet and humanity altogether, I've taken the liberty of compiling a list of fun rum facts — covering history, etymology, and my favorite, mixology — so you can drop some serious spirited knowledge while sipping on that swim-up bar Mai Tai at high noon.

1. The precursors to rum date back to ancient India and China where fermented drinks were produced from sugarcane.

2. The first distillation of rum took place in the 1620s when Caribbean sugarcane plantation slaves discovered that molasses, a byproduct of sugar refining, could be fermented into alcohol.

3. The first North American rum distillery was established in 1664 in what is now Staten Island.

4. Hailing from Barbados, Mount Gay prides itself on being the oldest existing rum company in the world dating back to 1705.

5. Although the origin of the word rum is widely disputed, some etymologists argue that it was taken from the last syllable for the Latin word for sugar saccharum.

7. British legend says that Vice Admiral Horatio Nelson's body was preserved in a cask of rum before being shipped back to England. Later, it was discovered that a hole had been drilled into the bottom of the cask so that all of the sailors could drink the rum before the cask's arrival. Thus, the moniker "Nelson's blood" was born.

8. George Washington was quite the mixologist — he was well known for his Mount Vernon eggnog, which he fortified with dark Jamaican rum.

9. Eighteenth century sailors were often paid in rum. To test the rum's authenticity, they allegedly mixed it with gunpowder — successful ignition indicated authenticity.

10. In the 1800s, rum was highly revered as a go-to beauty product for its ability to clean hair and strengthen its roots.

11. In hopes of preventing scurvy, the British Navy gave rations of rum to its sailors until the 1970s (but it was actually the addition of lime — i.e. vitamin C — that kept the scurvy at bay).

12. Black Tot Day became a thing on July 31, 1970 when the Royal Navy decided to put an end to its daily rum rations for its sailors.

14. The portion of rum that is lost to distillation over time is called the "Angel's Share" — literally the portion given to the angels above.

18. Jamaica's Wray & Nephew currently owns the most expensive rum in the world — there are four remaining bottles from the 1940s going for $40,000 a pop.

More like this
Craving The Beach? Here's Your Guide To A Solo Vacation In Turks & Caicos
By Alexis Morillo
You Can Stay At The 'Hocus Pocus' House On Airbnb
By Alexis Morillo
TikTok's Butter Board Might Be The New Cheese Plate
By Emma Carey
Deliveroo Is Selling Lotus Biscoff Cinnabons Now
By Darshita Goyal
Get Even More From Bustle — Sign Up For The Newsletter