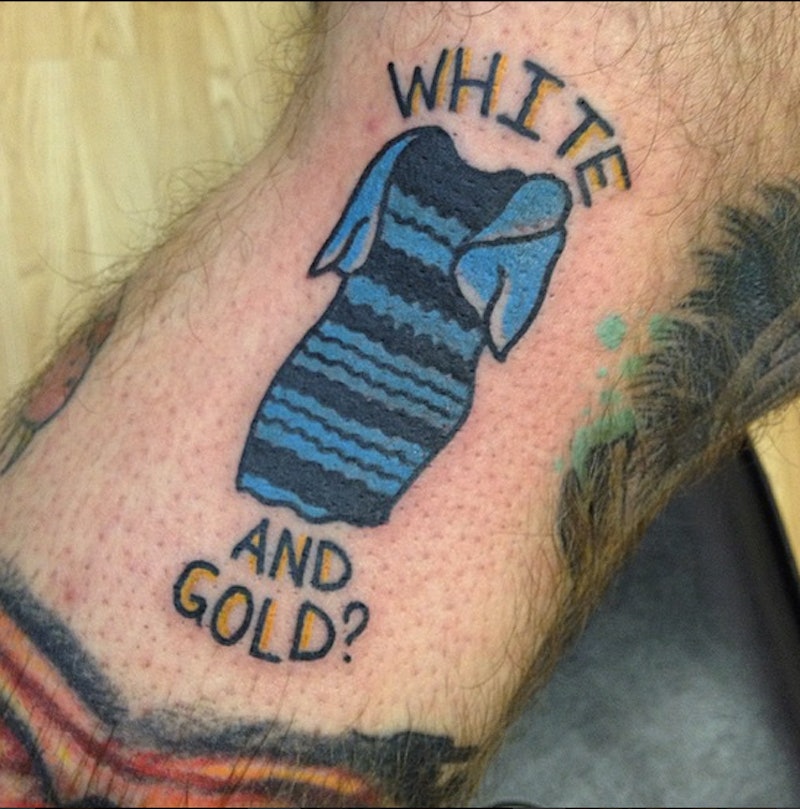 It's been a hot minute since "the dress" took over the Internet/all of our lives and caused us to argue with every single person in our social circle (or complete strangers). Oh, and just in case you live in a deep, dark, disconnected corner of the world—"the dress" popped up on the Internet recently, and the weird optical trick that makes some people see it as white and gold and others see it as black and blue soon after confused and frightened all of us. Even though we think we've gotten to the bottom of exactly what was going on with the optical illusion and what colors the dress actually is, you're still bound to see it pop up on social media every now in then. Or, maybe, if you're lucky—you might just see it tattooed on Daniel Howland's arm. Yes, a man has now tattooed THE dress on his leg because, hey, why not?

According to BuzzFeed, Howland is no stranger to tattoos and had some extra space on his leg so he "didn't see a reason not to." Howland's tattoo artist, Nick York, admitted that, yes, it may be a stupid tattoo, but that's what makes it work.

"That's why it's funny, because it's stupid," York told Buzzfeed.

So here's to all of you people who spent an entire night out of your lives arguing about the dress only to finally end all of the confusing, universe questioning arguments with, "Whatever. This will all be old news in the morning." For Daniel Howland, the dress will now live on forever. And OK, yeah, it might be a little stupid for a tattoo, but it's a good story to say the very least.

Oh, and if you're wondering (I know you are), Howland says he initially saw the dress as black and blue, but has seen it as white and gold a few times as well. See? He saw both sides, considered it all, and decided to tattoo it on his body anyway. I mean, bonus points for creativity at least, right?

More like this
12 Absolutely Angelic Cherub Tattoo Designs
By Paris Giles
Why TikTok Is Obsessed With Caesar Salads Right Now
By Alexis Morillo
TikTok's Butter Board Might Be The New Cheese Plate
By Emma Carey
On TikTok, Tinned Fish Date Night Is The Latest Viral Food Obsession
By Emma Carey
Get Even More From Bustle — Sign Up For The Newsletter