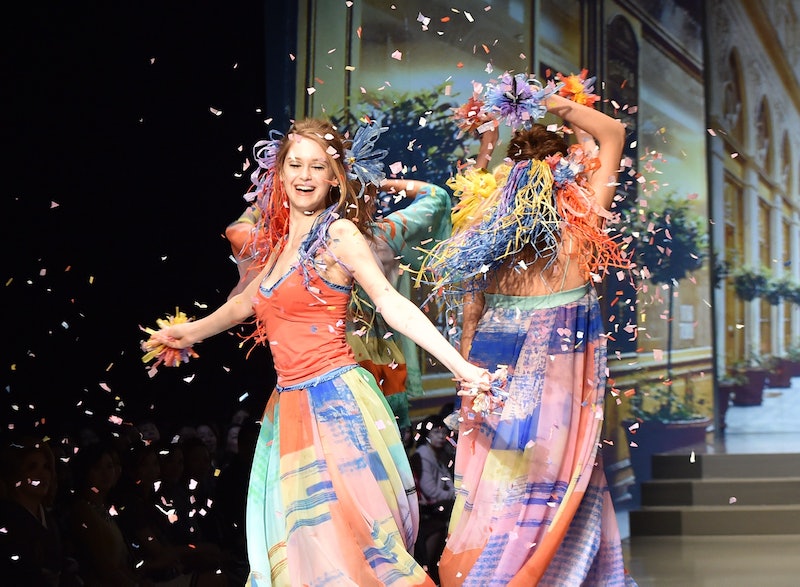 For the most part I don't envy you Midwesterners and East Coasters. Who would choose such brutal winters? And yet, aesthetically, I am a tiny bit jealous. Growing up in a seasonless place is sad. Places sans seasons, like my beloved California, don't have the romance of a cycle. We're missing out on something ancient. Mythologies — rich systems of stories and symbols — follow the seasonal cycle. Certainly religion does: Each faith is accompanied by an individual calendar full of holidays and associated legends. (Note that I discuss mythology and religion as interchangeable, not because I think religion is "false" or a farce, but because they create cultural meaning in the same way. Don't interpret "legend" as "made-up story.")

Okay, obviously fashion doesn't control the weather. (Don't quote me on that.) The concept of "fashion" originated looong after thunderstorms. But mythology gets its power from belief. There's a circle here — a circle of how culture makes itself. When you believe, it means something, and it wouldn't mean anything if you didn't believe. Accordingly, my idea of "springtime" incorporates pastels and florals, plus vice versa. Describing a tautology is necessarily redundant: Spring is pastels and florals; pastels and florals are spring. They equate each other. Would spring arrive without the pastels and florals? Yes, sort of, but then "spring" would mean something different. I assume there's a parallel universe where spring is all about, like, deep purple cowboy hats decorated with snake patterns. In that universe, spring is a phenomenon we wouldn't recognize.

Masturbatory intellectual stuff aside, this double association makes life better — more fun. Incorporating mythology into my everyday life concretely improves my experience. I realized this in December 2014, when I was talking about Christmas with my therapist. All the festive feelings, the decorations and baking, pepped me up no end. I suffer from depression, so whenever I notice unusual up-pepping, I want to figure out the source and try to replicate what happened. My conclusion was that ritual just... feels good. I like to have a repeating schedule, on a daily basis, on a weekly basis, and apparently on a yearly basis as well. It behooves my mental health to make a big deal out of spring fashion! How cool is that!

On Style.com, Nicole Phelps wrote of Valentino's Spring 2014 Ready-to-Wear show that the "muse is no longer a girl with a pearl earring. She's a mythological sorceress." Phelps predicted that the audience of celebutantes would "rush to get the more ornate pieces... a dress patched together from silvery squares that looked like armor, a monastic romper... in organza embroidered with tiny strips of leather." Note the references to medieval, even Arthurian, imagery.

Also on Style.com, Tim Blanks described Dolce & Gabbana's Spring 2014 Menswear presentation, which was inspired by Sicilian motifs and thus Greek mythology, "as fantasy, as escape." I view mythology and myth-minded fashion the opposite way: It is all the more relevant to our mundanities because it harkens back to ancient themes. The esteemed scholar Joseph Campbell began his book The Masks of Gods: Primitive Mythology by saying:

"The comparative study of the mythologies of the world compels us to view the cultural history of mankind as a unit; for we find that such themes as the firetheft, deluge, land of the dead, virgin birth, and resurrected hero have a worldwide distribution — appearing everywhere in new combinations while remaining, like the elements of a kaleidoscope, only a few and always the same."

In essence, mythology is universal. It unites us across centuries and continents. We are forced to see common humanity across ethnic, racial, and economic divides. This is what people do: We create stories about the deeper conflicts of our lives. Such stories resonate in perpetuity, and when we pay attention to them, legends enrich our lives. Spring fashion is meaningful not because it's pretty, although that's nice, but because spring symbolizes rebirth, new life. The darkness of winter starts to dissipate and the flowers bloom again. We are reminded that although it is natural to screw up, or to be sad, it is also natural to heal and rise again. (Protip: Also the subtext of Easter.)

Weather regardless, the mythology of spring is almost here. As blogger Liz Stanley of Say Yes wrote in 2013, reiterating what we all agree on, "I love spring fashion — bright colors, bold patterns, and a great time to try new trends you've been seeing around." Two years later, that isn't any less true. I'm telling you: Pastels and florals.

More like this
13 Spring 2023 Fashion Trends That Feel So Fresh
By Allie Fasanella
The Official New York Fashion Week February 2023 Schedule Is Here
By Dominique Norman
Phoebe Dynevor Serves ‘Bridgerton’ Underboob In Stunning Floral Gown
By El Hunt
Marianna Hewitt’s Advice For Building A Personal Brand
By Taylor Jean Stephan
Get Even More From Bustle — Sign Up For The Newsletter
From hair trends to relationship advice, our daily newsletter has everything you need to sound like a person who’s on TikTok, even if you aren’t.