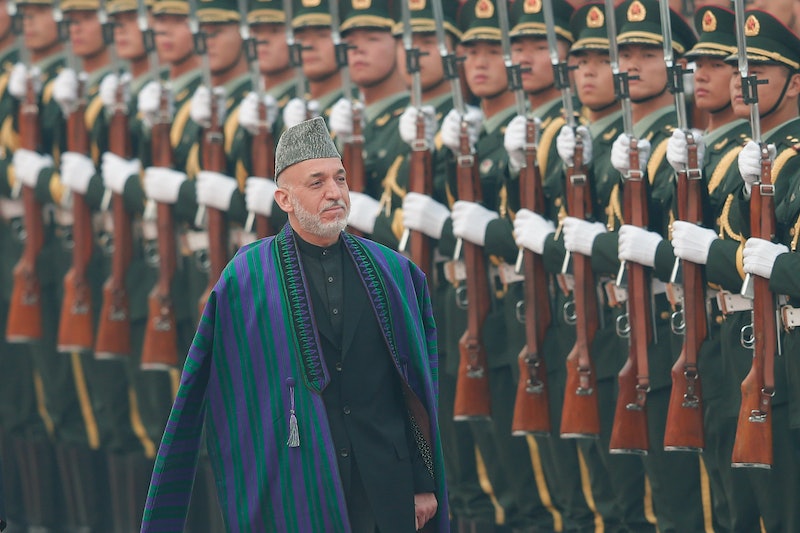 Secretary of State John Kerry swung by Kabul on Friday to try to further negotiations on keeping American forces in Afghanistan beyond next year. The deal, which has to be made by the end of October, has been sidetracked by increasingly tense relations with the Afghan leader Hamid Karzai. Afghan leadership wants guarantees against future foreign intervention in the country, which lies in a volatile region of the world and has a largely unsecured border with Pakistan.

But without a deal, the U.S. would have to withdraw remaining troops after 2014, effectively ending all counterterrorism and counterinsurgency missions. Karzai said that international intervention violates the country's sovereignty and causes suffering to the people. "On the security front, the entire NATO exercise was one that caused Afghanistan a lot of suffering, a lot of loss of life and no gains, because the country is not secure," he told the BBC.

State department officials, meanwhile, say that Kerry's trip is "really about us building momentum for the negotiators and helping establish conditions for success of the negotiations going forward." The secretary is not expected to hammer out an agreement himself. "The ball remains in the Afghans' court... Time is of the essence, the longer it goes, the harder it is to plan," another official said.

The United Nations had just extended the NATO force's stay in Afghanistan Thursday, although the 87,200 troops — mostly American — have decreased significantly in numbers from even two years ago.

Part of the reason for the impasse is vastly different expectations for what a post-NATO relationship would look like between the United States and Afghanistan. Afghanistan wants all counterterrorism intelligence handed over to their forces, who would then handle it on their own. It also wants to be treated like a NATO ally — which U.S. officials fear could force American troops to go on raids to nuclear-armed Pakistan.

Karzai has indicated that he won't back down from his demands, and that the U.S. forces are free to withdraw if they can't meet them. The trouble is that the Taliban is still a strong presence in Afghanistan, and the country's economy is frail. The consequences of a complete withdrawal could be disastrous.

U.S. troops, meanwhile, have captured a senior commander of the Pakistani Taliban and are holding him in Afghanistan. Some say the capture is a "significant blow" to the organization, but Karzai's office has not yet released a comment. Those in the know say the detention by American forces may be a contributing factor to the stalled negotiations and to tensions with Karzai.

President Barack Obama had previously set the deadline for striking a deal to October 31.