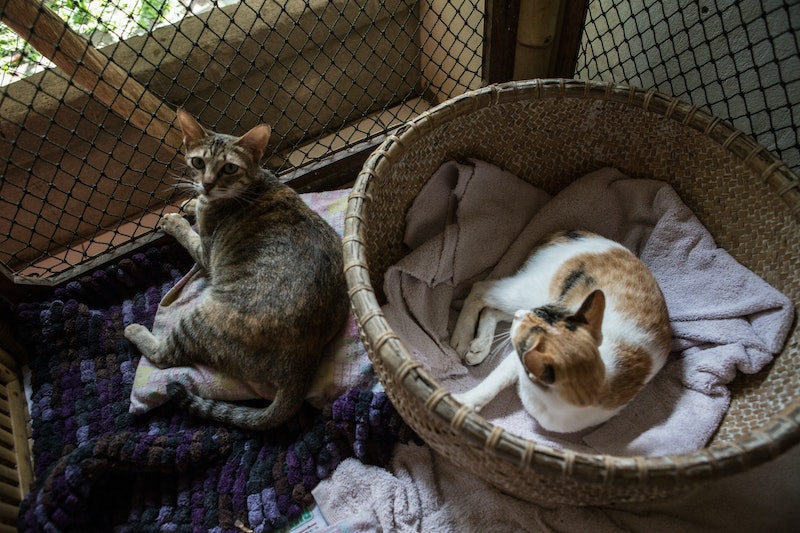 If there's one thing the Internet loves unequivocally, it's cats (and also bacon). In light of this knowledge, I'm pretty sure Reddit is going to lose its collective mind when it catches wind of the Lincolnshire Trust for Cats, a.k.a. a cat retirement home . Actually, forget Reddit — I'm the one losing my mind right now. It's everything I've ever wanted in life, situated on the greatest seven acres in all of England. In times of trouble, I'm going to recall the existence of this blessed place and remember that the world isn't so bad. Can you tell I really miss owning a cat?But enough about my cat-less existence. While it's a sad reality that most pets pass away during their owner's lifetime, not many people plan for their pet to outlive them. Sometimes, however, that's exactly what happens, and the former owner's family is either unwilling or unable to take the pet in after its owner's death. Thankfully, that's where the Lincolnshire Trust for Cats, a home for cats who outlive their owners, comes in. According to Mashable, it currently houses 80 felines, but while that might sound crowded, the retirees actually live a pretty cushy existence.

The cats are free to roam the retirement home, which boasts "three centrally heated sitting rooms, enclosed outdoor areas, huge wendy house and several insulated houses for the less social cat" as well as plenty of places to sunbathe, according to the Lincolnshire Trust website. Newcomers are given their own room at first to adjust to living with a bunch of other cats, but the website states that "even cats that have never lived with other cats... adapt." All the cats are cared for 24/7 by an on-site caretaker, Mashable reports, and the Trust pays for any and all medical treatment once the cats join the retirement home.

As you can imagine, this doesn't come cheap, but it sounds like it's worth the fee of $1,300 to make sure your cat is taken care of after your death. The retirement home is just a small part of what the Trust does, too; it also serves as a rescue facility for homeless or abandoned cats. (You can donate here if you're interested.)

Now if you'll excuse me, I'm off to watch three hours of cat videos on YouTube. If this didn't make you want to hug a cat, I don't know what will.

More like this
You Can Stay At The 'Hocus Pocus' House On Airbnb
By Alexis Morillo
Craving The Beach? Here's Your Guide To A Solo Vacation In Turks & Caicos
By Alexis Morillo
TikTok's Butter Board Might Be The New Cheese Plate
By Emma Carey
8 Completely Unserious Tips To Make Your Cuffing Season A Success
By Ginny Hogan
Get Even More From Bustle — Sign Up For The Newsletter