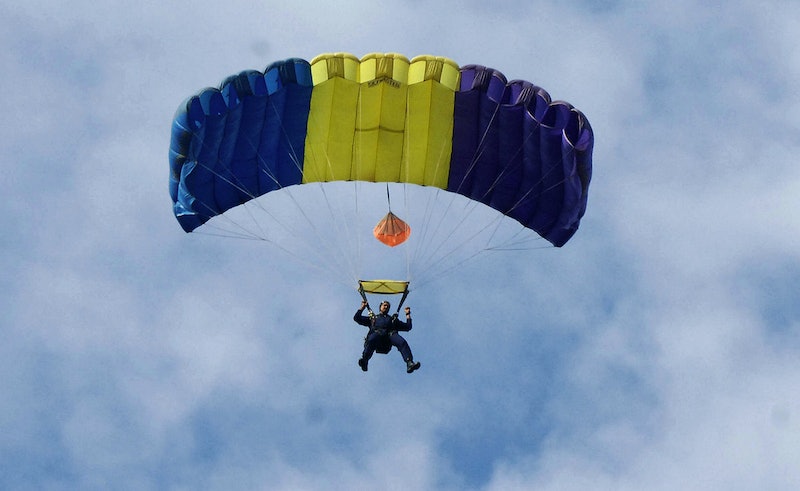 In case you needed another reason to never, ever jump out of an airplane, this video of a guy in skydiving training who suffers a seizure while he is 9,000 feet above the earth should do it. The man, identified in the video as "Christopher", exits the plane as normal, but pretty quickly it becomes clear that something is going wrong: He starts flipping over repeatedly in mid-air and seems to be flailing his arms and legs. The whistling wind and the flapping of his instructor's parachute offer an eerie soundtrack to what, at first, looks like it's going to be a very long fall with a horrific outcome. On his YouTube page, Nomadic Adrenaline, the jumper describes what happened:

Possibly the scariest moment of my life. On the 14th of November 2014 while doing stage five of my Accelerated Free Fall program I have a near death experience.

Stage five means he had jumped a few times previously, but wasn't quite ready to do a jump without an instructor, according to the U.S. Parachute Association. Its website compares the Accelerated Free Fall, or AFF training program to "learning to ride a bike with training wheels." OK, we'll go with that even though NO ONE EVER learns to ride a bike in mid-air at 9,000 feet. That's the point in Christopher's jump where everything goes awry, according to the YouTube post:

At around 9,000 ft I have a seizure while attempting a left hand turn. I then spend the next 30 seconds in free fall unconscious. Thankfully my jumpmaster manages to pull my ripcord at around 4,000ft. I become conscious at 3,000 ft and land safely back to the ground.

Just to back up for a second: How tall is 9,000 feet? It seems like a pretty serious distance, but it's a little hard to get perspective from this video, because all you can focus on is the EARTH HURTLING TOWARD YOU ZOMG.

For a little context, 9,000 feet would be approximately seven Empire State Buildings stacked on top of each other. Think about that next time you're walking through midtown Manhattan.

It's just over 9,000 feet to walk the entire length of the Washington Mall, from the steps of the Capitol Building to the Lincoln Memorial. That distance translates into just under two miles. Imagine instead of jogging during your morning run, you were falling from a plane the entire time.

Fortunately for Christopher, his instructor really knew what he was doing: A first attempt to grab the plummeting, unconscious skydiver fails, but on the second try, the instructor grabs his harness, latches himself to Christopher, and pulls his emergency chute.

Then, the scene ends abruptly.

According to the video, Christopher regained consciousness at about 3,000 feet and was able to land safely. Still, he dropped a long way while he was having the seizure. No word on whether he ever finished his skydiving training, but if he never stepped out of a another plane in mid-air again, it would be hard to blame him.