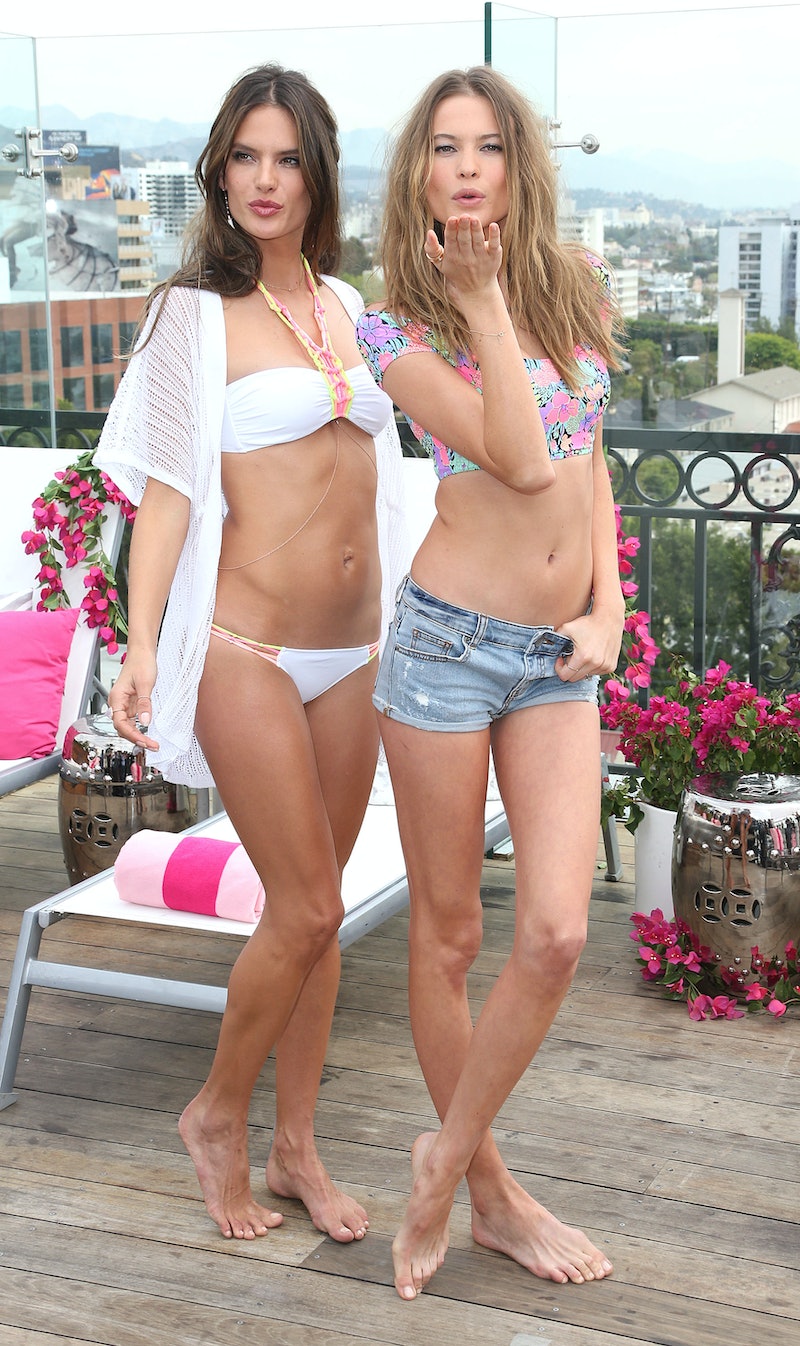 If pomp, circumstance and one-of-a-kind designer wings the size of most NYC living rooms are your thing, the first ever Victoria's Secret Swim Special, which aired last Thursday on CBS, may run a distant second on the list of VS events you love. The lingerie brand has, after all, become synonymous with its infamous fashion show, an event that annually interrupts our regularly scheduled holiday programming to bring an hour of fancy bras, panties and pageantry — a.k.a. wing-clad models walking down the glitteriest of all runways to tunes from the hottest musical acts of the moment — into our lives. Don't worry, only nine more months until the next one, ladies and gents. However, while I love an over the top spectacle and gratuitous use of sparkle as much as the next girl, there were plenty of reasons to tune in as the angels made their way off the runways and onto the sandy beaches of Puerto Rico.

First and foremost, the genius marketing team at VS put Adam Levine on a speedboat in the opening credits, so they had me at hello. Also, throughout the show, Levine and his Maroon 5 bandmates gave two live performances at what is now the bonfire of everyone's dreams — seriously, beach life goals. Man candy aside, albeit always a welcome addition to any of the lingerie giant's televised events, the behind the scenes footage and corresponding model interviews showed the world the unbelievable amount of hard work that goes into producing the swim catalogue — even though it seems to simply appear in mailboxes across the country.

Viewers were also given the chance to see famed photographer Russell James work his magic while witnessing the brand take a step in the right direction, promoting fitness, confidence and strength as the new sexy. So, while the runway will likely always hold our VS hearts — its marriage of creativity, fashion and entertainment remaining second to none — the brand's first ever swim special was a welcome addition to the marketing line up. In case you missed it, here are six reasons why the swim special was so worth it.

1. We Saw Russel James At Work

Russell James has been the main king amongst queens as Victoria's Secret's go-to photographer for the better part of two decades. While his unmatched talent and creativity are to thank, so is the rapport he has built with the girls. Sure, most might think that photographing half naked models is the dream job, and it just might be, but it isn't a job for just any Instagram amateur. It has been noted on many occasions, both by the Angels themselves and other team members on set, that the reason James is able to get sultry, sexy, compelling shots again and again is because his subjects have an unwavering trust in him and feel at ease, no matter the situation, when he is behind the camera. James is a true artist and the swim special showcases him in the environment he has become known for.

2. We Remembered That Girl Power Runs The World

Who runs the world? Girls! The Victoria's Secret swim catalogue boasts one of the largest fashion photo shoots in the entire world, all centered around a handful of the most talented women in the business so, #girlpower. Not to mention, the Angels all seem to have a real life bond. In the midst of competing for the cover while on camera, an honor said to be as high as opening the runway show, off camera they are playing cheesy games of volleyball, hanging out in hammocks, taking selfies, dancing the night away and participating in bonfire silliness with their co-workers who have become their besties. The fashion industry can be pretty cut throat so, it wouldn't be unheard of for these ladies to be battling it out behind the scenes. Instead, they support each other on their way to the collective top, which is a recipe for total girl domination.

3. We Considered Glamour Vs. Grit

Traveling to exotic places and having your photo taken on beautiful beaches after the professionals give you a natural glow and beachy waves is pretty much the definition of "dream job." And while you won't hear any of the Angels complaining, the behind the scenes special does uncover the dedication that this group of women have to their careers and executing the perfect shot. The bikini-clad ladies lie on rough boulders with steep slopes, hike up mountains to reach waterfalls, jump off cliffs into the ocean, brave the elements and dive into caves where the waves are crashing against them. All this, plus consistent 5 a.m. hair and makeup calls for millions of moments in front of the camera each year. Now, I am not saying their job isn't without perks, but the swim special also gives credit where credit is due and makes us all respect a day on set and the commitment it takes to get the perfect photograph a little more.

4. We Found Out That NO ONE Wakes Up Like This

Just like no one wakes up looking like Beyoncé, no one shows up to the beach, takes off their cover up and naturally looks like Candice Swanepeol, including Candice Swanepoel. In one pre-shoot shot, Angel Candice is spouting South African-accented banter from behind a make shift dressing room, because she is getting "booty makeup." That's right, people, the makeup crew is touching up her butt, because even models have "flaws." In numerous takes, you can also see the girl's hair being teased and their skin being greased, so what I am saying is, it takes a village to raise a model. The final product is the culmination of a large team of individuals all working towards catalogue perfection and Victoria's Secret isn't even hiding it. Like Lily Aldridge said, "We're shooting with the best photographers, best hair and makeup, best swimsuits." At the end of the day, all of the women are gorgeous, but they aren't perfect specimens — a good message for the rest of the female population in regards to realistic beauty and body expectations.

5. We Felt That Strong Is Sexy

While VS may have a long way to go in terms of body diversity and size acceptance, the swim special promoted physical fitness and the idea that the best beach look is all about being comfortable and confident. During a beach yoga session, Swanepoel also touched on the fact that she doesn't starve herself, but rather working out and eating healthy have become a large part of her lifestyle in order to maintain her fitness level. In addition, there were multiple moments and messages that supported Victoria's Secret Sport's motto that strong is the new sexy. So, while the diversity in model size remains the same, we can all applaud the promotion of an active lifestyle and healthy eating.

6. We Encountered Raw And Real Personalities

Leading up to the VS Fashion Show there are endless model interviews and behind the scene sneak peeks. However, the swim special seemed more intimate and relaxed, allowing the models to really show their personalities to the viewers. Throughout the hour, we are shown Behati Prinsloo's love of photography and the similarities and differences between her "Boho Behati" model identity and her IRL identity; Candice Swanepoel explains how she totally transforms into a vixen under the right circumstances, but how her fun-loving self critiques her work in the third person because the woman in the photograph doesn't really feel like her; and we learn that, not only is Elsa Hosk a bombshell blonde with piercing eyes, but also a former professional basketball player. All in all, the models rarely take themselves as seriously off camera as they do when they are in front of the lens and each of them is so much more than a pretty face. Supermodels are people, too!

With the beach as their runway and ocean waters instead of wings, the Angels showed off the 2015 VS swimwear collection in stunning, fun-loving fashion. The only problem? This current cold front plaguing most of the country is not conducive to the long list of bikini's we are now lusting after. Seriously, Mother Nature, cut us some slack.