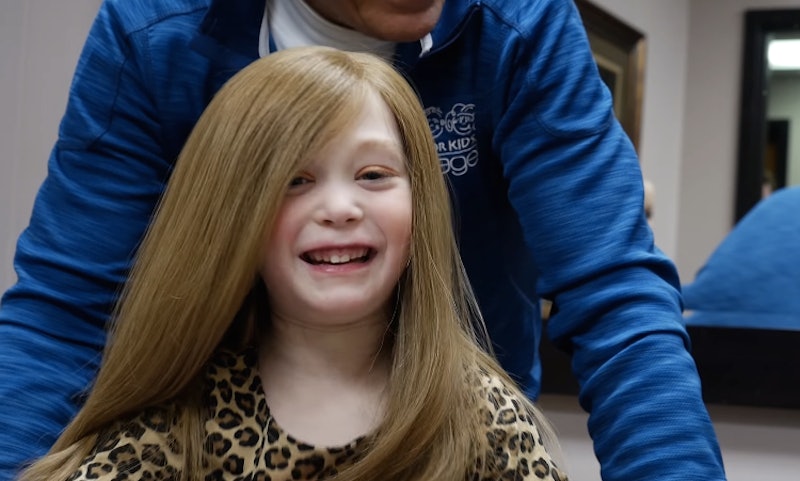 A little girl with alopecia—an autoimmune disease that causes hair loss—gets a new wig made from donated hair in a video that might win the internet for the day. We've all probably heard of people who cut of their long locks to "donate", but how many of us really knows what that process involves, or what happens to the hair on its journey from one head to another? Buzzfeed talked to people at both ends of the hair donation process as part of the Wigs for Kids organization. In the video, one woman, Hannah, donates 12 inches of her hair (and looks pretty cute with a new bob afterward, tbh), and little Bridget gets a fabulous new wig that makes her look even more adorable. Wigs for Kids is a non profit founded in 1981 which, as the name would imply, aims to help children who are suffering from hair loss by hooking them up with beautiful wigs. In other words, they're doing the actual good work.

Anyone who donates to Wigs for Kids is awesome, but sometimes cutting almost all your hair off has unfortunate, unintended results. Remember the little girl who was bullied after donating her hair to Wigs for Kids? Yeah, that happened. Jetta Fosberg was 10 when she decided to cut off her hair and donate it last year, but other kids at her school were pretty mean to her when she did, because people really are the worst. So imagine a kid who's not just cutting their hair, but losing it to cancer or some other terrible illness. You'd hope sick kids wouldn't be teased, but it's no guarantee. That was one of the reasons hairdresser Jeffrey Paul started Wigs for Kids, according to their website: His 15-year-old niece had leukemia and was devastated to lose her hair to chemotherapy treatments. Since its inception, Wigs for Kids has helped more than 100 children every year, according to its website.

The process involved in taking hair from haircut to wig, including sorting the hair (no gray!) and stitching it onto a cap shaped like the recipient's head, in all surprisingly complicated. This intricate work is done by hand, one strand at a time, according to the video. All the hair gets brushed, treated, and blended with other similarly-colored hair, so the resulting wigs look as close to natural hair as possible. It takes between 20 and 30 ponytails to make one wig.

According to Wigs for Kids, there are some guidelines to follow if you want to donate your locks: You must have a minimum 12 inches to cut off, and they can't take permed or color-treated hair. Make sure your hair is clean and dry before you send it. (Apparently, wet hair will gather mold and what kind of monster gives a child their moldy hair?)

When Bridget gets the new wig at the end of the video, she first grabs it to check it out and feel it, with a huge grin on her face. But when she has it on her head, and swishes it around and runs a brush through it, it's kind of an ALL THE FEELS moment. Just a normal little kid, with a cute head of long, glossy hair. No, YOU have something in your eye.

Oh and Jetta Fosberg? She has her own Facebook page "Stand with Jetta" where she and supporters promote anti-bullying initiatives. And she's still rockin that pixie cut.