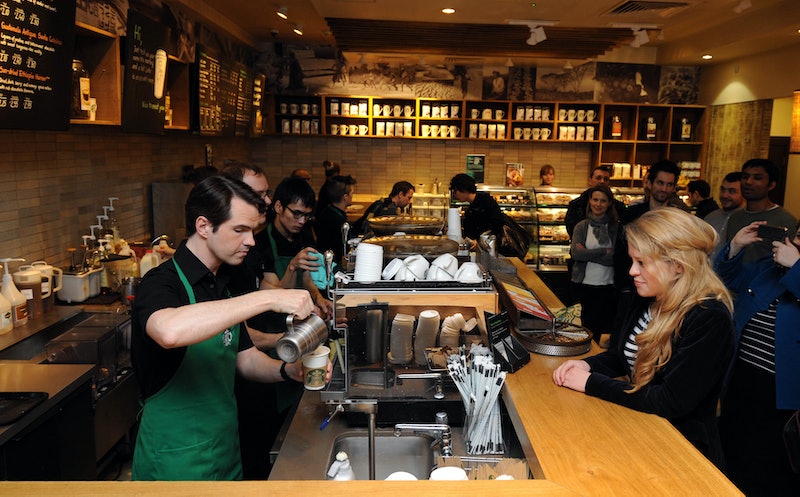 Starbucks cafes across the country are transforming themselves into political headquarters this weekend for a "Come Together" megapetition signing to protest the government shutdown. The petition — bipartisan in scope and pretty general in its demands — asks lawmakers to reopen the government, pay the nation's debts on time, and pass a long-term spending bill by the end of this year. Starbucks CEO Howard Schultz says he was concerned about everyday Americans not having a way to express their frustration on a massive scale. With 11,000 stores and an average of 200 million customers over the weekend, there's plenty of potential.

"We are witnessing a level of dysfunction and polarization in Washington, the likes of which we have not seen before," CEO Howard Schultz, in a phone interview with USA Today. "So we asked ourselves: 'What can Starbucks do, and how can we use our scale for good?"

And we ask ourselves: What's your angle, corporate mermaid?

Under Schultz's direction, the chain has been increasingly political in recent months, which is highly unusual for a large corporation — most companies seek to avoid overt political statements altogether out of fear of alienating a profitable customer base. Then again, most companies aren't Starbucks. Not to mention, the chain's been getting a lot of good press for their most recent effort.

In its 'Come Together' promotion that ends today, baristas gave a free coffee to customers who bought another customer a drink. The intent of the campaign was to foster "support and connect with one another, even as we wait for our elected officials to do the same for our country," Schultz said in a memo to staff on Tuesday. After the Navy Yard shooting, Schultz asked pro-gun organizations to stop having 'Starbucks Appreciation Days' in his stores, and politely requested that customers cease bringing firearms into his shops.

During last year's financial crisis (remember the fiscal cliff? Good times), Schultz set the groundwork for this year's enhanced 'Come Together' campaign by having his employees write the the phrase on drink cups.

In 2011, Schultz enlisted other CEOs to stop contributing to lawmakers' campaign funds until a partisan spat about the debt ceiling was resolved. In an unforeseen effect — but one that sent a message to Washington — the country's credit rating was downgraded.

Schultz says he has no desire to make Starbucks into a "national hub to take on cultural issues," but adds that he has a responsibility to the community. By treading bipartisan waters (well, except for the whole gun thing, which pissed off a lot of NRA folks), the company can appear socially-conscious and connected to the community. Think of it as tapping into collective frustrations and giving customers a place to vent(i). Even if the petitions don't do much ("Here is a list of all the people who are — newsflash — angry at you, good Congressmen"), Starbucks still gets an image boost — and lots of press. Damn-it, they got us again.

Besides sending the signatures on to Washington, D.C., Schultz also plans on sharing the results of the petition with business leaders. He's spoken to around 15 of the nation's top CEOs, and he says there's a unanimous agreement "about concern and need for the American people to be heard."