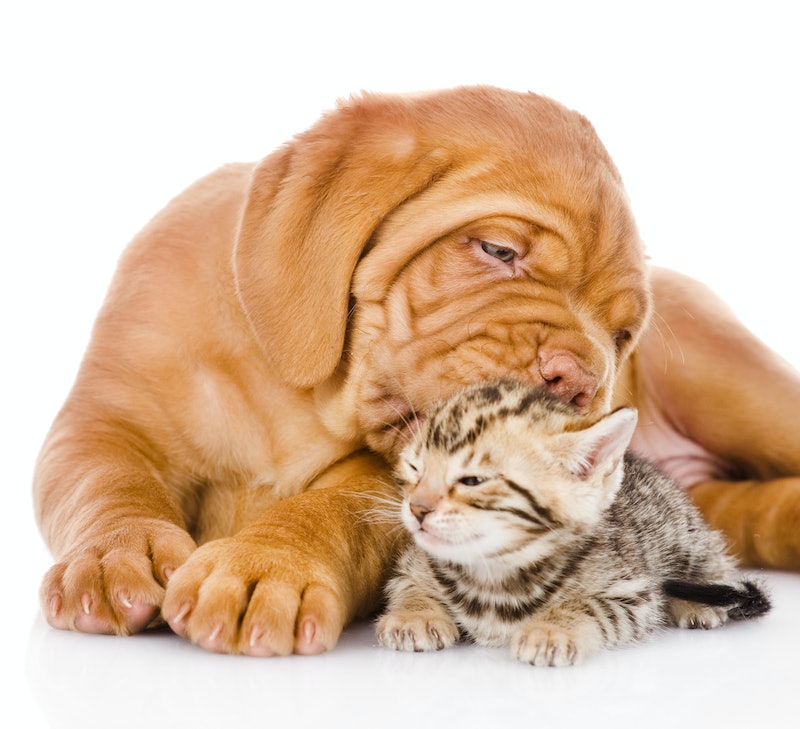 Unlike celebrity cat and dog duos like Ren and Stimpy or Milo and Otis, felines and canines don't always make a great team — hence the saying: "fighting like cats and dogs." However, a cute new Buzzfeed video on the art of romance starring cats and dogs shows just how similar these interspecies couples are to human couples, with their complex, playful and sometimes combative relationships. Don't worry though, I'm not about to get all misandrist and say women are cats since men are dogs, because clearly you're a dog or cat person based on personality, not gender.

Studies have shown that if you're a cat person, you're more likely to be introverted, creative, liberal thinking, and maybe even a bit neurotic. Conversely, a dog person is more likely to be outgoing and social, goal-oriented, and conservative in their beliefs. Put them together and opposites attract! (Or something like that...)

My cat — who once lived with a dog and barely lived to tell the "tail" — is a bit jaded re: canine relationships. If he would just sit still long enough to watch this video, however, he would see that cats and dogs undergo the same stages of courtship that humans do, which can, in many cases, lead to a lifetime of love.

Playing Hard To Get

The start of any relationship is a game of cat and mouse. Or, um, cat and dog. Sometimes you're just not ready to give up the chase, and, sometimes, if you're the one being pursued, making your crush work for it makes the payoff even more pleasurable.

When you're really stoked about a new romantic prospect, it can be scary to give in to their advances. What if you do, and then get rejected? If you let yourself get too in your own head, you might even catch yourself running in the opposite direction when your nerves get the better of you.

Begging For Their Attention

Once you realize you might actually want a relationship, you might have to do a little begging. A tiny bit of supplication never hurt anybody, just give out just enough to let them know you're in it to win it.

Showing Interest In Their Hobbies

Let the honeymoon period begin. You've decided to give it a chance, so the hard part is over right? Well, not exactly. You still have to deal with all their hobbies and interests — however strange or boring they might be.

Knocking Them Off Their Feet

In the animal kingdom, this stage of courtship is pretty literal. Come to think of it, being off your feet in the human world also means something fun is happening too...

Living Happily Ever After

Ah, the final act of romance: setting aside your differences and uniting in love. If cats and dogs can do it, anybody can.