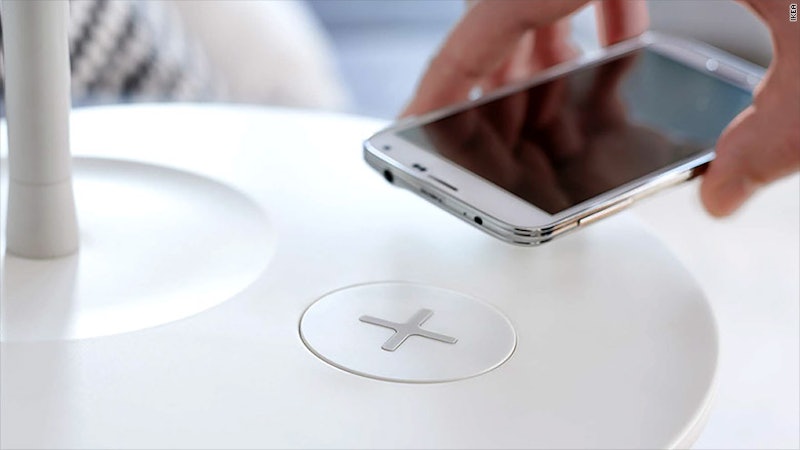 In case you needed more proof that we truly live in an astonishing time (at least as far as technology goes), here's something intriguing to pep up your Monday morning: Swedish furniture retailer IKEA and the Wireless Power Consortium have teamed up on a line of IKEA furniture with built-in wireless chargers. You heard me: Your furniture will soon be capable of charger your smartphones, tablets, and other Qi-enabled devices. I've said it before and I'll probably say it again, but you guys? The future is totally now.

According to a press release issued on March 1, the line will include a range of bedside tables, lamps, and desks, all with the ability to charge your gadgets and gizmos all by themselves. Each item will come with a charging station marked with an X; all you'll need to do is to place your device on that X, and voila! Wireless charging. Said Wireless Power Consortium chairman Menno Treffers, “IKEA is delivering on its vision of making life at home better with this innovative, stylish, and useful new collection that show[s] consumers the beauty and simplicity of wireless charging.” Added Bjorn Block, IKEA's Range Manager for Lighting and Wireless Charging, “Our belief is that mobile phones are vital parts to people's lives at home and their desire to stay connected, and Qi addresses an unmet need to keep devices powered.” Sounds like a match made in heaven, no? The furniture is expected to roll out in Europe and North America in April, with global availability arriving shortly thereafter.

For the curious, the Wireless Power Consortium's Qi (pronounced “chee,” as frequent players of Words With Friends no doubt already know) is one of three global wireless charging standards out there in the world; it enables devices compatible with its system to charge over distances of up to four centimeters, or 1.6 inches. Qi is currently locked in a Hunger Games-esque battle with the other two standards, Power Matters Alliance (PMA) and the Alliance for Wireless Power (A4WP), with the victor ultimately hoping to emerge as the global wireless standard. Why is it important that we do eventually arrive at one standard, as opposed to three? Because not all devices charge according to the same standard. As the Wall Street Journal points out, “having devices that only charge on certain surfaces could limit peoples' choice, and defeat the purpose.” If one standard were to “gain critical mass,” however, it could be the breakthrough it needs to become the top global standard — which is what the IKEA collaboration could be for Qi. PMA and A4WP also announced back in January that they would be merging, though, so it looks like the jury is still out on who the frontrunner might be.

Whichever system ultimately takes the top slot, though, it's worth bearing in mind that wireless charging isn't fabulous for your devices' battery life. As Gizmodo notes, wireless charging generates a little too much heat; this, in turn, has a nasty habit of killing lithium-ion batteries if you charge them that way too often. As such, you may not want to replace your wired chargers with your fancy-schmancy wireless charging furniture entirely — or at least, not just yet. Technology is changing all the time, though, so maybe one day soon, someone will solve the excess heat problem. Wouldn't that be a sight to see?