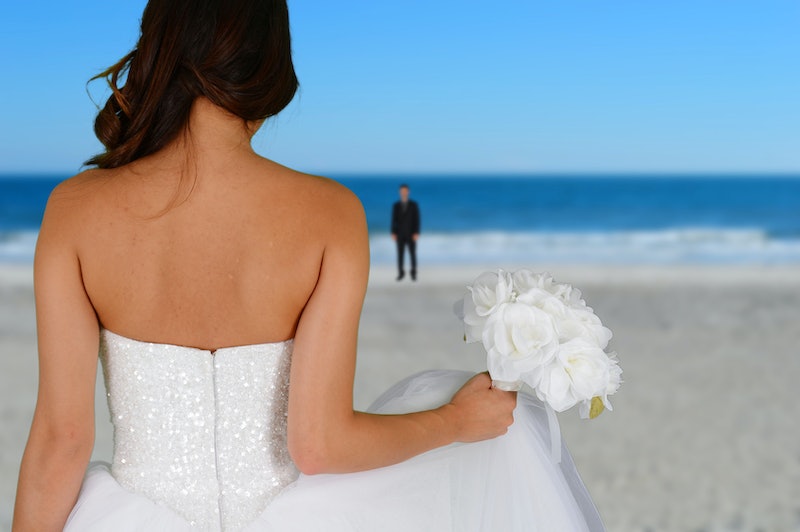 As an avid fan of Say Yes To The Dress (and all its variations), Four Weddings, and other wedding shows, I love a good wedding story (but like, not in a crazy way...OK, maybe in a crazy way). So when I heard that a Utah bride-to-be had her wedding dress paid for in full by an anonymous stranger, my heart just about melted. Sure, you've heard stories about people paying it forward at Starbucks, but a wedding dress? Those things do not come cheap! That is some serious generosity right there. I almost can't handle the kindness.

So here's what happened: last Friday, a woman named Liz Jensen went to a bridal store to look at wedding dresses. Maybe she didn't want to bring an opinionated "entourage," maybe she was just looking around, or maybe I watch too many wedding shows, but for whatever reason, she went by herself. But then, an unexpected thing happened: she found the dress! She told ABC news that right when she put it on she said, "OK. This is the one." She knew she wouldn't let this dress be "the one that got away," so she went up to the counter to pay for it.

When she tried to pay for the dress, the store owner informed Jensen that it had already been taken care of by a mystery shopper who chose to remain anonymous. The store's owner said this random act of kindness was probably planned from the get-go. The woman came in, tried on a few dresses, and when the owner asked if she liked anything she tried on, she replied, "Actually, I'd like to pay for one of their gowns." Then, she decided on Liz, presumably because she noticed she hadn't come into the store with anyone else. The mystery benefactor paid the $465 for the dress and left, and that was basically the end of it.

Since they were so touched by this woman's kindness and generosity, the Jensens announced they plan to encourage guests to pay it forward at their wedding. Liz Jensen said, "We want to have the news clips of our wedding dress story and set up a table where guests will pledge to be kind and do a service for someone else."

If that didn't give you the warm and fuzzies, I don't know what will. I hope the Jenses have a very long and happy marriage, and the anonymous woman, whoever you are, wherever you are, keep being an amazing human. The world needs more of you.

If you have a heart and this story inspired you to do a good deed, you're in luck. I've gathered a few easy (and not $400) ways you can brighten someone else's day.

I can take a guess as to why the Starbucks pay it forward chain did so well: because coffee is your life's blood. I'm only half kidding about that. But seriously, think about it: you roll up to your local coffee shop, hating the world and everyone in it. But then you're informed that some thoughtful stranger has paid for your caffeine fix, and suddenly, the world is pretty great. Not only will you turn someone's day from Slump-day into Humanity-Is-Actually-Pretty-Great-day, but giving back also makes you feel good, so it's a win-win.

2. Give a stranger a compliment

Sure, it's nice when people you know give you compliments (because a compliment is a compliment), but how good does it make you feel when someone you've never met stops to tell you you're having a great hair day, or that your outfit is on point? It's like, "Aw, shucks. Me? Oh, stop it you."

3. If you find something that's not yours, give it in to a lost and found

Let's say you're at the gym and see someone left their wallet on the treadmill. Don't just be like, "Well, that's not my problem." Give it in to the front desk! Seriously, how would you feel if in a moment of spaciness you left your phone somewhere, and when you went back to get it, it was nowhere to be found? Awful is the correct answer. So don't be that guy who just doesn't get involved. Make the world a better place, one lost iPhone at a time.

More like this
The 8 Best Strapless Bras For A Wedding Dress, According To An Expert
By Alexa Vazquez
The 5 Best Crystals To Wear Every Day, According To An Expert
By Maria Cassano
20 Smart Devices Under $35 That’ll Change The Entire Vibe Of Your Home
By Emma Carey
Bustle Newsletter: September 23, 2022
By Stephanie Talmadge
Get Even More From Bustle — Sign Up For The Newsletter