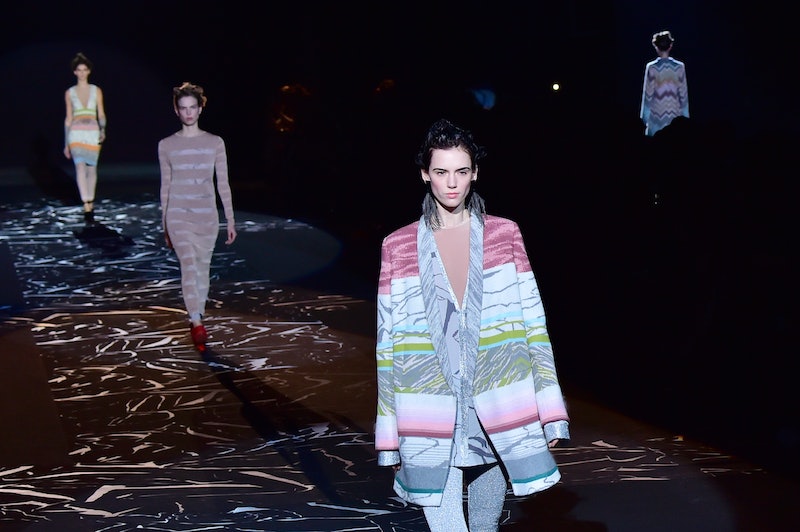 Milan Fashion Week has come to a close, and with it the end of what the industry deems "Fashion Month." It is fitting for Milan's eccentric runways and street style to close the sartorial extravaganza, as Italy does haute idiosyncrasy like no one else. New York Fashion Week may be edgy to a fault while London provides its signature, glamorous quirk, but Milan pushes the boundaries of design in ways that challenge even the most adventurous of dressers.

For Fall 2015, Milan's designers and doyennes issued audiences a number of fashion imperatives for the coming season. Designers demanded their devotees to leave preconceived notions of autumn dressing behind in favor of fresh florals and crisp cream ensembles, and to embrace rebellious trends such as bondage accents and leather wholeheartedly. In additional, attendees were thrown for a loop when the shoe game suddenly became about idiosyncrasy instead of streamlined beauty, and the backstage beauty itself was less beatific than oddly sensational. However, no matter how nonchalant audiences were in response to the parade of challenging looks storming the runways, there were some that simply defied logic. Read on for 20 questions Milan Fashion Week left us with, and consider yourself a sartorial prodigy if you have the answers.

1. Am I expected to make fur slippers out of the trimmings from my next haircut? Because the fuzzy footwear at Gucci appears to indicate the affirmative.

2. Is it OK to be concerned for the fate of fashion when furry feet are suddenly in vogue? One would think the world had regressed to the Stone Age.

3. Will Jeremy Scott ever design anything that a non-fashion blogger could wear to, say, work? I love baseball jerseys as much as the next girl, but I doubt many supervisors would feel the same if someone sauntered into the office sporting one with Porky Pig embroidered at mid-thigh.

4. On the subject of Jeremy Scott's Moschino collection, am I the only one who immediately thought "Space Jam Goes Couture"?

5. Is the pantsuit back? And if so, can I channel Prada and only wear a version rendered in pastel pink or blue herringbone? Otherwise, I'm not interested.

6. The arm warmers and zebra-print leggings at Missoni were terrifying, no? I felt as though I'd taken a trip down memory lane of the most nauseating trends of the '80s.

7. Speaking of the signature knits at Missoni, did a sewing machine explode in producing several of the optical patterns? I love the design house's patterns under normal circumstances, but there were some incredibly trippy designs sauntering down the runway.

8. Are the hemlines getting shorter, or is it my imagination? I blame Hannah Davis's oh-so-charming Sports Illustrated cover. Who needs clothing, anyway?

9. Did Trussardi mean to cause a leather overdose? I may have to attend rehab or undergo a leather detox to recover from the sheer volume of the material.

10. Is 11 runway looks a new record for Fashion Week? Piazza Sempione's minimal number of looks caused viewers to cautiously ask, "Is that all?"

11. Did someone put an Earlybird Instagram filter on the Etro runway? I saw the entire collection through sepia-toned glasses.

12. Did all of the footwear at Antonio Marras look like clown shoes to anyone else? I had some difficulty concentrating on the clothing with the enormous clodhoppers lumbering down the runway.

13. Does Roberto Cavalli have a neck-related aversion? From turtlenecks to ties and bows, the designer had most models clothed to the chin.

14. Are bare breasts the next big trend? I'm actually asking, because there were so many on the Gucci runway.

15. Is the brilliant Giorgio Armani dipping into hallucinogens while designing his collections? If so, the experimentation is truly working for him.

16. How does one become a designer muse? After viewing Anna Molinari's sparkling, floral, tweed-infused collection for Blugirl, I have decided there is no higher sartorial calling than immersing myself in the brand.

17. Was that a hat I saw on the runway at Roccobarocco? I'm torn between labeling the accessory a headpiece and an overgrowth of fur.

19. Did the models at Versace have to sport sunglasses so they wouldn't be blinded by their own ensembles?

20. Can the fashion industry give crop tops a rest for Fall 2015? I'm talking to you, Philipp Plein. The looks on Plein's leather-laden runway were beautifully avant-garde, but my abs aren't ready to see the light of day.