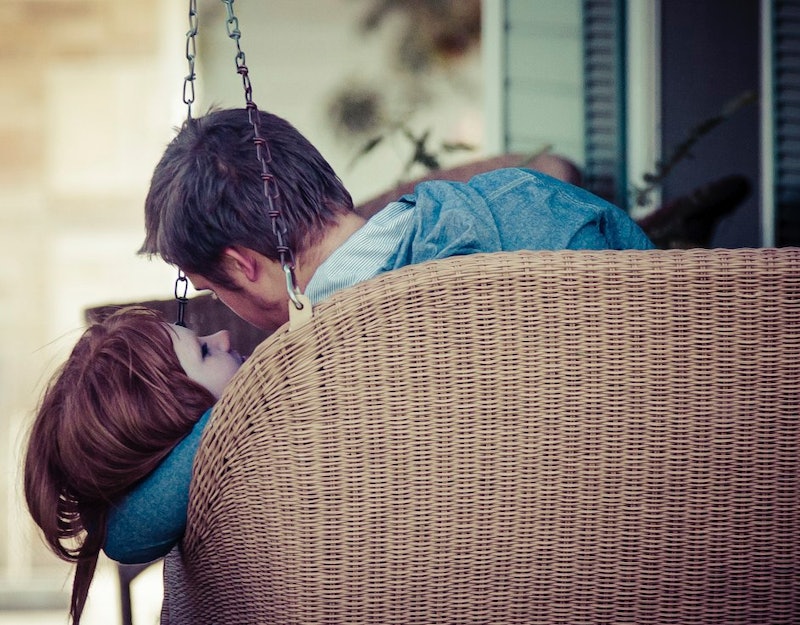 "I'm not ready for commitment," is something I've heard every single person I know say at some point in their dating career. Things like, "I'm just happy doing me right now," and "I just don't want to compromise my me time, you know," go hand-in-hand with commitment phobia. When I was single, I trotted out the "Commitment? ARGH!" card more than I'm proud to admit, because I deep down I always knew citing fear of commitment as an excuse for not being in a relationship just meant I hadn't met anyone I wanted to be committed to yet. And so it goes with everyone I know whose ever said they're "afraid of commitment" (and potentially everyone in history): When the right person comes along, we're prepared to move mountains to be with them. Your fear of commitment might be real, but for most people, accusations of fear come unfairly from friends and relatives when, the truth is, most of us aren't afraid of anything—we just haven't met the right person yet.

When you fall in love, you're not going to let a little thing like fear of commitment get in the way of you being with your person, once you meet them. In fact, that's what happens when you fall in love: You do it entirely in spite of every fear and apprehension you have because facing your fears head on or ignoring them suddenly seems so worth it. Here are six ways you can tell it's not fear commitment that's holding you back from a relationship, it's just that you haven't met the right person yet:

1. Your primary excuse when avoiding dating/people you're dating is: "I don't have time."

"I don't have time" is not an excuse. Did you not just binge watch all of Season 3 of House of Cards this weekend? Haven't you spent at least an hour of your day picking at in grown hairs? Are you not constantly seeing friends, going to shows, and enjoying the culture of wherever it is that you live? You have time. You have lots of time. You just don't want to allocate any of that time to any of your romantic prospects, which means not that you're afraid to give away your precious "me" time, you just haven't met anyone worth giving it away to.

2. You're perfectly fine at committing to other things

You have a job, a windowsill herb garden, close friends, regular exercise, a book club, possibly a pet, so commitment is not your problem. You're committed to a lot of things. But again, all those things are things you've deemed worthy of committing to. Committing to love someone is no different. You have to deem them worthy.

3. You're half-hearted about your romantic prospects

If your romantic prospect/s have you feeling lukewarm, and you're making excuses to avoid them, canceling plans, and generally not very excited when it comes to actually hanging out, it doesn't mean that you're "afraid to commit", it means the person/people you're seeing aren't right for you. There's nothing wrong with that. "Not being super excited about someone" doesn't need to be attributed to fear of any kind. You're not AFRAID to be with them. You just don't WANT to. It's fine.

A sure sign that you're not actually afraid of commitment but rather, just haven't found the right person, is that you're actively and enthusiastically dating. That's a tacit acknowledgment that you're looking for that right person, and that when you do, you will commit. If you genuinely don't want a relationship or to meet someone you really like, then what would be the point of dating at all?

It's not so much that you're actively rejecting the idea of commitment, it's that you're passively accepting that you're currently not committed to someone in particular. You can claim it's because you're allergic to commitment as much as you like, but we all know that when the right opportunity arises, you'll be on the relationship bandwagon faster than you can say, "You got it bad."

6. You're not the type of person who will settle for "just okay"

Some people are happy to get into relationships and commitments that they're only half-assed about. Some people hate the idea of being alone so much they'll be in a relationship, ANY relationship, just for the sake of being in one. But then there are people who are the opposite: Who would prefer to be alone than to be in a relationship that wasn't quite right just because they can. Anyone can settle. But not wanting to settle doesn't make you afraid of commitment, it just means you need something very specific to make you happy, and when you find it, you'll know.