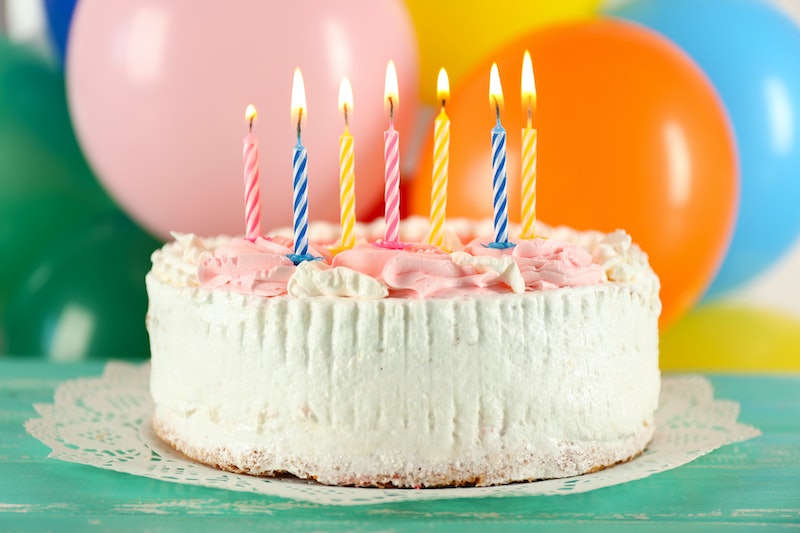 When you spend as much time on the Internet as I do, you learn at least one new and somewhat bizarre thing every day. Today, for example, I learned that birthday cake-flavored wine exists — and it kind of made my head implode a little bit. I don't have any qualms about other things flavored like wine (wine ice cream, for example)... but wine flavored like other things? I don't totally know what to do with that idea. On the one hand, I don't think that good wine needs to taste like anything other than what it is; what the wine tastes like, I would argue, is the whole point of drinking it in the first place. At the same time, though… well, I mean, birthday cake wine. I had a similar reaction when Cupcake Vodka became a thing, except that this one seems both weirder and more fascinating to me.

According to its website, Birthday Cake Vineyards is the creation of Raphael Yakoby, formerly of Hpnotiq and Nuvo, and David Kanbar, who had a hand in both Skyy Vodka and Skinnygirl. The idea was to create a “unique and elevated wine experience”; by “elevated,” Yakoby and Kanbar mean taking certain qualities experts often use to describe wines — hints of cinnamon, chocolate, cherry, and so on — and using the decadence of cake flavors to kick them up even more. Since it was important to them that the drinks not be overly sweet, it took them about two years working with a blender “just as crazy” as they were (their words, not mine) to develop the wines. I haven't tasted them myself, so I can't say whether they succeeded; they seem to be pleased with the results, though, so do with that what you will. For the curious, it looks like this:

Birthday Cake Vineyard's implausible yet totally real beverages come in five varieties: Strawberry Shortcake, Black Forest Cake, Cheesecake, Coffee Cake, and Cake Batter. Each promises to meld the flavors of the sweet from which it draws its name with either white or red wine; Strawberry Shortcake, Cheesecake, and Cake Batter are all whites, while Black Forest Cake and — somewhat unexpectedly, I find — Coffee Cake are both reds. All of them, by the way, are meant to be served chilled, so if you don't like your red wine cold, you might want to pass on the Black Forest and Coffee Cake flavors.

Although the Birthday Cake Vineyards website notes that they can be consumed at any time, either with or without food, I'll admit that I'm not totally sure what to pair them with. I've got some ideas, though; anyone want to volunteer to try them out?

1. Strawberry Shortcake with Cheese and Crackers

Specifically soft, white cheeses with mild yet notable flavors. I would imagine pairing something strong like gorgonzola with it would be a little too much; best to stick to things like goat cheese and maybe a sharp white cheddar. If you wanted to go really nuts, you could make yourself a gourmet grilled cheese and have a glass of Strawberry Shortcake alongside it.

Deep, rich meal; deep, rich wine. If you wanted to stick with dessert, though, I'd probably pair Black Forest Cake with some 70 percent dark chocolate. Simple, yet effective.

I'd go with a bowl full of berries myself, but I'm sure it'd be great with a wide variety of other tasty fruits, too. Peaches, anyway?

A cinnamon-y red wine seems like it should go with something spicy. I still think it's a little odd, by the way, that the Coffee Cake flavor is a red, rather than a white; if it did come in a white variety, I'd probably pair it with apple pie.

5. Cake Batter And… Nothing

This one? I Kind of suspect it should be enjoyed on its own, pure and unadulterated. Maybe I'm wrong, though. Thoughts?

Find out where you can buy Birthday Cake Vineyards' wine over at its website.