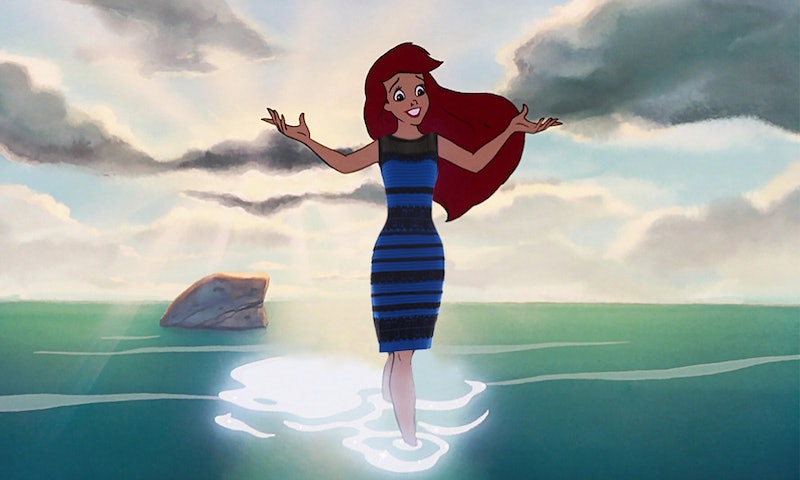 By now you're probably sick about hearing about The Dress and are just waiting until the Internet moves onto something else so you and your friends can stop feuding over whether it's blue and black or white and gold, right? Well you're just going to have to wait a little bit longer because illustrator Lauren Ahn combined the Internet's two favorite things and drew Disney princesses wearing The Dress for Cosmopolitan. So it's safe to say we'll get to argue over who's right for at least another day or two, because if there's one thing everyone on the Internet can agree on, it's that we love when people modify pictures of Disney princesses.

Ahn took eight of our favorite princesses and drew them into #TheDress, in both the blue/black and white/gold combos, and I must say, they look really authentic. Although, you can tell from the pictures — which we'll get to in a minute — that Ahn is on team Blue & Black because something's a little off in her white and gold illustrations. I'm not going to tell you what; I'll leave it to you eagle eyes to figure out for yourselves.

Now let's just all agree that after we get a kick out of these photos, we'll stop talking about The Dress for good. Seriously, I've tried every way imaginable to see white and gold — squinting, looking from afar, on different computer screens, you name it — and all I can see are blue and black. It's seriously haunting me.

Above we have Ariel and, without further ado, here are some more of the princesses:

Notice how The Dress looks totally natural on Tiana:

The Dress fits in so well, you almost forget that this isn't the original dress in the movie.

Now here's Cinderella in the white and gold:

PSSST! Notice anything wrong with this? No? OK, I'll tell you: the white and gold panels on the dress are reversed! The lacey part should be gold and the in-between part is white. At least, that's what I'm told, since I haven't been able to see it for myself.

Did I miss your favorite Disney leading lady? No worries, head over to Cosmo to see the full lineup.

More like this
Trevor Noah Hilariously Clapped Back At Racist Attacks On ‘The Little Mermaid’
By Brad Witter
Halle Berry’s Response To A ‘Little Mermaid’ Mix-Up On Twitter Is Hilarious
By Stephanie Topacio Long
12 Easy Halloween Costumes You Can Wear With A Denim Jacket
By Kirsten Nunez and Bustle Editors
The 5 Best Sheets For Your Purple Mattress, According To Reviewers & The Brand
By Vanessa Spilios
Get Even More From Bustle — Sign Up For The Newsletter