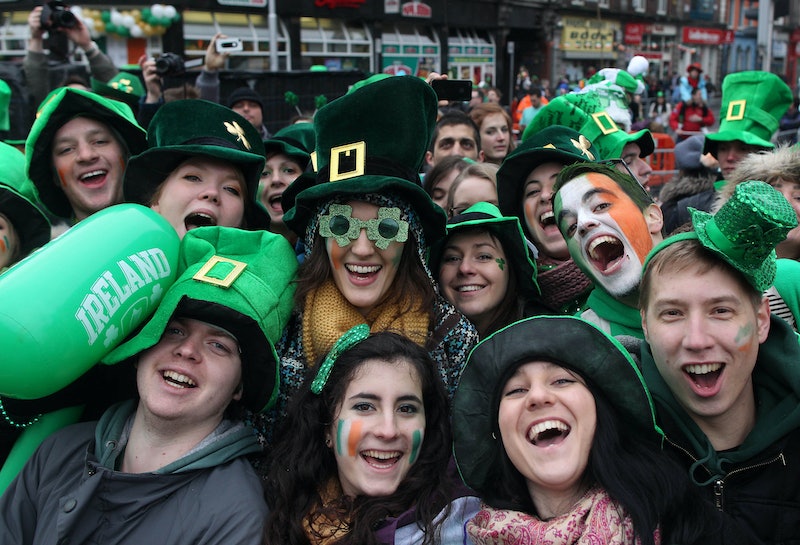 March 17 marks the day Irish descendants — and everyone else, for that matter — celebrate all that good old St. Patrick represents. Well, we do this subconsciously, I’m sure, when we drink green beer, wear tall leprechaun hats, belligerently yell the official slogan of the parade (“Kiss me, I’m Irish!”), and pinch each other for not donning an obvious shade of shamrock green. St. Patrick's Day celebrations are great no matter where you are, but there are also certain cities with St. Patrick's Day celebrations that are on an entirely different level. Seriously, when it comes to all things green, these places have the rest of the country beat.

Outside of Ireland, the U.S. has some of the biggest public parties from the West Coast to the East — which is why we’re counting down the top cities to celebrate St. Patrick’s Day, according to the following criteria. OK, there’s actually just one requirement... the cities must have a serious cult following when it comes to celebrating all things green on March 17. That means, big or small, wild or more family-oriented, it doesn’t matter, as long as there is a die-hard fan-base out there.

Now, let’s start the countdown for the best cities who know how to paint the town green.

Yes, even Tennessee has leprechauns. Each year, the small town of Erin, Tennessee (approximately 1 hour and 20 minutes west from Nashville, which is one of many gems in the South) hosts the Irish Day Celebration with parades, leprechauns, pageants, arts and crafts, and carnival rides. It's one of the largest St. Patrick's Day celebrations south of Chicago.

Colorado Springs is a great place to bring out the green this St. Paddy’s Day. As the home of a handful of authentic Irish bars and restaurants, this city is always packed with fun, food, and celebration. While there are events all weekend long, the city's parade is the real show-stopper. More than 30,000 cheering revelers — young and old — line the streets as the parade winds through the heart of downtown to the sounds of bagpipes.

Downtown Roanoke holds the annual McDonald's St. Patrick's Day Parade on the weekend before St. Pat's, and then hosts the Shamrock Festival and Corned Beef and Co.'s Celtic Celebration. This event brings in more than 25,000 attendees and has continued growing each year. The parade consists of more than 100 entries, including community groups, businesses, non-profit organizations, and floats.

Mugs of green beer practically flood The Valley here. When visiting Phoenix, you can expect corned beef and cabbage galore. What else would you expect during the city's Saint Patrick’s Day Parade and Faire, which features an array of Irish performance art? We're talking Irish step dancers, bagpipers, and local marching bands. But the highlight is definitely the concerts to follow where food and drinks are available, Celtic rock bands take the stage, and kids keep busy with a petting zoo (something even adults can't resist), face-painting stations, and horse riding.

This year was the 20th annual Bud Light shamROCK 2015, presented by Jameson and The Field, which brings Ireland all the way across the pond to SD. There are typically 20,000 festival attendees rallying for a long list of live entertainment at The Field Irish Pub stage with Irish Rock, Irish Punk Rock, and other Irish-band favorites.

The annual Greenville Ave. parade is only the start to a very large block party. The street is closed to traffic, and party-goers crowd the lanes hopping from bars to restaurants and eventually moseying on down to concerts. The Dallas Observer sponsors this, and after bringing in Snoop Dogg and Ludacris the last two years, they've decided to give the lime light to a local country band Josh Abbott Band this year. On March 17, the Texas darling, Pat Green, will play as a homecoming finale.

This location's celebration is said to be the most stylish (hmm... I have a feeling most New Yorkers would disagree, but still). It's earned its quirky reputation dating back to its first parade back in 1852. What sets the path as the parade's route? The trolley tracks, of course!

Afterwards, SF-dwellers lead a bar crawl leaving no beer unfinished, so we should probably add the adjective "productive" in addition to stylish.

Oh hey, New York! The NYC St. Patrick’s Day parade dates back to 1762, and is the oldest and largest celebration (drunk fest?) of any other Luck-of-the-Irish function in the country. It starts on March 17, and is basically a non-stop party for anyone lining the street.

Though the NYC jig is bigger, it doesn't mean that Boston doesn't do it better. Known for its long-standing Irish heritage, Bostonians begin partying a full week before St. Patrick’s Day. In fact, 850,000 people have been known to invade the area, which boasts festivities like the Gaelic Gourmet Gala, tons of Irish band concerts, and of course its infamous parade.

Boston’s South Boston neighborhood, known as Southie, is the rowdiest party (and we mean that in a good way), with the parade beginning at Broadway Station.

No other U.S. city does St. Paddy's Day like “Second City.” It's been known to attract as many as 350,000 spectators. Though this figure is lower than others previously mentioned, it's the amount of love party-goers have for this particular place that matches the amount of heart the city puts into the holiday that puts Chicago in the top spot.

They dye the Chicago River emerald green, for heck's sake, a tradition that started in the 1960s. It's a multi-day event with the most action happening on Division Street. You must make a stop at Mrs. Murphy & Sons in Chicago's North Center neighborhood. It's the closest thing you'll get to being in Ireland on St Patrick's Day, as Mrs. Murphy & Sons was set up and owned by an Irish family almost 10 years ago and is built to feel like you're walking into a pub in Dublin. The restaurant even has a grocery store selling Irish produce. Cool, right?

Congrats to those whose cities made the list! Party on.

More like this
9 Tips For Hosting A Holiday Party In A Small Apartment
By Anna Davies
You Can Stay At The 'Hocus Pocus' House On Airbnb
By Alexis Morillo
Craving The Beach? Here's Your Guide To A Solo Vacation In Turks & Caicos
By Alexis Morillo
15 Holiday Bar Cart Ideas For A Tiny Apartment
By Ashley Abramson
Get Even More From Bustle — Sign Up For The Newsletter