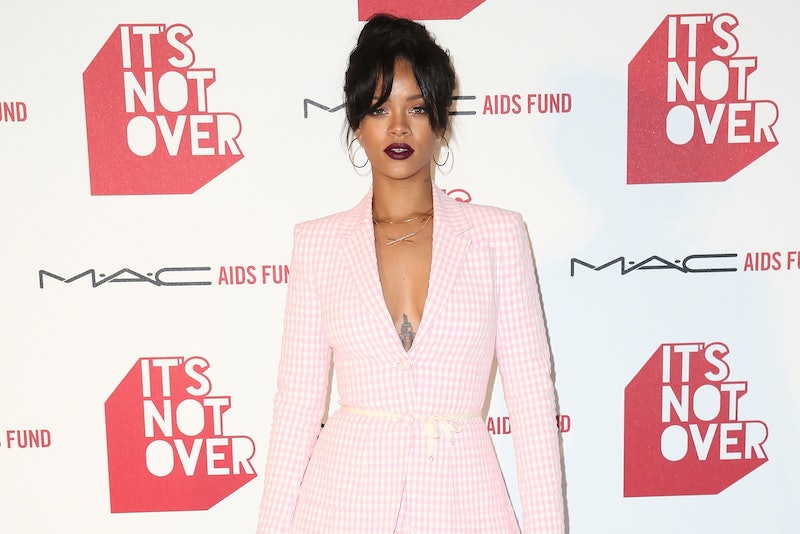 The fashion industry is flipping even the most deeply rooted sartorial traditions on their head for 2015, and the latest trend on the docket is gingham print. Gingham isn't a fabric historically associated with particularly avant-garde or boundary-breaking style. Nevertheless, designers have seized upon gingham for Spring 2015 and twisted it into something akin to daring and sexy — no small feat for a fabric often described as prim, classic, and traditional. Despite its many iterations, gingham's latest manifestation is the most enticing yet. The fabric is a sartorial chameleon, so forget everything you know about gingham and take the freshly revamped fabric for a test-drive this spring.

The 2015 version of gingham is referential towards Dorothy's sweet blue and white pinafore and Daisy Duke's knotted button down, but for spring gingham is all grown up. Gone are the extraordinarily prim blouses buttoned up to the chin and plain, pleated midi skirts paired with demure sweater sets. The new gingham is ever so slightly eccentric, and decidedly imperfect. Mussed, creased, slit, embellished, and slashed, gingham is anything but fussy this year, If you look anything like Doris Day when sporting gingham this season, you're getting the trend wrong.

Joseph Altuzarra could — and did — teach a master class on subverted gingham, crafting checkered looks so blushingly beautiful for Spring that they nearly appeared saccharine save for a slit here and a low neckline there. A slim gingham shirtdress that hit mid-calf was unbuttoned all the way to the waist as an unexpected shock of sultriness, and the designer sent models down the runway clad in the famous Altuzarra slit skirt, this time rendered in gingham.

Quintessentially American labels including Diane von Furstenberg and Michael Kors may not have heightened the idiosyncratic sensuality of their spring collections to the level of Altuzarra, but each fashioned a line of gingham looks that were more flirtatious and coquettish than traditional. In particular, Diane von Furstenberg's classic wrap dress was a standout in featherweight, curve-hugging black and white gingham. Even Oscar de la Renta chose a more provocative path for gingham, offsetting darling midi skirts with crop tops and pairing modest gingham sweaters with transparent, laser cut envelope skirts.

Across the pond, Richard Nicoll took his audience on a sartorial ride by cropping gingham suits and crafting mini silhouettes that were both ultra-modern and cheeky in style. Meanwhile, Alice Temperley chose to spike her eponymous line with menswear influences and girly gingham for spring, pairing white button down vests with slouchy cuffed gingham trousers for a decidedly unorthodox take on the trend. Thomas Maier's Spring 2015 collection for Bottega Veneta didn't lean as heavily on gingham as those of other designers, but the few looks rendered in the material were riddled with sequins, distinctly crinkled, and created with layers upon layers of delicate fabric.

Of course, a trend isn't truly a trend until it is favored by celebrity taste-makers, and thanks to the prescience of Rihanna the gingham trend has already been picked up for spring. Based upon the street style looks accompanying the Spring 2015 runways as well as RiRi's careful guidance, I would wager the trend will catch on the moment temperatures exit their current subzero freeze.

The moral of the story is this: gingham isn't just for straight-A students who appear to have walked off the set of Pleasantville anymore. 2015's gingham is interchangeable with leather or satin in its sex appeal, and has no business being paired with ho-hum pointy toe flats or chunky turtlenecks. If you're looking for your next dissident ensemble, gingham is your perfect-fit fabric whether in the form of a sporty crop top...

or a cool pair of socks peeking out of your loafers.

Bias is passe, so give your consternation a rest come April and give your closet the gift of gingham.