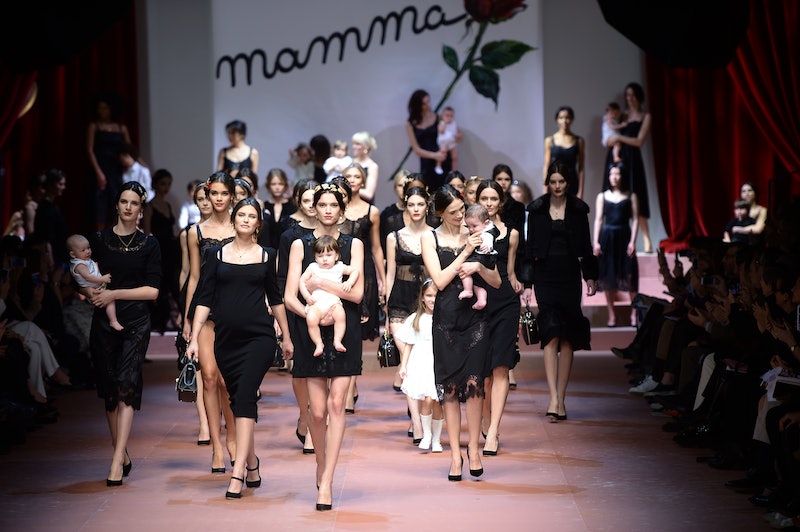 Though Fashion Week is an increasingly female-centric operation, designers often miss the point when it comes to creating presentations that are actually empowering to the fairer sex. However, Dolce & Gabbana's mother-centric Fall 2015 collection was determinedly celebratory of women and their many capabilities, most of all that of giving life to their children. Instead of perching squirming children and their nervous mothers in the front row of a couture show, the Dolce & Gabbana design duo decided to include their favorite mother figures in the presentation itself. Why metaphorically shower mothers in praise when they can take center stage and receive an entirely literally standing ovation for their often under-appreciated multitude of roles?

In addition to a number of shifts and shirts embroidered with poignant phrases including, "I love you mamma" in several different languages, Domenico Dolce and Stefano Gabbana featured a number of mother-daughter duos on the runway along with one very pregnant model. Style.com noted that the overarching red rose theme was a nod to Gabbana's close relationship to his mother, who has long harbored a devotion to rose-fragranced lipstick. Overt, it may have been, but the show filled a niche that few designers even come close to realizing. While a collection that is aesthetically pleasing is fleetingly satisfying, a collection that brings human relationships as opposed to technology or social status to the forefront is incredibly important.

Allowing women to choose the roles they wish to occupy and freedom in how they interpret each role is an integral facet of feminism, and it is in this respect that the Dolce & Gabbana show excels. Instead of simply portraying women as rebels, beauties, goths, bohemians, or BDSM devotees, Dolce & Gabbana allowed its models to be all of the above in addition to doting family members. Healthy familial relationships are always in vogue, as are women who fearlessly devote their lives to family and work, and Dolce & Gabbana perfectly encapsulated the modern woman with each of her varied components. You may just feel the need to call your mother after viewing the collection, and isn't that incitement to action exactly what a good fashion show should do?