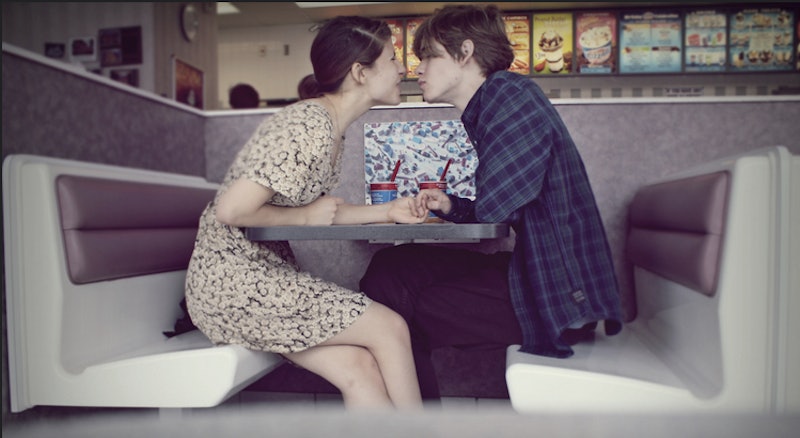 So you finally found someone you like on Hinge; you’ve been on a few dates; you're falling for them… now what? Well, it looks like you two will become an official item quite soon: According to a new study, most couples become exclusive after four weeks of dating. Not to put a timer on anything; but, well… maybe it's worth keeping in mind.

More specifically, it takes an average of six dates to become exclusive and nine to call yourselves a couple, according to a Google Consumer Study conducted by Mic. Mic found that, of the study's 3,058 participants, 45.2 percent reported dating their partner for less than a month before having the exclusivity talk; meanwhile, 28 percent said that it took them one to two months to become exclusive. They also did some calculations, and figured that after six (relativity short, non-sleepover) dates, couples had only spent around 24 hours together. Sounds fast, right? Well, that’s exactly what Mic thought. They attribute this lightning-speed exclusivity to how soon couples are becoming intimate (sleeping together after only 3.53 dates), and constantly being in communication via text.

Plus, when you think back to your dating history, I’m sure that having an exclusivity talk after six to nine dates doesn’t seem all that crazy. Personally, I know after the first thirty minutes of a first date if the person is someone I can see myself with. Furthermore, Mic points out some studies have found that falling in love can take less than a second — my standard half hour isn’t even needed! Though we aren’t given many details on the study’s participants, I would say that this type of dating behavior makes sense for those who have already graduated college and are building their adult lives. Dating after college is a much bigger commitment than dating on campus; it takes more time and effort to schedule a date and work out the logistics of seeing each other. If you aren’t that into someone, you simply won’t bother putting in the effort — it’s much easier to plan a wine-and-Netflix type night.

So: If we can make such big life choices in such a short amount of time… what would it be like if other life events happened that fast? Here are a few life experience I, for one, wish would happen in a month — or even a month boiled down to 24 hours!

Pounding the pavement is only enjoyable for so long. If only the job searching and applying would only take a month! Imagine moving to a new city and knowing that you’ll be able to find a new job quickly — I’d pack by bags for a quaint Italian village, stat.

There are few things as hellish as packing and unpacking an entire apartment. I’ll take the 24-hour option on this one, thanks!

3. Finding The Person You Want To Be Exclusive With

Being single is a lot of fun, but when we want to be coupled up, finding the right person can take forever. Only having to put in the extra effort that comes with S.O. searching for four consecutive weekends? We’ll take it.

Wouldn’t it be awesome to be fit before your 30-day trial even expires? No more gym costs!