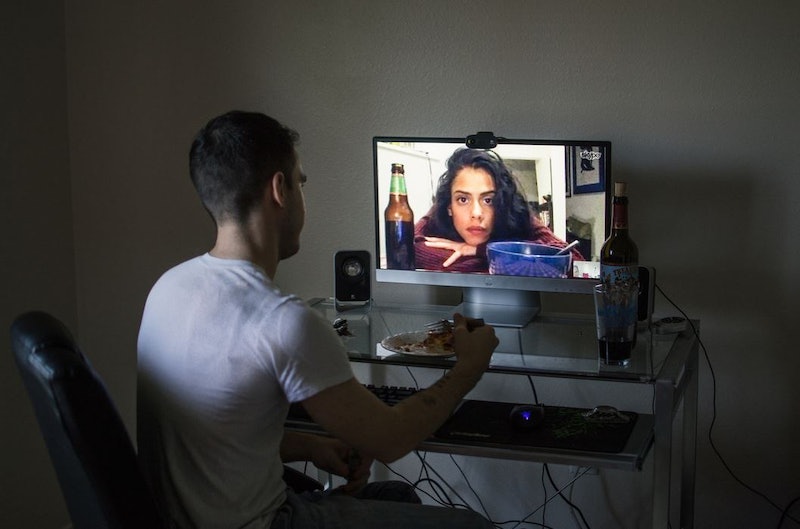 Not all relationships are meant to be — but that doesn't make it any less painful when they end, especially when the relationship in question is a long-distance one. Photographer and U.S. Navy 3rd Class Petty Officer Christopher Janaro captured the dissolution of his own long-distance relationship during his time stationed out in California; the resulting photo series, titled “The Distance,” is a powerful depiction of how a relationship can fail even when neither party is at fault. It's proof that there's no such thing as "If you really love each other, you'll find a way to make it work" — although there may be such a thing as, "If you really love someone, you'll know when to let them go."

According to Feature Shoot, the New York native and his former fiancée began dating before Janaro enlisted. They made the distance work throughout his training when he was located in Pensacola, Florida; he proposed after he became an Aviation Electronics Technician, and together they moved to Jacksonville. During these months, Janaro served on shore duty — but when he was transferred to the Naval Air Station Lemoore, they went long distance again: He in California, his fiancée in New York. They exchanged emails and text messages, scheduled video chats, and even exchanged handwritten letters in order to bridge the gap — but after three years, they were ready to call it quits.

I've never had a relationship span the same sort of distance Janaro and his fiancée's did; the most I've had to contend with is what's sometimes referred to as a “mid-distance relationship” — the type where you can get to your partner's place without hopping on a plane, but which still involves needing to bring a change of clothes with you when you go. My boyfriend and I made it work for four years before I finally moved out of the city and in with him — but even though the distance was relatively easily crossed (via three to four hours of travel and a lot of public transport) and the longest periods of time we went without seeing each other weren't usually more than a month, it was still difficult. I can only imagine how hard it must be when you're going for months at a time with 3,000 miles between you. Skype dates and emails can only do so much; even just sitting quietly in the same room as someone else makes a world of difference.

I also had the advantage of being located in the place I'd spent my entire adult life, with all of the nearby friends and loved ones that go with it. Janaro told Feature Shoot that “neither [he] nor his significant other had many loved ones surrounding them”; subsequently, he said, “it was ultimately the solitude and heartache of living alone with only a screen to bind them that severed their romantic union.”

When Janaro realized that many of the photos he took before and after they ended their engagement featured him alone, he decided to approach the other side of the story the same way. The resulting series depicts Janaro's friend and model Doryvette Franco as his former fiancée, with the images showing a window into both their lives during the time they were apart. The photos are arguably at their most powerful when depicting the two of them in tandem: She in her bed in New York, he in his in California; him eating a sandwich and reading a letter, she alone at a table of her own, cigarette in hand; she fixing her stove, he fixing something I assume goes in an airplane. As the series goes on, though, the images diverge — and as they do so, the relationship itself comes to an end. The loneliness is palpable, and the whole thing hits you right in the heart.

More like this
Help! My Boyfriend Won't Tell Me Why He Stopped Going Down On Me
By Sophia Benoit
10 Ways To Be More Empathetic To Your Partner
By Raven Ishak and Lexi Inks
Think Your Partner Is Cheating? These Tarot Cards May Confirm Your Suspicions
By Kristine Fellizar
The Differences Between Kinks & Fetishes, Explained
By Lexi Inks
Get Even More From Bustle — Sign Up For The Newsletter