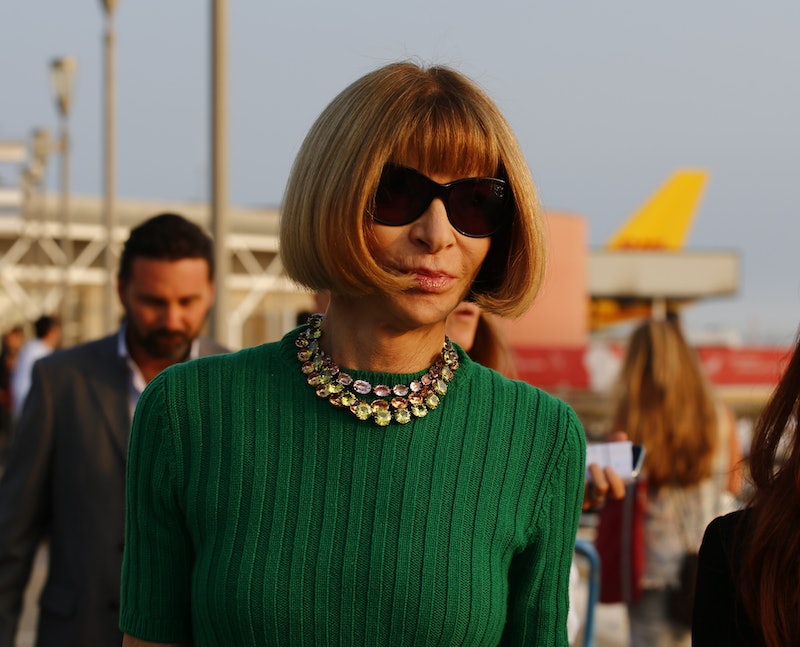 Oh, Anna. You never cease to surprise me. In an interview for Alastair Campbell's new book, Winners: And How They Succeed, Anna Wintour says everyone should get fired at least once in their lifetime, especially in the fashion industry. A routine career tip? No. Solid advice? Actually, yes, probably.

“Everyone should be sacked at least once in their career because perfection doesn’t exist,” she says. “It’s important to have setbacks, because that is the reality of life.” What she's saying does make sense. That old adage/Kelly Clarkson song "What doesn't kill you makes you stronger" holds true, most of the time. Shockingly enough, Wintour would know: she was fired in 1975 from her job as a junior fashion editor at Harper's Bazaar after only nine months on staff, apparently because her creative choices were "too edgy."

Among Anna's other seeds of wisdom shared in the book (which I will definitely be reading): having responsibility helps people work better, and, basically, fake it till you make it. “Even if you aren’t sure of yourself, pretend that you are, because it makes it clearer to everyone else," she says. Maybe owning a pair of editor-worthy sunglasses would help, no?

Now, even though I pretty much live and die by most of Anna's advice (except the ban on all-black outfits, because I'm all about that,) I don't think I'll exactly be trying to get myself axed at work. But if it does happen someday — which I'm sure it will, considering it happens to so many people at one time or another — I'll take a deep breath and keep Anna's advice in mind. Because if she says it's going to be OK, then it's going to be OK.