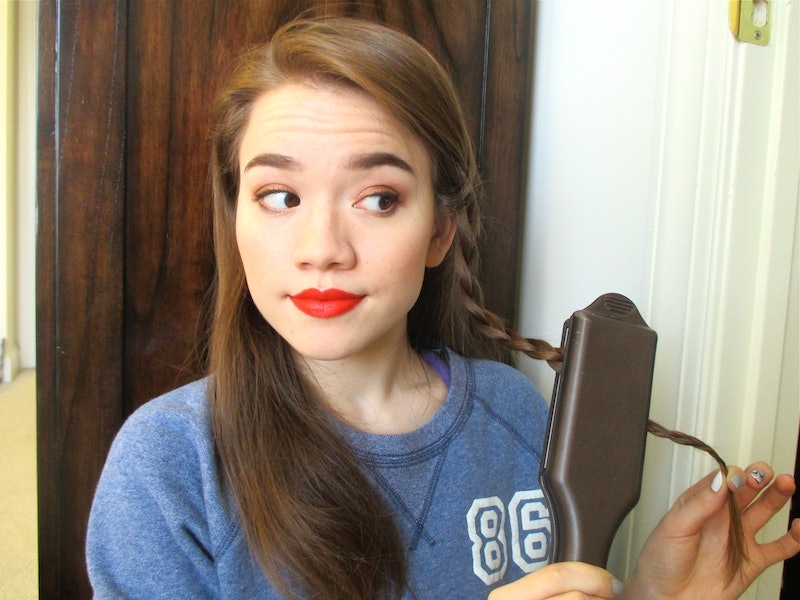 When it comes to my makeup routine, I love taking my sweet, sweet time. But hair? Not so much. I'm basically as lazy as lazy gets. I always let my hair air-dry, and I have a limited arsenal of 'do's that I'll, well, do sometimes. But those times are very few and far between because I usually can't be bothered. So unsurprisingly, I love a good hair hack. Those tutorials that have eight-plus steps? Pass. But tell me I can do something like achieve beachy waves in just a couple minutes and I'm all over it. That's where straightening a braid comes in.

I had seen floating around the internet this idea that passing a flat iron over a braid will create those "effortless" looking waves seemingly effortlessly. I'll bite. As a child I pretty regularly slept in braids to have those crimped waves on the daily, so I was a little skeptical about heating up a braid. Don't get me wrong, it's a pretty brilliant idea, but braids tend to give crimps more than loose waves. So instead of testing just braids, I also tested twists on one half of my hair. Although the hack seems to suggest you can use just one or two braids, I thought four might be better so the heat can more easily penetrate the braids and not cause too much damage while also providing slightly tighter waves. Here's how it turned out.

On the braided side of my head, I did a slightly thinner braid in the front and a slightly thicker one in the back. I did two slow passes of the straightener over each braid (using heat protectant first, of course) and then let them cool before undoing them. As you can see, after heating the braids up, they held their form without any hair ties. So if you ever want a little accent braid but don't want a distracting band holding it together, try this technique.

I followed the same suit with the twisted side of my head, doing a slightly thinner twist in the front and a slightly thicker one in the back. These also held their shape after being heated.

The braided side was a little disappointing. The smaller braid gave me some cute crimps, but the larger braid didn't really do much. And of course, the crimps can only start from where the braid did. So I was left with a rather noticeable dent at the top of where the crimps start which I wasn't a huge fan of.

While the twist side did mostly the same thing with the thicker twist not giving me much to work with, I did get this badass twist from the front section. I wanted more, so I went back and redid some smaller twists.

I also noticed after repeating the process that my hair immediately felt and looked dry and damaged. So if you want to use this method, you'll want to try to get it right the first time.

Overall, I think this method is better suited to an accent crimp or curl rather than the whole head. Because smaller braids and twists need to be used to achieve any noticeable waves, the process ends up taking just as long as it would to simply curl hair. In addition, because each braid or twist needs more concentrated heat to penetrate the style and set the waves, this trick causes more damage than, again, simply using a curling iron. The search for the perfect hair hack continues...

More like this
Your No-B.S. Guide To Female Pattern Hair Loss Treatments
By Parizaad Khan Sethi
15 Must-Have September Beauty Launches, According To Our Editors
By Rachel Lapidos
This Week’s New Makeup Releases & More Beauty Headlines
By Audrey Noble
The Chicest ’90s Updo Hairstyles To Try
By Paris Giles
Get Even More From Bustle — Sign Up For The Newsletter