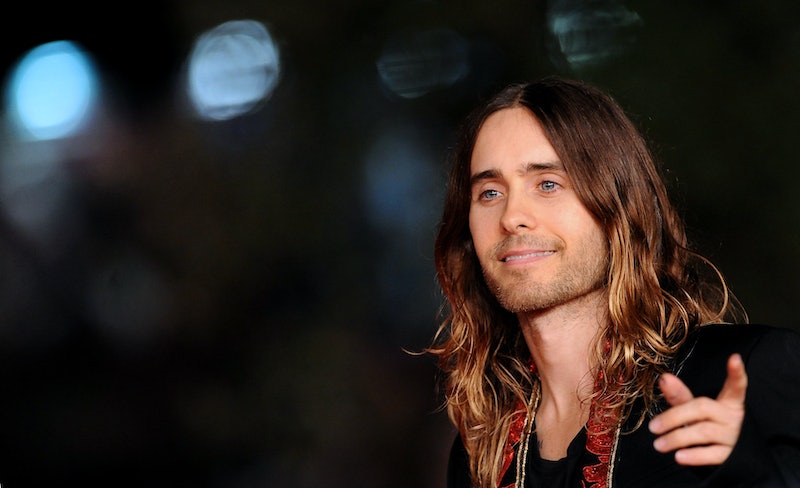 The collective mind of the world was completely blown yesterday when director David Ayer posted a picture to Twitter that displayed a pair of menacing looking sheers alongside Jared Leto's hair, opened and pointed directly at his beautiful, ombre, ponytailed locks. That's right, the best man mane in the business (a.k.a. the entire universe) has been cut. Not since Flynn Rider took a sword to Rapunzel's magical, golden hair has a chop been so momentous — seriously, people lost their shit. The social media patrons of Twitter had #RIPJaredLetosHair trending before the end of that tragic day and mourners of the man bun and man-braid-that-almost-was penned many a farewell to his outstandingly shiny ombre and penchant for pulling it back like only he properly could.

It will be a day long remembered, my friends — a pop culture event we will all be recounting with our lifelong girlfriends over spritzers and gin rummy while too-cool-for-school grandchildren run around wondering who Jared Leto is. Bustle's very own Arielle Dachille summarized it best, while discussing the obvious cultural implications of the haircut heard round the world, with a suggested tribute of, "Pour one out for the ombre Jesus mane to end all ombre Jesus manes." Indeed, Arielle, indeed. Jared Leto's hair, you will be missed, but never forgotten.

I believe it is quite clear on which side of the scissors I stand, with an unforgiving glance being shot in Ayer's direction, director of upcoming film Suicide Squad and now infamous Leto barber. However, I will admit I had a fairly heart healing realization today as I carefully reviewed Leto's new look on Instagram, one that will blow your mind for the second time in two days and may even give man bun mourners a brand new outlook on the updated 'do. Are you ready for it? Here it is: With short hair and a freshly shaven face (because in secondary news the musician also nixed his beautiful beard) Jared Leto and Zac Efron are nearly twins. I can virtually hear your mind exploding.

I know what you are thinking: "How? How is it possible that there are two men in the world that obscenely sexy and charming?" Well, the world works in mysterious ways and this time, the result is famous hottie twins being discovered thanks to a simple Jared Leto haircut. Obviously, we have been given a gift and when the universe hands you something as rare as a unicorn, it's only right to celebrate with a rundown of all the pretty. Allow me to take you on an Instagram journey that proves two of our favorite celebrity men now look exactly alike.

Exhibit A: The New Jared Leto

TBH, I can't remember the last time I was this torn. I cried all the tears when I found out there would be no more long, ombre man locks to swoon over; but this photo? Hot damn, it kind of makes it all better. And it appears that his hair just may have been stealing the spotlight from many other swoon-worthy facial features — traits that he happens to share with Zac Efron. Time to review!

Those Eyes; That Stare

I am pretty sure they are both looking directly into my soul, no? Leto and Efron have equally mesmerizing blue peepers and soul piercing stares. Now that the former's bold middle part isn't the focus, his gaze is on full display and we are free to fall victim to the power of two smolders.

If there was ever a phrase that was overused it is "on fleek" and I hate myself a little for even supporting its existence. However, with man brow game this strong, I had no other choice. These two ridiculously good looking actors might have the most ridiculously good looking eyebrows in Hollywood. While Leto's long, flowing hair used to partially hide his, the newly shortened, swooped back locks leave those bushy brows front, center and framing those baby blues we are now transfixed on. I never thought eyebrows were something I looked for in a man, but after realizing Leto and Efron are twinning with two bold, manly sets, I must revisit my list of desirable qualities.

Greek God With The Chiseled Jaw

Are they actually related and we just don't know it? Because bone structure this good must only run in select blood lines. We have always known that Zac Efron's strong jaw resembled a stone statue of the Grecian variety, but now that Jared Leto shaved off his beloved beard, we can clearly see he was hiding a stone cold jawline of his own. So, again, samesies. And also, is it getting hot in here?

Anyone with eyes knows that, bearded or fresh faced, both Efron and Leto have electrifying smiles that light up a room, but they have also mastered the perfect pout, topping off their total smolder. Now that Leto's lips aren't home to scruffy hair, the world will surely take notice when they are pursed, much like the fandom does when Zac Efron plays it cool with a sly half smile. Actually, I am pretty sure that every time one of these two men smirks, an angel gets its wings. As of Monday, we have two serious pouts on our hands that many would gladly pucker up to.

So, genetically blessed twins, am I right? Of course I am right and now, the world can stop mourning the death of the man bun and start ogling over Jared Leto's pretty face, which is, consequently, pretty in all the same ways as Zac Efron's manly mug. The world sure can be a beautiful place.