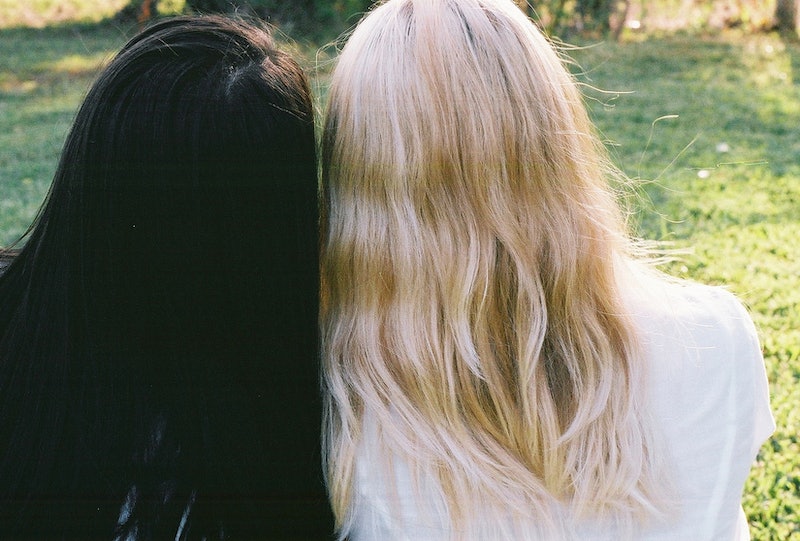 There aren’t many things in my life that have stayed exactly the same since I was born, but my brown hair color is one of them. I’ve been a brunette for every selfie I’ve ever taken, and that’s a lot of selfies. You should probably cue the sad trombone here. This might be owed to the fact that brown is the most common natural hair color — and for a while "common" was the worst thing you could be — but there was a period in high school where it seemed like every girl I had class with was getting blonde highlights or copper lowlights. In a class full of semi-permanent and permanent dye jobs, it sometimes felt like my dull, unaltered hair color was the kind of thing with the power to alienate me from the other girls in the same way that not shaving my legs or wearing training bras and deodorant made me weird in sixth grade.

According to an article in The Atlantic, “An estimated 70 percent of women in the U.S. use hair-coloring products.” That means if I rounded up 10 women on my morning commute, two of them would have some roots growing in, one of them would be rocking the pastel mermaid hair trend, one would be having more fun as a blonde, one would be masquerading as a “natural” redhead, one would have caramel undertones and one will have gone jet black for the winter. The remaining three of us would have the hair color we were born with. We're an endangered, often misunderstood species. There’s something simultaneously alluring yet totally unnecessary about a woman dyeing her hair. I think it’s similar to the notion of being bit by the travel bug. Maybe some women just have it in their blood to go backpacking through life as a blonde for a few years while some of us are just comfortable with our lengthy hair color staycations.

My mom has been dyeing her hair at home for years to cover the grey hairs I’ve caused. If you took a peek in our bathroom closet at any given time, chances are you’d find an unopened box of Clairol Natural Instincts #28: Nutmeg Dark Brown ready to annihilate some unwelcome grey roots at a moment’s notice. My mom’s hair dyeing was a ritual of obligation, not an exercise in self-discovery. When it was a dye weekend, she would dutifully prep the bathroom counter with the meticulousness of a surgeon. She’d don the cheap gloves included in the hair dye box and put on old robe she didn’t mind staining. Lined up on the counter would be an egg timer, a comb, the instructions and the uncapped bottle of dye. “Did I get everything?” my mom would call after the application stage, and I’d go on an Easter egg hunt looking for greys that would give her away. Though she often struggled to douse the strands right behind her ears, dripping dye on the counter and the rug didn’t seem to pose a problem.

If I had asked, I’m sure I wouldn’t have been allowed to dye to my hair, but to be totally honest, I didn’t really want to. It looked like so much work, and when I was growing up I had only seen hair coloring as being an unfortunate chore a woman adds to her list of burdens as she gets older. But there’s so much more to it than that. On many a trip to the salon, I've found myself seated before an eager hairstylist asking, “So what are we doing today?” They’re already fluffing my hair and eyeing where they could add some reddish highlights around my crown, informing me my hair would look great if we "warmed it up a little." Every time I’ve witnessed their deflated reflection in the mirror when I’ve replied, “Just a trim, today.” Even though I’ve never dipped a toe — or a strand — in those color-treated waters, it’s hard to deny there’s a certain mystique about a woman dyeing her hair. After all, I’ve witnessed it myself first-hand several times from the neighboring chair.

The women beneath those foils all have a story. There’s a teenage girl wondering if adding black highlights to her blonde hair was a good idea after all. There’s a woman going red for the first time and hoping she doesn’t walk out looking like Bozo the Clown. Another woman is covering up the first signs of greying hair, and an elderly woman going from white to strawberry blonde is reading magazine during one of her longstanding, regular appointments. Seeing these women experiment with their hair, becoming chameleons by their own hand, has always felt brave to me, and I’d be lying if I said it hasn’t given me many a longing pang to join them underneath those foils, gossiping while we wait for it to be time to wash out our hair and transform into a new version of ourselves. I could make my hair blue if I really wanted to, yet it remains the same brown it’s always been. Maybe my prime hair dyeing days are already behind me, but it does sometimes feel like I missed out on something.

Feeling embarrassed of my uncolored hair didn’t really become “a thing” for me until college. I was at my part-time job, and a new girl had come to help out because we were short-staffed. After exchanging a few careful pleasantries — trying to test the waters between friend and frenemy — she blurted out, “You have virgin hair, don’t you?” Maybe my hair life was more sheltered than most when I was growing up, but I had never heard the term “virgin hair” before that day. Of course, my immediate response was blushing uncontrollably at the notion that a stranger could look at my hair and tell it was chaste and pure. Did this mean I could be shoved into a volcano and used as a ritual sacrifice? “Uhh, what do you mean?” I asked her. “You’ve never dyed your hair,” she said plainly, lowering her voice to add, “I can tell.”

See, that’s the weird thing about being a woman. There are so many rites of passage, and they still feel significant even when they’re superficial. Dyeing your hair is one of these. Maybe it seems like a big deal to me because I haven’t experienced it before, but the first time a woman dyes her hair feels important. It's the kind of thing you talk about with your girlfriends and translate into a coming of age tale to tell your future daughter someday. When you aren't able to join in on the conversation about a purple dye job gone awry, it can make you feel a little left out, like it's middle school again and you're waiting for your boobs to grow in. Hair color trends sometimes feel more important the fashion trends, and celebs changing their hair color is newsworthy. Where does that leave women like me?

As unsatisfying a conclusion as this may be, I think something important we can learn from our beauty preferences is that they don’t always have to make sense to everyone — or even yourself — and they don’t need a justification, either. Try as I may to come up with some profound philosophical explanation as to why I don't dye my hair, it just doesn't exist. Some women might express their mood through their hair or switch up their color when they get bored of their style; I applaud and sometimes envy those women, but that's just not me. And that doesn't mean I'm defective, either. I've had my moments where I think I’d make an awesome ginger, and I’ve definitely used that software to see what other hair colors would look like on my head, but when I look in the mirror and see my familiar brown, I see no reason to change. Maybe someday I will be platinum blonde, but right now I'm fine with being the brunette that I've always been. For some that might mean I'm stuck in a rut, but I'm just happy, and when it comes to how you look, you need to grab hold of that happiness however it comes.