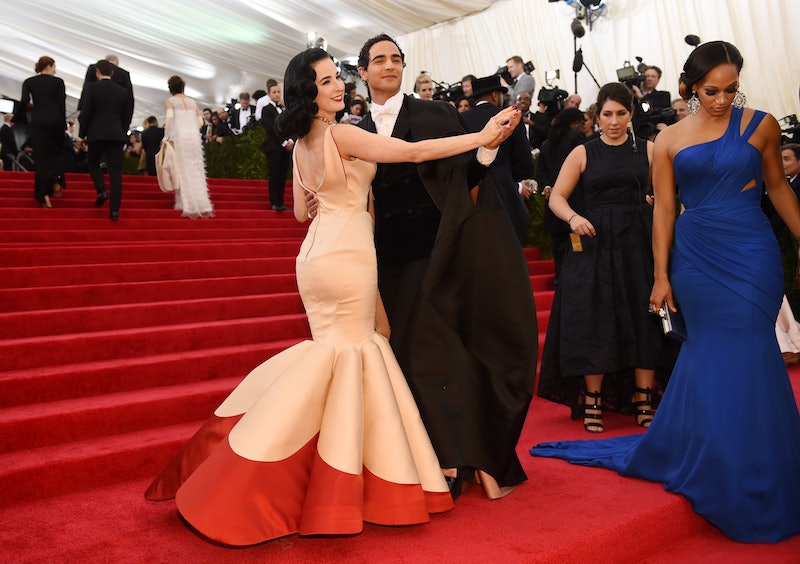 Zac Posen knows how to make a fabulous gown, as evidenced by Rihanna's blush number for her first Diamond Ball or Dita von Teese's nude work of art at the 2014 Met Ball. Even with the success of his own eponymous line, the designer is reportedly taking on another major project. Rumor has it, Zac Posen has been hired as a creative consultant for Charles James, a long-dormant house that is being revived.

Posen's designs have been compared to that of James, whose work inspired the theme of last year's Met Gala, so this pairing would definitely make sense. Harvey Weinstein — yes, the famous film exec — is behind the exhumation of the fashion house, which shuttered after James died in the '70s. That's not as shocking as you'd might think.

Don't be all like, "He makes movies! What does he know about fashion?!" Remember, Tom Ford directed a critically acclaimed film (A Single Man) and Weinstein is wed to Georgina Chapman, who knows a thing or two about fashion as co-creative director of Marchesa, whose gowns are like confectionary works of art. She is also a part of the James consulting team, as is her partner Keren Craig and her brother Edward, who is also Marchesa's CEO. So it's all in the family. Plus, his movies are pretty damn stylish. Imagine that — all of these fashion minds working on a revival of a brand? My God, there is no way this can't be amaze.

Weinstein bought the rights to the Charles James' name from the designer's kids last year. When he acquired the brand, he said, according to Vogue, "Charles James was one of the most incredible couturiers in the history of fashion and this label deserves to be a household name in the same ranks as Chanel, Dior, and Oscar de la Renta. There isn't a single designer in high fashion who wouldn't name him as a major influence. We are beyond thrilled to be spearheading the revival of this brand and bringing it back to the world's finest retailers."

Neither Posen nor Weinstein had confirmed the appointment at press time. UPDATE: A spokesperson for The Weinstein Company sent this official statement to Bustle via email:

Reports that Zac Posen has been chosen to join the creative team in relaunching the Charles James fashion brand are not confirmed. We have no further information at this time. The Weinstein Company has long enjoyed our tremendous relationship with Zac, and we greatly look forward to continuing to work with him as a judge on Project Runway.

In honor of this rumor, I am looking back at some of Zac Posen's highest highs.

The mermaid silhouette is a Posen specialty and this blush wine hue is absolutely gorgeous.

DvT is built like a brick you-know-what and this nude Posen gown, which looks impossible to walk in, is a cinched work of art with red highlights. Love!

Bright lemon yellow ain't easy to pull off but the cut, the train, and Rita Ora's confidence are off the charts.

Gwynnie wore a dusty pink/peach chiffon gown in Posen's familiar mermaid shape. The pleating on this number is so unique.

The "L" isn't for little. It's for luxe! January Jones black gown shows hints of skin and is architecturally stunning. This is easily my top Posen dress... ever!

Anyone else see the pattern? Perfection!

The color of this dress is so similar to the one RiRi wore to her gala, but the one-shoulder detail is to die for.

The cut and color of Lea Michele's gown are perfect for one another.

Silverman's is a guy's gal and always hilarious, but she is not really a red carpet diva. At last year's James' inspired Met Gala, however, she wore a Cinderella-like, ruby-hued Posen gown and looked the part of princess. It was probably her best red carpet showing ever!

Posen has a distinct point of view, doesn't fear color, favors strapless cuts, loves a fishtail/mermaid silhouette, and "gets" women's bodies. I can't wait to see what he does with the resurrected Charles James.