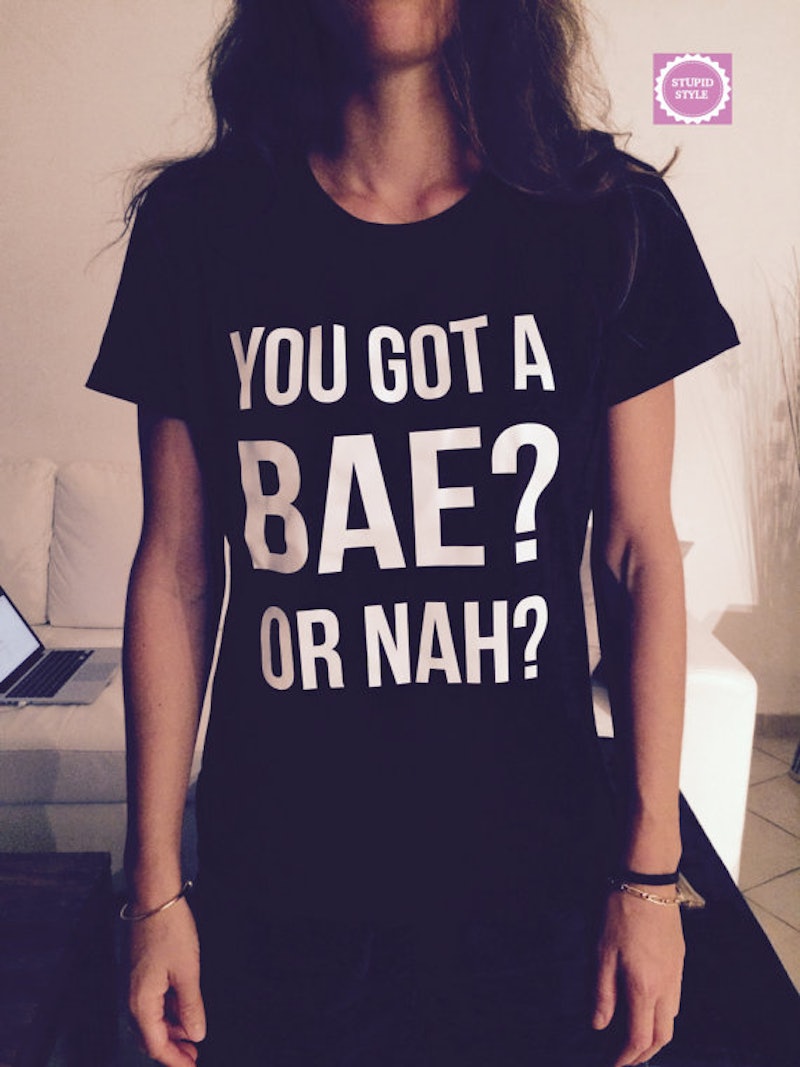 Let's be serious: the word bae is kind of dumb. I might be a persnickety old harridan, but in my opinion, it's just daft all around — harsh on the ear, irritating, nasty, brutish and short. The only advantage, as far as I can tell, is that it's easy to rhyme, and Beyonce likes it. That it's become our default nickname for lovers seems like such a shame, especially when the English language has a treasure-trove of obsolete terms of endearment that are, frankly, both hilarious and infinitely superior. Why would you choose "bae" over, say, heart's root, or pigsney, or powsoddy ? What is the matter with people?

Fortunately, I am here to remedy the situation. Unhappily, it's past Valentine's Day so you can't break out any of these babies to help you on the most romantic day of the year — and, believe me, they would help get you some — but inserting them into all woo-worthy correspondence is definitely your best bet for 2015. You may want to include a translation, though, just in case somebody takes being called a "ding-ding" the wrong way. (Can't think why that would happen, though.)

Here are 20 seriously amazing terms to break out the next time you feel tongue-tied in a romantic clinch.

Definition: "My heart's root," in the botanical sense.

Sample Sentence: "What do you want for dinner, my hertis rote?"

Sample Sentence: "Sweeting, would you scratch my back for me? Right there."

Definition: This one's a puzzler: theorists are divided as to whether it refers to bells (literally, "you ring my bell") or, erm, the testicles.

Definition: We genuinely don't know what this one means. It may just be rhyming nonsense. Don't pretend you've never done that.

Sample Sentence: "You're my mamtam, nobody else's, are we clear?"

Definition: This is an old word for "dove,"derived from the Latin word columbula.

Sample Sentence: "Aww, culver, you didn't have to wash all my socks and pair them neatly for me!"

Definition: This is just adorable, and yes, it means precisely what it says.

Sample Sentence: "Yes, you are my heart's gleam even though you just burnt the bottom out of the saucepan."

Definition: Shakespeare liked this one: he used it in his Henry plays in 1600. It means a very young lamb, but it was also used as a term of endearment for both lovers and small children.

Sample sentence: "You know I love you, lambkin, but would you mind not wiping your nose on my sheets?"

Definition: The cluck of chickens. "Hen-pecked" wasn't a thing yet.

Sample sentence: "What do you want to do for spring break, my chuck?"

Definition: This means a calf — which was a big compliment at the time, calves being both very expensive and very cute.

Sample Sentence: "No, tib, those jeans look great on you, Cheryl's just being a wench."

Definition: This one appears to be fairly general in meaning — it was first used in a play in 1693, and quietly disappeared. For all we know, it was something the play's author, William Congreve, made up — but "kin" was a common suffix in 13th-16th century English to make something sound small and cute.

Sample Sentence: "Awww, you look like such a nykin in that Ewok hoodie."

Definition: Calling somebody your sweet cinnamon (as Chaucer does in The Miller's Tale ) is a pretty guaranteed way to get into their trousers.

Sample Sentence: "You're my sweet cynamome, and not just because I like your buns."

Definition: This is from Chaucer's Miller's Tale too — "She was a prymerole, a piggesnye" — and literally means a pig's eye, but as the centuries went on it became an insult, so use this one with care.

Definition: This was a Ben Jonson speciality: he uses it in The Alchemist in 1610, and it appears to be a translation of the German Fledermaus, or bat.

Sample Sentence: "Oh, flitter-mouse, I wish you wouldn't worry so much about the apocalypse."

Definition: This adorable and confusing term comes from a Scottish (very lewd) poem, "In Secret Place This Hyndir Nycht," by William Dunbar. It means an unweened calf.

Sample Sentence: "Don't be jealous, everybody knows you're my hurle bawsy."

Definition: This translates literally as "darling."

Sample Sentence: "Mitting, could you not flush? I'm trying to shower."

Definition: What this has to do with love is anybody's guess, but this word used to mean a rough unshaped piece of wood.

Sample Sentence: "Listen, nug, why don't we just stay in and watch Netflix?"

Definition: If this one sounds familiar, you're right; it's another word for parakeet.

Definition: Not gal-pal, as you might be expecting; instead, this is a shortening of gold-poll, meaning golden-head.

Sample Sentence: "That platinum wig looks so cute on you! You're my golpol!"

Definition: This one's my favorite. It's an obsolete word for a Scottish pudding which is made with rum, sugar, nutmeg, and toasted bread, or possibly by stewing sheep's brains, which is an alarming bit of leeway.

Sample Sentence: "Do it for me just this once? Please, powsoddy?"

Definition: Before you get sentimental, this isn't actually about the reptile. Turtle doves were the epitome of loyal romantic love; to call somebody your turtle usually meant you were married. So don't break this one out until you've ordered the invites, guys.

Sample Sentence: "I take you to be my lawful wedded turtle."