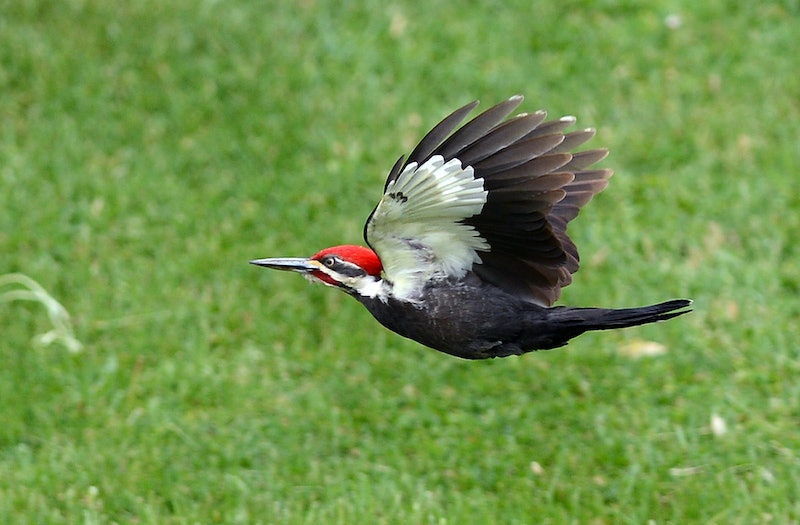 You know that iconic scene in Aladdin where he sweeps Jasmine literally off her feet onto a magic carpet, and they gaze lovingly into each other's eyes as their eerily perfect hair blows in the wind? That happened. In real life. Except when it went down in the real world, it wasn't a pair of disproportionately wide-eyed, animated humans. It was a baby weasel who rode on a woodpecker's back, and amateur wildlife photography Martin Le-May got the whole thing on camera.

Here is a thing you maybe didn't know until this moment: Weasels will hunt woodpeckers. Actually, they'll hunt most birds, using their long bodies to stealth their way into nests, and right before they eat their prey, they will dazzle them with a weasel war dance. Imagine if someone started awkwardly flirting with you and then tried to eat you—that's basically what weasels do to birds. But apparently this baby weasel got a little bit too ambitious in his pursuit of a snack, and ended up hitching the ride of his life. As you can see from his not-so-ferocious form, he is no match for the fully-grown woodpecker he tried to take down.

Le-May was out on a walk with his wife when the animal scuffle began. He recalled how, at first, it wasn't clear what the commotion was about, but at right about the same time that he pulled out his camera, he saw what the weasel was up to. Fortunately, their presence distracted the little guy long enough for the woodpecker to buck him off for good and get away. Hopefully the bird learned a good hard lesson that day: Buzz Buzzard isn't the only jerk out in the wild that he has to keep a look out for. Here is the first image that Martin captured of the duo's spat:

And, naturally, the memes are already coming:

Way to be on the ball (er, woodpecker), Internet.