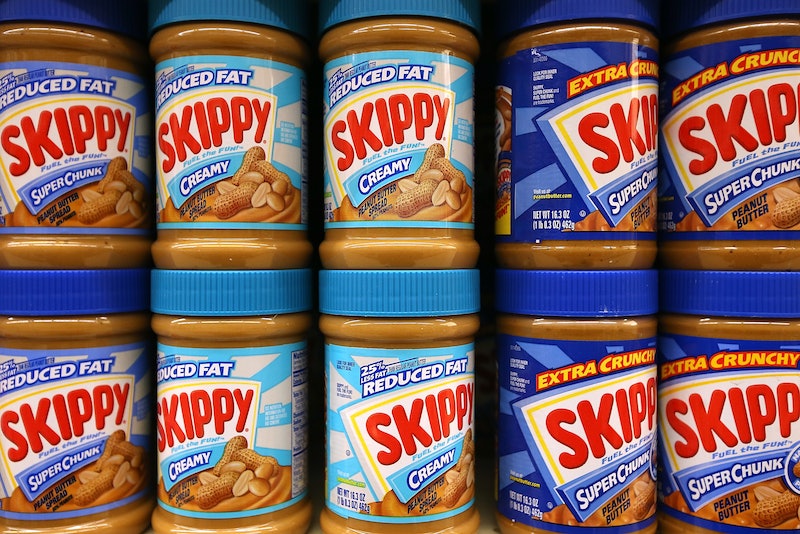 In the news this week: Peanut butter is amazing. And not just because a big spoonful of it right out of the jar (refrigerated and chunky, preferably) is one of life's underrated perks. Two recent studies this week have revealed some hidden benefits of peanut butter: It could play a role in preventing breast cancer and detecting Alzheimer's disease.

Detecting Alzheimer's was once only possible by examining a person's brain after they died. MRIs and blood tests for certain genetic markers have made detection easier, but there might be an even easier diagnostic tool yet: Peanut butter. Researchers from the University of Florida found an inability to smell it may signal cognitive decline. How is this possible? In Alzheimer's patients, one of the first parts of the brain to deteriorate is an area in the front part of the temporal lobe that's involved in forming new memories — and processing smells. While Alzheimer's is known for it's effects on memory, another of the first areas of trouble is in sense of smell.

For the study, lead researcher Jennifer Stamps had people close their eyes, block one nostril and tell her when they could smell a small cup of peanut butter. They they repeated this with the other nostril. For each side, Stamps recorded how far away the cup of peanut butter was before it could be smelled. People with Alzheimer's tend to have more damage on the left side of their brain, which is linked to the left nostril. Stamps found that participants who were later diagnosed with Alzheimer's were much less sensitive to the peanut butter when using the left nostril. On average, they needed it to be nearly 4 inches closer to the nose when trying to smell with this side.

Stamps says this test can't be used to diagnose on its own, but could be helpful in confirming Alzheimer's diagnoses. Her team also plans "to study patients with mild cognitive impairment to see if this test might be used to predict which patients are going to get Alzheimer's disease," she said.

But FYI: Peanut butter per se isn't really an integral part of this smell test. It seems that's just what the researchers used, and a lack of ability to detect other smells with the left nostril could work similarly.

Nuts and peanut butter were directly implicated in a study published last week (in Breast Cancer Research and Treatment) however. Researchers from the Washington University School of Medicine in St. Louis found that adolescent girls (ages 9 to 15) who ate peanut butter and nuts twice a week were nearly 40 percent less likely to develop benign breast cancer by age 30. Benign breast cancer includes lumps of fibrous tissue, cysts or overgrown cells in the breast that aren't cancerous but could raise breast cancer risk later in life.

"These findings suggest that peanut butter could help reduce the risk of breast cancer in women," said lead researcher Graham Colditz. Eating beans, lentils and corn was also linked to lower risk, though not as significantly.

In addition to being high in vegetable protein, peanut butter is a decent source of vitamins and minerals such as thiamin, niacin, vitamin E, folate and magnesium. The fat in peanut butter is the mostly the good-for-you monounsaturated kind. Peanut butter is also relatively high in some polyphenol antioxidants (which fight inflammation and boost immunity) and contains a small amount of red wine's magic antioxidant, resveratrol. Also, it's freaking delicious.

More like this
10 Pumpkin Recipes That Are Way More Creative Than Pie & Lattes
By Rebecca Deczynski and Alexis Morillo
On TikTok, Tinned Fish Date Night Is The Latest Viral Food Obsession
By Emma Carey
This Psychological Effect Might Be Keeping You From Hitting Your Goals
By Lexi Inks
Chelsea Clinton On The Best Advice She Ever Got From Her Mom
By Brianna Kovan
Get Even More From Bustle — Sign Up For The Newsletter