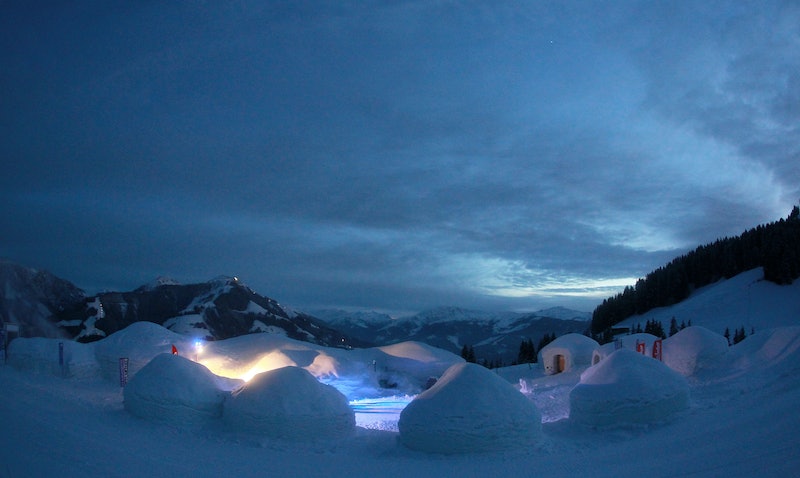 Guys, we found cold weather Ron Swanson, and it's this guy who has an entire video demonstrating how to make your own igloo. Undoubtedly, you probably attempted to build your own a few times as a child (or maybe you've tried it during this winter which is, quite frankly, being a bit of a troublesome seasonal nuisance), but unlike you and your aimless snow-packing self, this guy knows what he is doing. He is what you might aptly call a hardcore snowman (like a "woodsman" or "seaman"; not like the thing you build in your front yard). I guess if you're going to go on multiple day-long solo snowshoeing trips in Utah (why, though?) in the middle of February (NO BUT REALLY, WHY?), you have to be able to shelter yourself for survival.

The total amount of time for an experienced igloo builder to do the whole thing right is about five hours, although our guide has managed to crop down all the busy work to show us the process in ten minutes. More important than time, however, is the precision work that goes into erecting this structure, particularly angling the snow blocks toward the center point of the circle. While I am usually reluctant to partake in anything that smells even vaguely of math, the methodology behind it all is pretty fascinating. Plus, watching this guy use his snow-knife to make perfect ice blocks will make you wonder why we all decided to start hating snow in the first place—it really is kind of awesome.

Here are a few of the steps he takes building his snow hut:

First, he carves a perfect hole in the snow, cutting out the snow in blocks using a knife:

Careful to make sure the angles of all the blocks match the angle of the inner point of the circle, he starts stacking until he has his first two rows. After the first two rows are in place, he digs himself an entrance from the very bottom of the hole.

After each row, he gets out and packs snow into the spaces between his snow blocks.

Once the snow starts curving inward on the roof, he uses three saws and two ski poles to hold the roof up, "leapfrogging" from them block to block as he goes along.

He then adds the final portion of the roof to the top, and packs snow on the edges on the outside of it for extra protection from sun and wind.

And the last step is using extra blocks to form a more solid entranceway:

There are several reasons I can think of why you need to learn how to make an igloo today, so listen carefully:

So there you have it, folks. Here is all the information you need to stay toasty warm in apocalypses big and small: