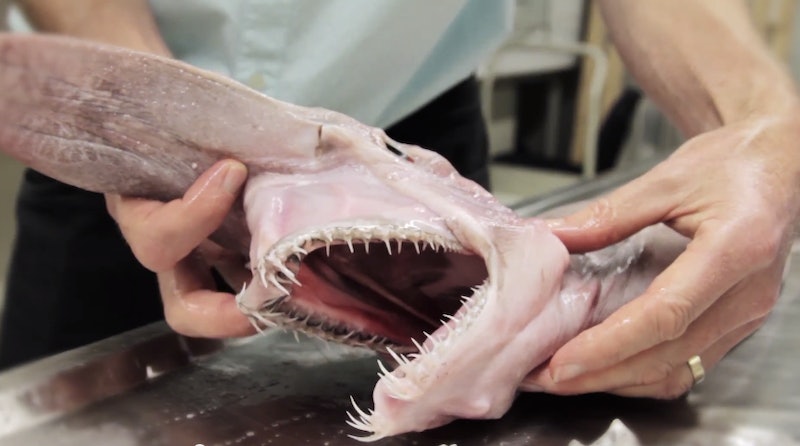 Prepare to be disgusted or intrigued, depending where your proclivities lie. Either way, you should be at least vaguely terrified because this rare Goblin Shark that washed up on the coast of Australia is one of the most unholy looking things that is a real creature that actually exists. It looks like a bag of moldy skin with a sword pushing through underneath its face skin to stretch it out in even more macabre ways. Basically, this is the kind of mess people dream up and put in movies like Saw or whatever horror movies are big these days. (I wouldn't know because I'm not a masochist who watches horror movies.)

The Australian Museum released this video of the shark, presented by their overly enthusiastic Ichthyology Collection Manager, Mark McGrouther, who describes the shark as "very, very cool" and "amazing looking" with an "incredible jaw". The shark is also capable of detecting electricity (the means by which it stalks its prey), which I'm going to let it have without a hint of sarcasm, because that's actually an X-Men level skill. McGrouther, despite his status as fish expert, has only seen four such sharks in his career because they're so rare, which makes this encounter a "very special day" for him. Although, another Goblin Shark turned up in Australia a mere four weeks ago, so maybe these very scary looking creatures are making a play for earth. Watch him gush over the weird looking thing below:

More like this
26 Ghost Story Podcasts To Get You Ready For Halloween
By Jessica Booth, Mia Mercado, JR Thorpe and Emma Carey
15 Easy Pranks To Play This Halloween
By Emily Kelley and Lauren Grant
TikTok's Butter Board Might Be The New Cheese Plate
By Emma Carey
8 Completely Unserious Tips To Make Your Cuffing Season A Success
By Ginny Hogan
Get Even More From Bustle — Sign Up For The Newsletter