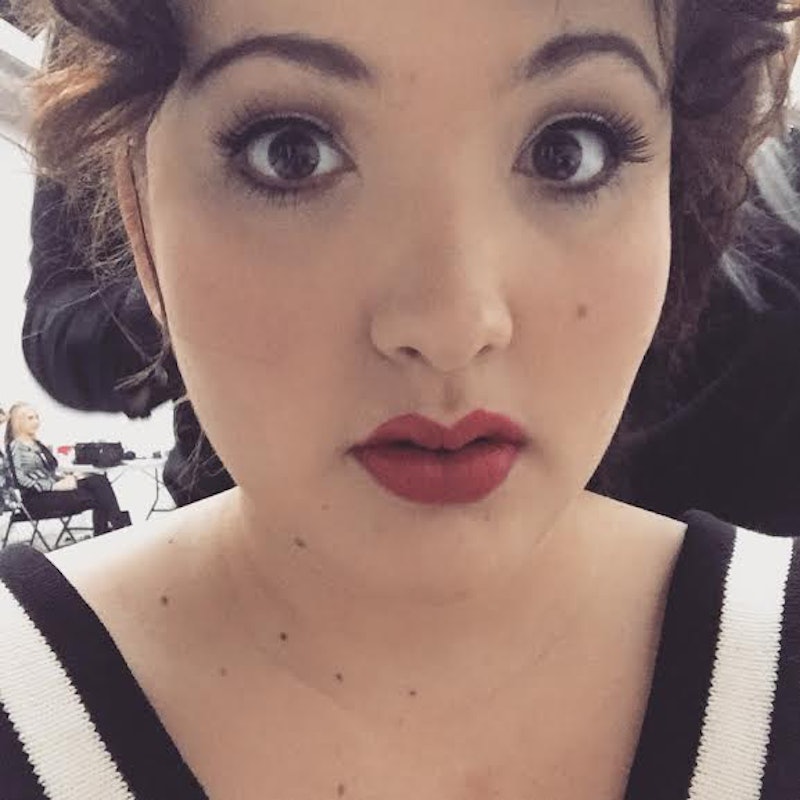 I stood backstage, surrounded by three total strangers whilst countless others bustled, stripped, hair-sprayed and teased around me. One of my strangers attempted to decipher whether gold or silver jewelry better matched my complexion. Another used what can only be described as a post apocalyptic-looking machine to steam my high end wrap dress whilst I perspired profusely. And the third focused on trying to straighten bangs that haven't been straightened since 2009, when hot irons were by BFFs because I was convinced that curls would only ever look good on Julia Roberts circa Pretty Woman. I was at New York Fashion Week. No, I was walking at New York Fashion Week. I was living this bizarre, beautiful and eccentric dream that aspiring models (and a ton of women everywhere, let's be real) dare to dream. And it was simultaneously overwhelming, surreal and almost ethereal.

I wasn't one of those little girls — you know, the ones who yearned to someday walk the catwalk of some major designer runway coated in pounds of makeup, dressed in couture creations fit for basically nowhere other than the runway. It wasn't that I was inherently disinterested in fashion, or that I believed my interests in things like literature or astrology somehow made me unworthy of the fashion world — quite the opposite, in fact. Pre-13, I loved glitter tutus and embellished ballgowns. The main reason I enjoyed going to church with my [very] Catholic mother was the simple fact that she'd let me wear every frilly, sparkly, lace-y, shimmering ensemble of my choosing. Post-13, the possibilities of weekend shopping excursions with my girlfriends were the only things that made attending school for a full, long five days semi-bearable. In retrospect, my aversion for all things runway was rooted — like most of my insecurities or angsty responses back then — in my body.

Three months into 2015, people are beginning to throw around the phrase "Curvy Girl Era," as though we've entered some kind of body revolution that's going to lead to the ultimate size acceptance. The problem I have with this tagline is simply that it hints at some weird kind of reverse sizeism — something that implies "real women have curves," or "meat is for the men; bones are for the dogs," when body positivity has never been about convincing anyone that "fat is better than thin."

When I think about the size acceptance movement coming to some sort of climactic and life-changing zenith, I think only of the "acceptance" I hope to see someday. The moment when fat men and women can just be and exist without fearing constant scrutinization and hate. The moment when someone who is actually happy being fat can say that without being bombarded by Diabetes pamphlets and a gym membership. I think of those runways — and the moment when plus-size model Denise Bidot (who began walking Chromat's New York Fashion Week show in 2014) isn't the exception to the rule; when women of every size can walk down all designer runways as equals. So I suppose this is why Carrie Hammer's Role Models Not Runway Models show appealed to me the very second I read its name. Not because there's something profoundly wrong with "runway models" as human beings, but because there is certainly something wrong with the fact that the majority of them are one size, and one size only.

Since 2012, designer Carrie Hammer has been working at creating luxury workwear for all women — women from every professional background you can image; women of every size on the spectrum. And in 2014, she debuted her first showing at NYFW. This February's A/W show marked her third runway display, and featured powerful, inspiring women such as Black Girls Code founder Kimberly Bryant, Malala Fund co-founder Shiza Shahid, women and girls' rights activist and Loreen Arbus Productions Inc. president Loreen Arbus, American Horror Story actress Jamie Brewer and, well, me. To feature in any kind of group with these women — these bosses and entrepreneurs and fighters of oppression (be it racial injustices, stigmatization towards the disabled or women's inequality) isn't just humbling, but also dream-like. All of these women have very unique stories and flaunt their individuality (societally perceived "flaws" and all) with grace, elegance and and the kind of empowering confidence I hope I personally fight for in my own work in body positivity and size inclusivity.

When I consider that prior to Carrie Hammer's runway, there has only been one other plus-size woman to walk NYFW (the lovely and aforementioned Denise B.), it feels pretty striking to know that I'm — in some way — part of the change... to know that I'm No. 2. Sure, it was fun to get my makeup done; to be styled by a professional who knows way more about fabrics and texture and accessorizing than I ever could; to have reporters and cameras treating you, if only for the time it takes to answer three questions, like you're doing something grand and elaborate. But the most exciting part of it all was knowing that there is, in fact, a higher end designer who gets it. Carrie knows that the women shopping her line aren't all a size 2. And in turn, she doesn't want all the women on her runway to be a size 2 — which is, IMHO, the mantra more designers and brands should be striving to emulate.

That being said, walking a NYFW catwalk is sort of a big deal. New York City's is pretty much the quintessential fashion week — the one people are willing to jet set to at the last minute. The one that "it models" (be it Kendall Jenner or Molly Bair) strut down whilst flashing lights and journalists from every major fashion publication in the world admire from press corners. And this all means that a sense of pressure is unavoidable. No matter how honorable — how real and raw and radically beautiful — the intentions of the C.H. show are, the nudging voice in people's heads that says, "You must look 'perfect'" is still going to be making an appearance. The little red and rude dude who says, "You need to look and act and walk like a runway model," will pop up on a reluctant shoulder.

All this means that some of the women were nervous. Some concerned with "sucking it in," or "walking the right way," or "looking like Karlie." And it's sort of insane to witness. These are women who, after all, kick ass in pretty much everything. Yes, they're beautiful. But they're also widely successful — a loaded word but one that can encompass everything from work achievements to inner being to public recognition and adoration to self-respect. They're women who work every day at molding this fractured world into something a little more positive. A little brighter. Yet, they are not immune to those programmed norms — the ones that tell them they have to look a very specific way in order to be worthy; to be perceived by the rest of the world as exquisite or smart or good.

As a highly socially anxious person, my predominant concerns before the catwalk revolved around, "Will I throw up on the cameras?" and, "What if I stumble?" But a pretty remarkable thing is realizing that I really wasn't concerned with how I was aesthetically perceived. Sure, I knew that I would've felt more comfortable (and subsequently "prettier") had my bangs been left curled. And I knew that there probably existed less awkward arm and hand placement than the in-pocket look I ultimately went for. But I figured that, no matter what, the point of Carrie Hammer's show was to be me — to embrace the things about me that society (as some kind of all-encompassing entity) still generally considers "bad" attributes, be it my cellulite-y thighs or chubby cheeks or my broad shoulders. Knowing as much made the actual strutting part easy — knowing that I was part of a show that cares about the things that I care about made it simple. Made the act, in and of itself, necessary.

In conversations with plus-size women battling body demons, I know that many of them feel "on display" in quite a negative way — like everyone is watching in silent (or sometimes not silent) judgment as they squish into too-small airplane or buss seats, or as they make their way to a fitting room, or as they do something as simple as walk down the street. I used to feel like that, too. Like most humans were taught to hate and poke fun at my body, and so they must be doing it constantly. Weirdly enough, Role Models Not Runway Models is the first time I have actually been on display, in front of hundreds of spectators and ultra flash. It's the first time I was acutely aware of the fact that everyone was staring at me. But it didn't feel bad. I'm sure not everyone who was in that room is as fat positive as me, and I'm sure that some of them subscribe to the, "You have such a pretty face, but you'd be so much prettier if you lost the weight," ideal that I've heard since I was eight. But it didn't matter. I was on display, but by being confident in my own skin, public opinion ceased to matter. Whether or not people cared about the wobble in my tummy ceased to matter.

The old adage that, "It doesn't matter what people think of you; only what you think of yourself," is one I've heard more times than I care to recall. But like most proverbial musings, there's some truth to it. Confidence as a plus-size woman has to be learned, because in order to achieve it, the fat shaming taught within our culture needs to be un-learned. It can be grueling and weird and uncomfortable, but it is possible.

My adolescent self avoided runway talk because the idea of someone like me being represented on a couture catwalk seemed too unrealistic — too counterintuitive to the body policing I was accustomed to and that I figured was too societally engrained to ever change. While it's easy to dismiss Carrie Hammer as the exception and to assume that her show — and the shows of other designers aiming to feature model diversity in other aspects — is a trending fad, I choose to believe that it's not. I choose to believe that enough people out there want size acceptance, body positivity and body diversity to infiltrate all elements of life. And those are the people who will make it happen.