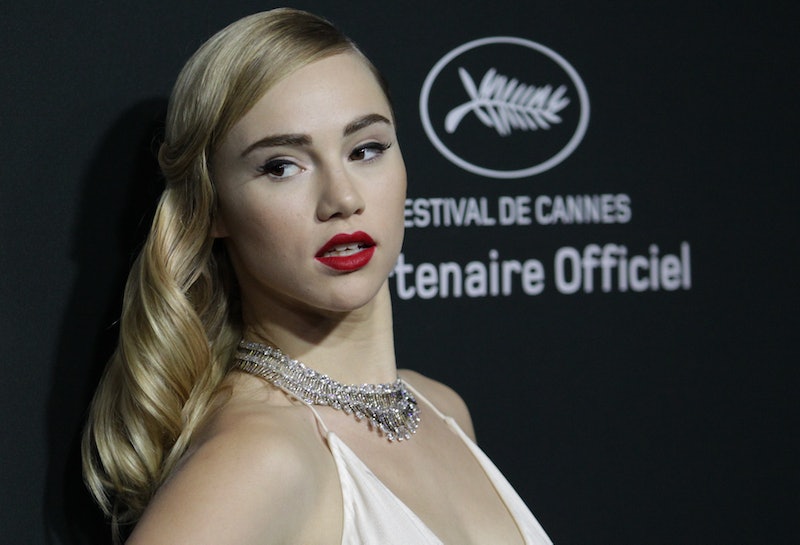 Every so often a top model and high-end brand collaborate and the union is undeniably right. There's no questioning if the model fits with the brand's aesthetic or vice versa; it all just works — and makes you want to buy the product ASAP. That's kind of the goal, right? Suki Waterhouse for Burberry is one of those partnerships, for sure. Waterhouse has walked the runway for the brand before, and has been the face of Burberry's eye makeup collection as well. Now, Waterhouse is back with Burberry for their new lipstick campaign, and it may be my favorite Suki x Burberry moment to date.

The brand new lipstick collection is called Burberry Kisses and features a range of colors that create "buildable sheer to hide coverage with just one shade," according to a press release. Waterhouse looks stunning in the first image from the campaign, in which she wears a Taylor Swift-approved "red lip classic," and her look features a trendy bold brow and burgundy nails that really complement the entire photo.

The campaign was shot by Mario Testino, only adding to the chicness of it all. It's true that Waterhouse and Burberry know each other very well by this point (this is Waterhouse's seventh Burberry campaign), but the model is still relatively under the radar. So, just in case you aren't quite up to date on all your Suki Waterhouse knowledge, I've got you covered. Here are five fun facts about the Burberry Kisses campaign star.

...but you probably already knew that. Waterhouse and Cooper have reportedly been dating since 2013, and also are probably the most attractive couple ever. But dating a movie star is pretty boring, really, when compared to all of the model's other accomplishments.

2. She's Been Called An 'It Girl' By The New York Times

The term 'It Girl' is thrown around pretty loosely in the fashion and entertainment world, but when The New York Times refers to you by the title, it must mean something, right?

3. Her Instagram Will Make You Love Her Even More

Waterhouse posts a variety of photos on Instagram. My favorite part, though? It's not ALL campaign teasers and modeling shots. Of course, there's some of that too (it's kind of her job), but there are also quite a few pictures that make you realize that she's just a regular (albeit very interesting) 22-year-old girl in a lot of ways. Do I think we would be friends? Probably.

Of course she does. NBD.

As one should. As. One. Should.