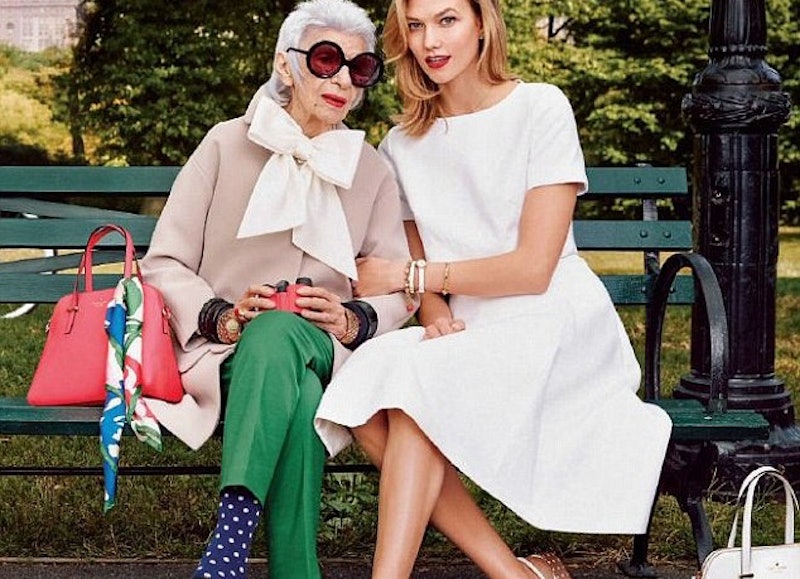 This year is the year of not dressing your age. It's about going back to your teenage bedroom, letting Alanis Morissette's songs crowd the space as you tie a plaid shirt around your waist and steal your mom’s dark lip stain. Or it's about speeding forward and touching hands with an older version of yourself, dying your hair a silvery grey and donning dresses that resembled your grandmother’s curtains — but in the best possible way. Whichever look you subscribe to, 2015 is all about falling into an identity crisis.

And it is amazing. No longer are there hard and fast rules on what is appropriate for your age. The gates are opening and we can break out of our usual uniforms and poke around more interesting waters. Prints that were only found on carpet bags are now fair game; Snoopy sweatshirts that were once synonymous with coloring books are having a comeback — and in a real way.

But what really gets me excited about this new willingness to dabble isn't just the ability to get away with wearing something that Edna from the retirement home wears (which I love: you go, Edna), but that the trend is shifting our ideas of what "age appropriate" means. And ultimately, shifting our ideas on how we think about age in general.

The notion that we’re "running out of time," and quickly, is something that’s constantly being pushed at us. We have 10 years, give or take, to be rosy and beautiful and the very stuff that moves handsome men to write brokenhearted songs. And after that, well, it’s straight to mom jeans and feathered bangs for ya. Enjoy those dresses now ladies because stretch waist capris in coral shades are just around the corner! Where once you were this vibrant, interesting person, you now have to agree to fade into the background, all because you have lines around your mouth and are no longer relevant.

How terrifying is that? It’s no wonder that half of my friends are already slathering on wrinkle cream a la Queen Ravenna coming out of her milk bath.

You see, “young” can be limiting if you're told it's the only option. There need to be more choices for what it means to look beautiful. We need to broaden the idea. And that’s exactly what we're seeing happen these past couple of years.

Brands like J. Crew, MAC and Kate Spade started to reinforce that style has nothing to do with trying to look younger — but everything to do with identity. It’s about giving your personality a voice, no matter how many calendar years you have under your belt. Why can’t older woman embrace personal style the same way their 20 or 30-year-old counterparts can? Who, exactly, decided to put the kibosh on that? And why, for the love of god, are people listening?!

To start reversing the damage that we’ve done, J. Crew splashed Linda Rodin all across their catalogue spreads, not even touching on the fact that an older woman was being used in the campaign. Because, who cares? Good looks good. Kate Spade launched a campaign with Iris Apfel and Karlie Kloss entitled “Stylish at Every Age,” showcasing a coolly flattered Apfel on a park bench as a handsome gentleman tires to wile her with his charms, with Karlie straight chilling on the bench right next to them. MAC enlisted Apfel and her on-point eye for color to create a line that has “as much flair and joie de vivre as the woman who helped create it.” In a society that asks older women to fade into the background, seeing campaigns like this is inspiring. And healing.

Then, on the flip side, we have twentysomethings dressing up in granny chic, trying to channel their inner Apfel and Osts because — let’s give credit where credit is due — these grannies are chic. But what is more interesting is the underlying reason for their doing so. Yes, wrapping yourself in cocoon coats and midi skirts with chunky sweaters is playful and fun, but it can also be seen as this Millennial generation’s act of rebellion. Where in the 90s we had grunge and angst, now we have an irritation towards the fixation on youth — and we reject it by growing old. Way old.

At the forefront of granny chic is Tavi Gavinson, teenage blogger turned Editor-in-Chief of Rookie Magazine. When asked about her silver-blue hair and frumpy layers she cheekily replied (in an interview with Rolling Stone ):

“People talked about how when you're a woman of a certain age you stop caring about certain things, and I was like, 'If I can try that now I will be ahead of the curve.'"

In this way, she can both thumb her nose at the constraints of age as well as underline that style isn’t about looking "attractive." Fashion isn’t about being "pretty." It’s about curiosity, creativity and having confidence in the person you are — at any age.

Aging is something to get excited about, not something to fear. In her memoir, Diane von Furstenberg, resident bombshell, puts it into perspective beautifully:

“I cannot pretend that I am younger than I am, and truly I feel that I have lived so fully that I should be twice my age.”

Adding onto that, Carmen Dell’Orefice (the oldest working model at age 83) said, “Age isn’t ugly. Age is age.” We make it up to be this giant social construct that dictates a lot of what we do, but in the end, it’s an arbitrary notion. That’s why this year’s trend to either go backwards or forwards, dabble in youth on a Tuesday and seniority on a Wednesday, is so fantastic. It gives a nod to the social ideas that we trapped ourselves in, and then hitches up its skirt and hops the fence.

In the end, what the rise of these two opposing trends at the same time comes down to is this: "Appropriate dressing" shouldn't be something that we subscribe to because who, exactly, decided for us what was appropriate?

As Apfel has said simply, “When the fun goes out of getting dressed, you might as well be dead.”

More like this
You Can Now Buy An Anna Delvey Halloween Costume & I Am Screaming
By Allie Fasanella
The Queen Will Likely Be Buried With These Special Jewels
By Darshita Goyal
Prefer Alcohol-Free Perfumes? Water-Based Fragrances Are On The Rise
By Audrey Noble
How To Get Your Hands On The Pat McGrath X Supreme Nail Kit
By Justine Knight
Get Even More From Bustle — Sign Up For The Newsletter