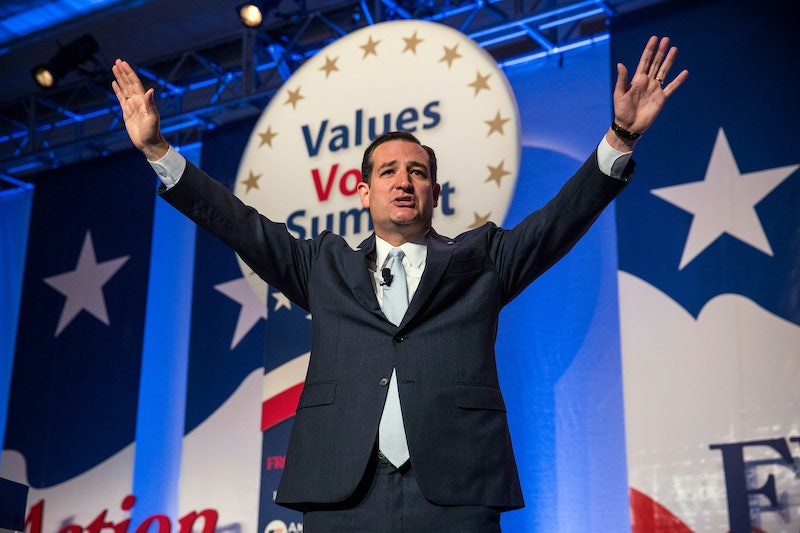 Having successfully defunded Obamacare and endeared himself to Republicans everywhere, Senator Ted Cruz took a victory lap today at the Values Voter Summit, a sort of smaller, crazier Republican National Conventional that hosts conservative firebrands and would-be Republican presidential nominees every year. (OK, only half of that sentence is true. You guess which half!) In his speech Friday, Cruz warned the crowd of the Obama administration’s nefarious and — oh yeah! — non-existent plot to charge nuns millions of dollars if they don’t hand out medical abortion pills to seniors. Even if the Cruz’s claim was true, the plan would be more confusing than nefarious, as most seniors would seem to have little use for “abortifacients,” as the Texas Senator calls them. But the claim wasn’t true.

“This is an administration that is telling Christian companies like Hobby Lobby, is telling comp... That the Little Sisters For The Poor, that they must provide abortifacients or pay millions of dollars in government funds,” Cruz intoned earlier this morning. “The Little Sisters Of The Poor is an order of nuns that provides health care to the elderly poor. The federal government is coming after them saying they have to provide abortifacients as well.”

Cruz is probably thinking of the Affordable Care Act’s requirement that employers cover emergency contraception in their insurance plans. But while the end goal of emergency contraception is broadly similar to that of medical abortion pills like RU-486, they’re not the same thing. Plan B One-Step and other emergency contraceptives work by delaying ovulation or, sometimes, preventing the fertilization of an egg that’s already been released, in effect preventing a pregnancy from happening. RU-486, on the other hand, stops the development of a pregnancy after a fertilized egg has already been implanted in the uterus.

Plan B is covered under Obamacare while RU-486 isn’t; these distinctions, though, are seemingly irrelevant to the junior Senator from Texas.

Cruz was about as on-message today as he could have been, but he somehow managed to get heckled from the left — both ideologically and spatially — as protesters repeatedly yelled at him for not supporting comprehensive immigration reform. Cruz reacted like a true statesman, accusing his critics of being “President Obama’s paid political operatives” and telling them to quiet down so he could keep talking.

Cruz seems to have let his post-filibuster fame and fortune go to his head. The Daily Beast compares him to Miley Cyrus:

What’s next for Cruz to get our attention? Cruz giving a speech in Senate chamber while licking a gavel à la Miley? Tweeting out a nude selfie? Or worse: twerking.

Some of Cruz’s fellow Republicans have been warning us for weeks about his erratic behavior, but we have ignored them. Sen. Bob Corker called him “confused.” Karl Rove noted that, “His fellow senators don’t know where he is coming from.” And Republican congressman Peter King—a man known for his warmth and compassion—made it clear that what Cruz is doing is “a form of governmental terrorism.”