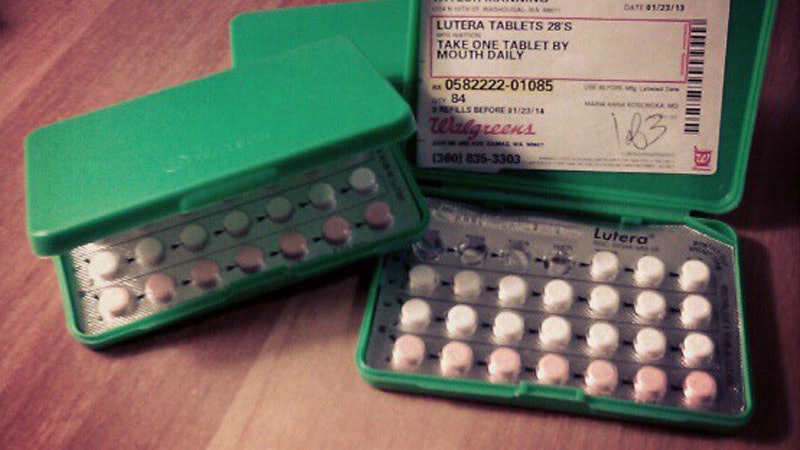 If someone offered me one million dollars to remember to take my birth control pill every day at the same time, I still wouldn't remember to do it. It feels like I've tried everything to remember to take it — alarms, alarms on friends' phones, putting it next to my toothbrush, putting it in the fridge next to the ice cream I snack on every night (it's a valid lifestyle choice, leave me alone), taking it first thing in the morning — but something always gets in the way. The way my life and many other young woman's lives are structured, we're never in the same place at the same time; sometimes, I have a shift at work when I'm scheduled to take my pill and don't remember to do it, or sometimes I impromptu sleepover at a friends and don't even have my pills, or sometimes I don't have a valid excuse and still forget.

But when taking the pill, it's really important to do it every day and at the same time every day. In an article for Fusion, Taryn Hillin discusses that while it's not crucial, the timing does matter — and why. Here's the deal: If hormone administration isn't kept consistent within the body, all sorts of things can go out of whack. It is recommended that a new dose of the hormones be put in your body within evenly spaced intervals — hence the requirement to take the pill everyday.

Luckily for me and other women who live busy and hectic styles, or are just generally forgetful and bad at taking pills, we've got options. There are other no-fuss, low-hassle forms of contraception that are effective, but don't require the same constant, careful timing as the pill. Check out some of the different forms of birth control that might suit your lifestyle better than the pill:

IUDs are small T-shaped devices made of plastic and, at times, contain copper. Sometimes they affect the movement of sperm so it can't fuse with an egg and other times they prevent women from ovulating altogether. An IUD has to be put in by a healthcare professional and horomonal IUDs can be left in for up to five years, whereas IUDs that contain copper are effective for 12 years and can cost between zero and $1,000. IUDs are extremely effective — only one percent of women who use them get pregnant and they can reduce the risk of pregnancy by 99.9 percent if inserted within five days after unprotected sex.

Some disadvantages of IUDs include: mild to serious pain when the IUD is being put in, spotting betweem periods, and heavier periods with worse menstrual cramps. It's a bad idea to take IUDs if you have an STI, cervical cancer, or unexplained vaginal bleeding.

IUDs don't protect you from STIs.

NuvaRings require more attention than IUDs, but significantly less than the pill. The NuvaRing is basically a small ring you insert into the vagina yourself which contains estrogen and progestin; it should be worn for three weeks out of the month. The hormones in the NuvaRing prevent eggs from leaving the ovaries and make cervical mucous thicker so sperm have a hard time entering. Like an IUD, only one out of every 100 women who use NuvaRing correctly will get pregnant, but since it does require some care and changing, nine out of 100 who use it incorrectly will get pregnant.

NuvaRing functions almost exactly like the pill and while most women adjust to it without serious issues, it can cause bleeding between periods, vomiting and nausea, and unpredictable cycles. You shouldn't use a NuvaRing if you smoke and are over 35, have had complications after an organ transplant, or have serious heart problems.

NuvaRings won't protect you from STIs.

Birth control patches, commonly called Ortho Evra, are placed on the skin once a week for three weeks, followed by one week without the patch, exactly like NuvaRing or the pill. Even though you have to change them with more frequency, some women prefer the patches over NuvaRing because it can be sometimes felt or moved during sex. Like NuvaRing, only one out of every 100 women who use it correctly will get pregnant, and nine out of 100 who use it incorrectly will get pregnant. Like most other forms of birth control, the patch can provide protection against acne, bone thinning, bad menstrual cramps, and heavy or irregular periods in addition to acting as a contraceptive.

It's unsafe to use to patch during prolonged bed rest or if you have blood clotting disorders. It can have the same side effects as the NuvaRing.

Patches won't protect you from STIs.

Remember, every body is different and you should consult with a healthcare professional before making your own decision. Different types of birth control can effect everyone differently based on family history and genetics, personal history, and lifestyle. Check out more methods for contraception and STI prevention on the Planned Parenthood website which has excellent resources and tools to answer any questions you might have.

More like this
The 19 Best Tweets & Memes About Bisexual Awareness Week
By Lexi Inks
Why A Libra & Libra Couple Might Become Codependent
By Kristine Fellizar
These 4 Signs Are The Seductive Sirens Of The Zodiac
By Brittany Beringer
Are Quality Time & Gift-Receiving Love Languages Compatible?
By Lexi Inks
Get Even More From Bustle — Sign Up For The Newsletter