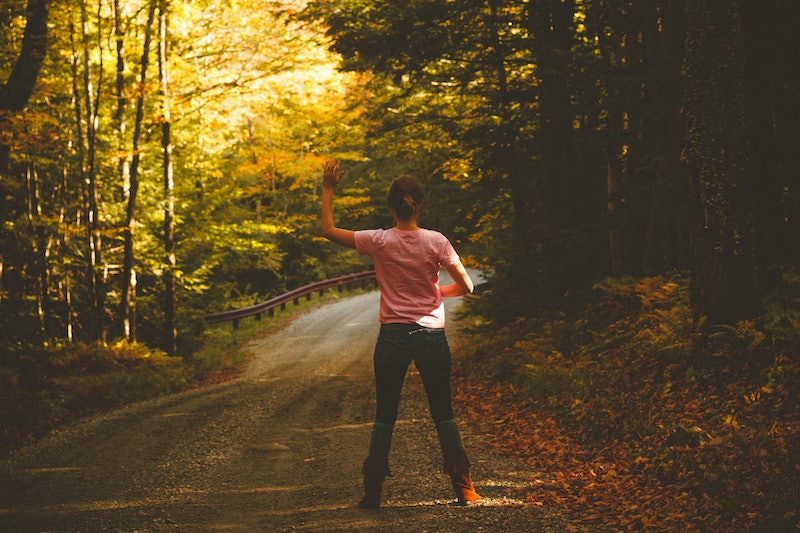 As I got on a plane from New York to San Francisco last summer, I felt like I was headed toward friendlier skies — not just in terms of the weather, but also in terms of the dating market. In addition to being known for its high male-to-female ratio, the Bay Area is also considered an exceptionally liberal region. Thinking I was in a playground for women seeking feminist men, I signed up for OKCupid, Tinder, and Coffee Meets Bagel — and openly revealed my identity as a feminist writer on my profile.

Everything was great — until the sexist parade started marching in.

Ben*, a software engineer at a large tech company, seemed like a sensitive, progressive guy — until he responded to my explanation of my college thesis problematizing the gender binary with, "But you know men do have better spatial reasoning, right?"

Michael*, a visual effects designer who openly identified as a feminist, spent our third date trying to convince me that men have equal disadvantages to women. When I brought up rape culture as a counterexample, he retorted, "Who is going around raping people?"

John*, an accountant who spoke vehemently against slut-shaming, shamed me for not wanting to hook up with him. And Andrew*, a startup founder who volunteered at a school teaching girls to code, said he was worried I would "put a hex on him or something" when he read "feminist" on my profile.

And these are the people who made it past the initial messages to a first date. And oh, the messages.

OKCupid users trolled me with rhetorical questions like “A feminist, eh? You don’t want a man with balls, do you?” and mansplanations like “Third-wave feminism is all about female chauvinism and ignoring the sexism that’s been imposed upon men for centuries.”

Tinder users swiped “yes” merely for the opportunity to tell me, "R u feminist? that's mean" and "What would you think if I said I was a masculinist blogger?"

I developed a general annoyance with the dating pool, but I also developed a fear that if I met someone I really liked, he would reject me as he learned more about my affiliation with feminism. I’d spend otherwise good dates with a nagging sense that in a matter of minutes, I would reveal a deal-breaker: that I was a feminist in the Bay Area.

About six months into my dating adventures, a guy who had struck up a conversation with me in a bar observed that my body language looked defensive. I realized that though we were still on introductions, I was already fretting over the inevitable “What do you do?” question and formulating palatable answers to the follow-up “What do you write about?” question ("Gender equality"? "Social justice"?). I realized I'd already grown to dread the moment the f-word came up in conversation.

Shortly thereafter, I decided to make a change.

After eight long months of online dating, I’m no longer on any dating apps, and I don’t go to bars to meet guys. I don’t want to subject myself to more antagonism, sexism, or harassment. Maybe I’ll meet someone at a queer poetry slam or a social theory book club or another event I’d go to anyway for my own enjoyment. Instead of shaping my activities around the search for a significant other, I’ll select a significant other based on what I like to do and what causes I care about.

And if I don’t find anyone for a while? All the better for building a fulfilling enough life alone that I’m not tempted to settle. As bell hooks writes in Communion: The Female Search for Love, “When we are self-loving, our growing contentment and personal power sustains us when we are rejected or punished for refusing to follow conventional sexist rules."

Business experts advise you to go into negotiations with a Best Alternative to a Negotiated Agreement (BATNA) — what you'll settle for if you don't get what you want. I think it's also important to go into dates with a BATNA. When trying to negotiate for a feminist partner, my BATNA used to be a willingness to date someone who did not identify as a feminist. But now, my BATNA is to be single. And now that I've experienced both BATNAs, I far prefer singlehood to evenings spent trying to convince men sexism exists and defending myself against accusations of female supremacy.

Recently, both the oldest woman in Europe and the oldest woman in Scotland cited singlehood as part of the secret to their longevity. “I didn’t want to be dominated by anyone,” 115-year-old Emma Morano said. I hear you, Emma. In a culture where dating, relationships, and sex are depicted as arenas for men to assert their dominance over women, my singlehood is a form of protest and self-respect.

The personal is political, and my unwillingness to sit through yet another explanation of how feminists are dramatic or to date another guy who thinks I have an obligation to shave my legs makes the statement that these attitudes are not okay.

Not all men adhere to gender roles in relationships or resist feminism, but by refusing to reward those who do, I am announcing my disapproval of men who disrespect the women they date — and limiting my own potential suitors for the better.

Sure, given the choice between being single for five more years or finding a feminist counterpart, I'd pick the relationship. But I'd choose singlehood over dating another anti-feminist, quasi-feminist, or pseudo-feminist any day. And I'm done apologizing for it.

*Names have been changed.