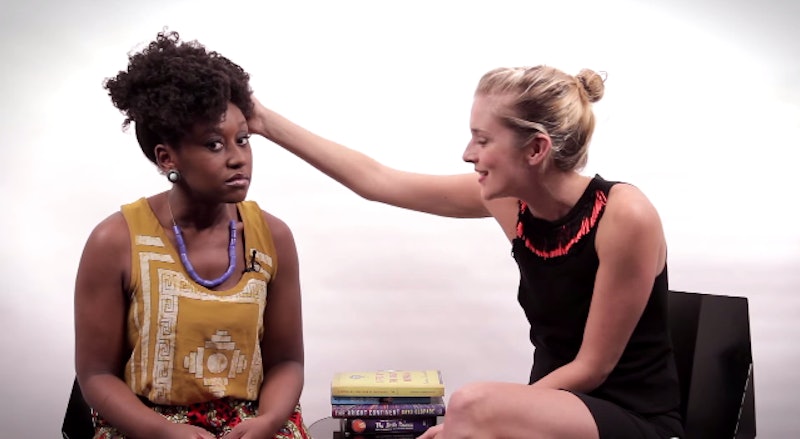 Satire can be a great way to address some of society's failings, if it's done well. Thankfully, actress Nana Mensah’s video is a hilarious and informative satire on what interviews and conversations can be like for black women. I first encountered Mensah in An African City , a web series that’s a bit like Sex and the City if it was set in Ghana. Her character, Sade, was one of my favorites, so I’m excited to see that Mensah’s working on other projects — particularly Queen of Glory , the very real independent film that she’s discussing in this fake interview with Caitlin Fitzgerald from Masters of Sex.

I’ve never been interviewed about a personal project (yet), but I can absolutely relate to some of the outrageous moments in this interview. It recalls a lot of moments when I’m first meeting someone who, for some reason, doesn’t know how to talk to me without referring to stereotypes. Right off the bat, the video starts with the jokes, with the interview taking place on “Supremacy Tonight!” When “Sally Blanco” greeted Mensah with an overeager “giiiiiirl” I had a flashback to all the times a white person has suddenly switched to addressing me as “girl” or “sistah” out of nowhere. Usually with a wink, as if winks on their own aren't bad enough.

There’s also the moment when the host, in a shocked voice, tells Mensah she’s beautiful. And Mensah is a beautiful woman who I’m sure appreciates compliments, but not when they come with a tone of disbelief. I’ve heard a bit of the same tone of surprise, usually followed by a comment on my skin color. Yes, it’s possible to be dark skinned and pretty, so being surprised by that can really undermine a compliment. Then, of course, there’s the hair grab. Even well-meaning friends of mine have stopped mid-conversation to reach up toward my hair because they just “have to touch it.” I try to make sure it only happens once, and luckily, it’s happened less since I cut my hair short, but still, please keep your hands out of my hair, no matter how interesting it looks that day.

This interview's fake, but it draws on very real microaggressions that Mensah and other black women and women of color face. Mensah actually manages to get across some information about her film, Queen of Glory , but most of her energy is spent on addressing and correcting the host's stereotyping. It’s a bit frustrating to have to spend more time explaining who and what you’re not, when you could be talking about who you are. Laughing at this video is a good way to vent some of that frustration.