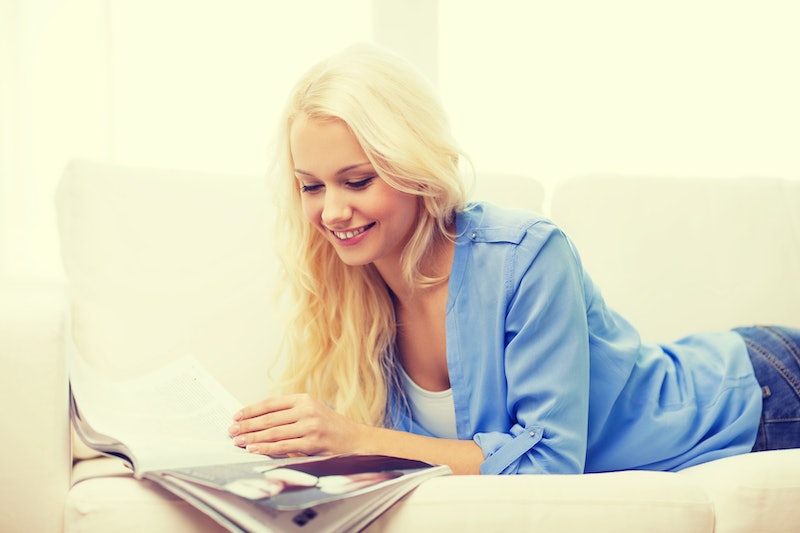 The irony that I am writing to you about fashion magazines using a web-based, online platform does not escape me — I promise. I wouldn't be here (and who knows if fashion sites in general would even be here) if it wasn't for good old glossy-covered magazines? Magazines raised me and — like the sentimentalist that I am — still play a pretty big role in my media consumption even though I am online most of my life. Magazines are still so important to me personally as a writer and I'm here to make the case that we should all be buying more of them.

As a kid growing up in a rural farming community in Canada without cable, my only glimpses into fashion were through the weekly episode of Jeanne Beker's Fashion TV (the once-weekly music video countdown on YTV) and through the newsstand at our local drugstore. I was a tomboy for most of my adolescence, favoring camo-print tearaway pants and oversized hoodies. While I'd always been vocal and opinionated about what I wanted to wear, something changed around the sixth grade and I became decidedly more feminine and trendy. My sixth grade pleather collection was off the charts, let me tell you that much — the early 2000s were, simply, a special time.

Fashion magazines were generally my outlet of choice: I knew the days that new shipments would come in, memorized the "sell by" dates and re-read each magazine about five times before clipping out the best bits to save. In a town as tiny as the one where I grew up, it was easy to feel isolated and the voices I read and faces I saw in these magazines were my reminder that I wasn't alone. They gave me a bigger picture of the world than I was able to see right then and there and showed me so many different ways a person could be. They were an escape of sorts, sure, but they also grounded me in that way. I had wanted to be a writer at a magazine since I was 12 years old — to tell stories and my own. To explore all of the different ways it was possible to exist.

Now, there are millions of voices that are invited into our homes, onto our phones, and through our computer screens on an hourly basis. Thanks, Internet. Anyone with access to cyberspace and an opinion can share their words, and for that I am so grateful. Whether we're talking about a fashion blog, social media account, or online publication, reading and interacting with people on the internet has wholly changed my life for the better. The internet is important and I'm big on a variety of voices.

So why do we still shell out double digits per issue for international fashion magazines? Are they even still relevant, never mind important? Uh, yes. Just like a diversity of voices is vital in this world, a diversity of delivery and mediums for those voices is just as important.

Of course, there's something inherently different about holding something in your hands (blah, blah, blah) — you've heard that whole argument before. And the fact that magazines tangibly exist is important, but partially because it makes them and the words and works inside of them really accessible. You can recommend a website to someone and share or post links, sure, but you can give an issue to someone or leave a magazine somewhere. There are computers in the libraries and a lot of us have computers in our pockets, thanks to smartphones. Still, magazines are a physical presence that only demands that you pick them up to read and tap into what they have to offer. In places where internet access is scarce or for people who don't have it at all, magazines still prevail and are available for consumption.

Despite being "the most guilty" of needing an endless stream of content and being an insatiable consumer of information, I find excitement and uniqueness in the form of something that was so put together that it needs to last a whole month. The idea of holding the work that a collective of people spent time intricately crafting, printing and shipping around the world is a deep thrill — don't you think? We flip out over the latest magazine covers, we demand diversity in their pages — and we wouldn't if we didn't think they made a difference. We can ignore visible diversity online or on TV if we really want to, but at some point in our day we're likely to come across magazine covers. They're pretty much inescapable in a way that most other content isn't. They have a one-of-a-kind presence and position of influence. They give us something universal to understand and use as a starting point for dialogue.

The news that Condé Nast might not be eligible to win magazine awards (because their writers are now also working on the advertorials that run in their magazines) made me a little sad. It's a sign that magazines are struggling to adapt and are not as financially stable as they once were. This means that we could potentially see the demise of mass market print, which now seems inevitable.

At the end of the day, though, there are still girls in rural towns who need to be able to see beyond that, even if they don't know what the coolest blogs and online publications are or have internet fast enough to regularly read them. There are plus-size girls and women who need to see and read Nicolette Mason's column in Marie Claire. Print media and online media are complimentary, not necessarily exclusive, so they need to exist together. If we stop buying and reading magazines, we're removing part of the equation — which is no good for anyone.

More like this
The Best Plus-Size Looks From New York Fashion Week
By Dominique Norman
Berriez Founder Emma Zack On Her Size Inclusive NYFW Show
By Dominique Norman
The 12 Best Strapless Bras That Won’t Slip & Fall Down
By Audrey Williams and BDG Commerce
Confused About Blush Placement? This TikTok Makeup Hack Will Help
By Olivia Rose Ferreiro
Get Even More From Bustle — Sign Up For The Newsletter