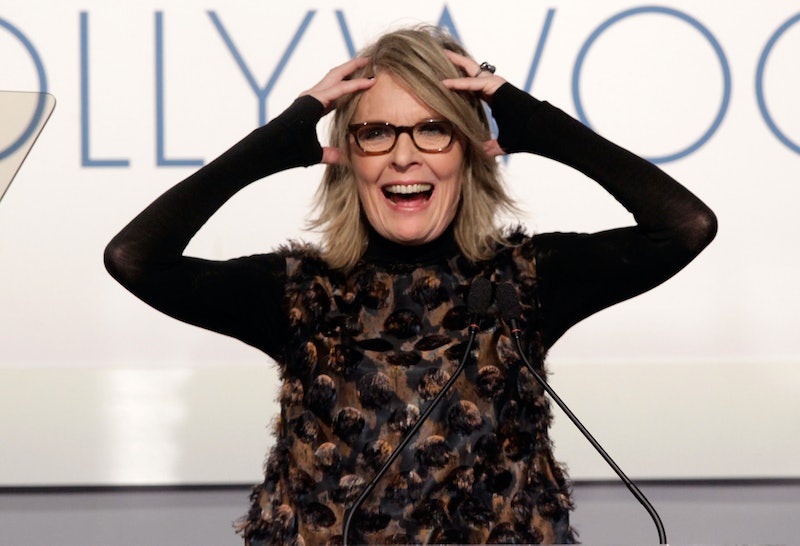 It's a known fact that Hollywood actors rely on a team of stylists and glam squads to help them perfect their public image. Diane Keaton is an exception to that rule. Along with her groundbreaking performances in films like Annie Hall, Keaton has carved out her own style that often bucks the trend but still manages to stay in the realm of fashion. If any designer can respect Keaton's unique aesthetic, it's a visionary like Thom Browne. So, it doesn't come as any surprise that two would collaborate on a short film called Six Sisters that Keaton narrates based on Browne's Spring 2015 collection.

"I'm going to tell you a short story... this story is about six sisters who are very close, very nice, very simple, very unique, and very fun," Keaton says at the beginning of the four-and-a-half minute film. The camera pans up to reveal a well-suited Browne typing the words to the script in a tiny office. "The sisters didn't agree on everything, but they did agree on what to wear from Monday to Friday," Keaton continues while models walk around in Browne's creations. The film explores the day-to-day decisions made by the designer's fictional muses. Each day begins with a particular outfit that one sister would come up with while "all the sisters followed." The film also cuts to shots of Browne sketching the collection as well as his "characters" coming to life backstage at his garden-themed fashion show.

Head over to Style.com to view the short film Six Sisters and then watch Browne's Spring 2015 runway show that inspired it below: