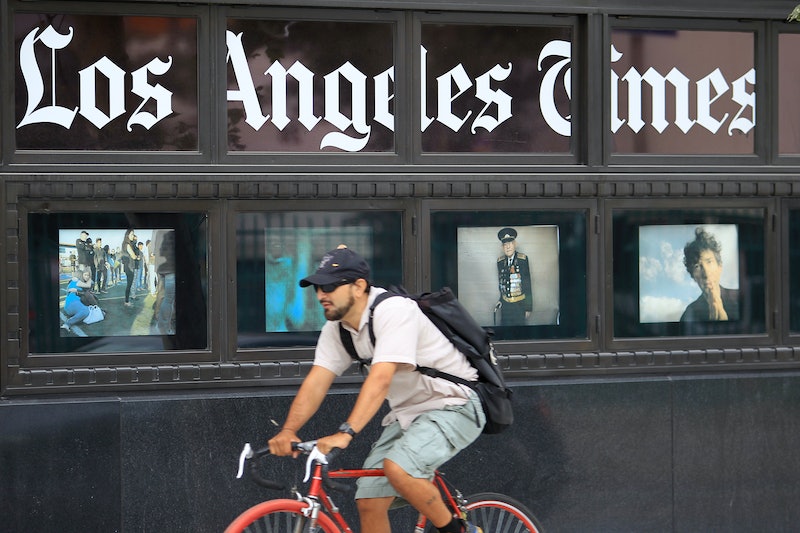 When is it acceptable to disregard someone’s opinion? Over the weekend, in a piece explaining why the LA Times did not run a letter that made false statements about Obamacare, the newspaper’s editor Paul Thornton mentioned as part of his explanation that the paper also does not run pieces that say climate change is not real. This garnered considerable outrage on the right, that a mainstream news source would refuse to publish a widely held opinion. But Thorntorn is standing by his decision.

Which brings us back to our original conundrum: When is acceptable to disregard someone’s opinion in a public forum?

Personally, I’m totally on board with the LA Times not publishing climate deniers. In this case, they have chosen not to allow debate on a subject which experts accept as settled. I wouldn’t want them running editorials calling gravity a hoax, either. And if a letter writer makes patently false statements about Obamacare, then he loses his right to be heard.

But still, it’s a scary slope once you start rejecting an opinion you decide is without merit. How many ideas which seemed radical and ridiculous at the time are now things we take for granted? What would have happened if no one had ever given Darwin’s theories a voice? Or Newton’s? Or Galileo’s? Certainly all of those thinkers had detractors in their time, but they were still allowed to speak. And we are all better off for it.

Obviously as people we have to sort through opinions on a personal level and decide which we think have merit and which we reject. But on an institutional level? When can a newspaper decide not to give voice to an opinion?

If this were just about anything other than climate change, I would be up in arms about the decision to exclude one point of view on a controversial topic. Climate change, after all, is potentially apocalyptic. Literally apocalyptic, as in the end of all life. So I’m okay with maybe squashing a little dissent now that 95 percent of the experts are in fact convinced the planet will die if we don’t do something.

We live in the age of the Internet where theoretically everyone has the ability to express their opinion in a public forum. But this does not end the responsibility mainstream news and media sources have to treat opinions fairly. Discretion is always necessary, of course, but as our society grows increasingly polarized, the established, politically and socially neutral media outlets like the LA Times are increasingly important as a place where all places on the political spectrum can come together in one forum. Otherwise we go off into our separate corners of Fox News and MSNBC and it's like that couple that can't get a divorce because neither one can move away, but they have nothing else in common anymore.

Now for those of us not in charge of major newspapers, this also means we should continue to engage with those mainstream sources as well as our favorite left-leaning websites. Because there is a difference between disagreeing with someone else’s opinion and rejecting it’s right to exist altogether. Here’s hoping that papers like the LA Times never lose the right balance.