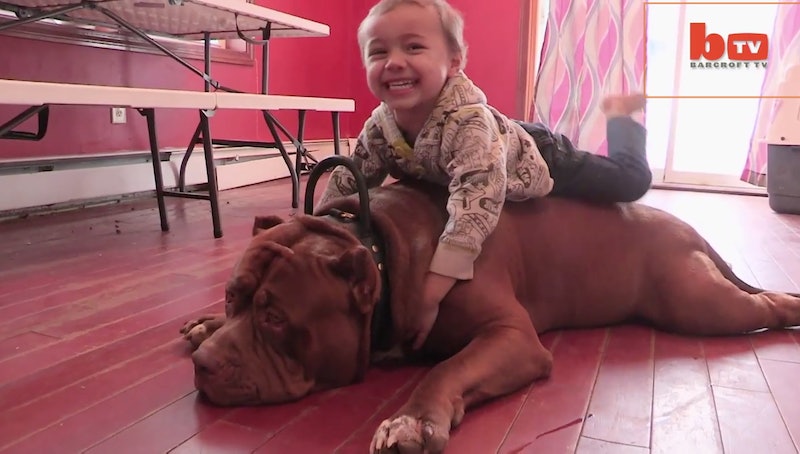 It is well-known that pit bulls, as a breed, have a generalized bad reputation for violence after their years of being bred primarily for biting and holding large animals like bulls and bears manifested into a few highly-publicized attacks against humans. The ASPCA emphasizes that, above all, it is important for pit owners to understand the highly specific needs and patience it takes to raise a pit bull, and no family exemplifies that enduring kind of love than the family of Hulk, the friendly 175-pound pit bull who basically knocks all stereotypes about pit bulls out of the water. (No, literally, he could knock them out of the water.)

Marlon and Lisa Grannan were especially equipped to handle Hulk, as they devote their time to running Dark Dynasty K9s, a center that offers clients training for dogs as security guards, personal protectors, and general obedience training. Hulk was a little puppy when they first got him, which is a little hard to wrap your head around when you see him now at a mere eighteen months old. Once you name a dog "Hulk," I guess there must be a lot of pressure to live up to the name. And truly, he did. Even though he is capable of all the insane physical feats that pit bulls manage, when he is in the house, he is every bit the Hulk's alter ego Bruce Banner to his tiny friend, the Grannans' 3-year-old son, Jordan.

The two of them are so inseparable they even have their napping schedules synced up:

Side note: Can somebody please make sure Jordan meets the adorable little girl who bossed around six pit bulls? Because I think they'd be great friends, too.

In an effort to end the widespread prejudices against pit bulls, the Grannons frequently uploads videos of their four-legged pal Hulk to show them just how good-hearted and friendly he is with their family.

"Because pit bulls are only in the media when bad things happen, this myth of them as monsters gets perpetuated, but it's not true," said Marlon in a statement to ABC News. "They might not be for everyone, but under a good leader and with proper training, they make amazing family and work or protection dogs."

Here is Hulk as a baby:

And here is again in a weigh-in a month ago that quickly went viral:

Sign me up for whatever milk bones he's getting so I can ALSO have super powers, please and thank you? And because obviously you need some cuteness for the road, here's a video of Jordan and Hulk singing together: