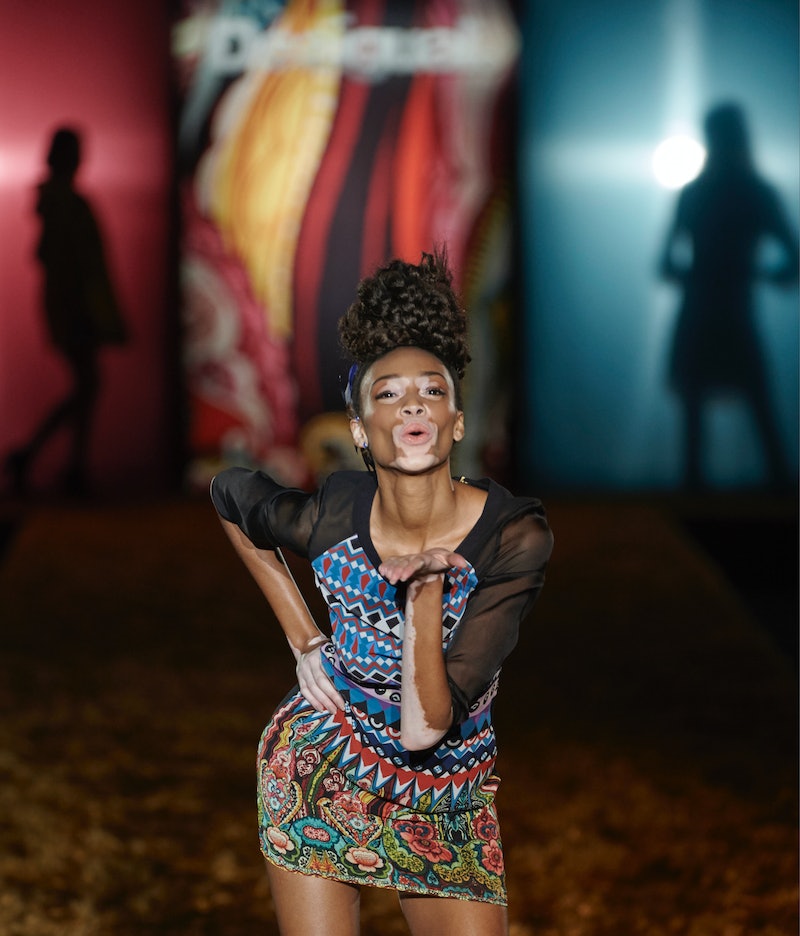 As a society, we don’t like differences. We don’t like quirks and kinks that break the fluid symmetry that we try to build our lives around. Images of a suburb from a Coen brothers’ movie always come to mind: Perfectly manicured lawns, same hedge heights all down the street, same garage doors, same brown roof shingles. Same, same, same. To an extent, that kind of regularity is beautiful. But is the opposite of that not beautiful?

We’re all trying to find our peace. We’re all trying to wake up in the morning and, with an incoherent grunt for coffee, try to give a sleepy smile back to the person looking at us in the mirror. And I say “try” because we’ve been made to think that something is wrong with us, and it hurts.

10,000 people Google “Am I ugly?” every month. According to The Real Truth About Beauty: A Global Report , only two percent of women around the world would describe themselves as beautiful. What. How? Why? We’re all gorgeous to begin with, but it gets taken away from us bit by bit by the knit-picking hands of others. We critique ourselves with the measure of someone else’s idea of beauty, not our own. Would I really have an issue with the lines around my mouth if I didn’t know they were supposed to be bad? Most likely not. Would my round hips bother me if I didn’t know other women disliked them so much? Definitely not.

For something as personal as the idea of beauty, it’s interesting that we let someone else take the weighty responsibility of defining it for us.

Idea-driven product designer Richard Seymour argues that beauty isn’t a thought — it isn’t something you can think about and capture with words and rules. But, rather, it’s a feeling. You form an emotional bond with the subject. You feel a zing, feel something catch you by the throat, and boom — beauty. Something about it reached out a hand and spoke to you; touched you. When described in that way, that’s some intimate stuff. Some intimate, deeply personal stuff. So why would we let a glossy ad trump a reaction like that?

While a reality like this is upsetting, we’re starting to see a shift away from those Coen brothers’ suburban neighborhoods. We’re starting to see hints and sparks that it’s okay for you to have curly hair and for me to have a gap in my front teeth and for both of us to be beautiful. Different, but still beautiful.

An encouraging sign was the level to which model Winnie Harlow killed it during Fashion Week. Born with a skin condition called vitiligo which makes her lose pigmentation around her mouth and eyes, she made absolute waves in New York. People were electrified by her — her stark contrast made her more beautiful, rather than less.

Rick Guidotti, renowned fashion photographer, made similar remarks recently. In a TED talk that centered around what it means to be beautiful, he pushed us to expand what our limited definitions of the word are. While his job led him to amazing opportunities like photographing Cindy Crawford, he wasn’t reluctant to admit that he would come home feeling burnt out from being dictated who exactly counted as beautiful and who didn't. He was an artist — he saw beauty in everything. He didn’t want to see it limited to high cheekbones and heavy gowns; he wanted to capture it in places that spoke to him personally.

And as luck would have it, inspiration struck that afternoon as he was waiting on a street corner by a bus stop. As he waited to cross the street, a beautiful albino girl with long white hair and pale, milky skin walked passed him and headed towards the waiting bus doors. He was stunned. And electrified. The artist in him woke up and he saw something in the subject that the girl herself probably didn’t see.

He saw beauty and wanted — needed — to capture it, so he started a project where he would photograph those with albinism that were willing to sit for him. And one story in particular sticks out that really drives the point home on how people are able to take our sense of self away from us.

The first person to be photographed for the series — Christine — is an absolute knockout (as described by Guidotti, though most of us could probably agree). Right away — from her opening the door and entering his studio — he was stunned by her beauty. But instead of breezing in in a way that reflected that she knew exactly what she had, she walked in with shoulders slumped, head down; her words limited to shy and quick answers. After years of being teased because of her difference, she was conditioned to fade into the background; to feel like her difference made her ugly rather than incredible. She was left fragile and more than a little bit broken. Overwhelmed by the two different responses, Guidotti grabbed a mirror from the set, held it up to her, and yelled out that she was magnificent. And she got it. She burst out laughing and it was like she exploded. She was transformed — became vibrant — and all because she heard words that were different from what she was used to. Words that she already knew on the inside, but couldn't believe.

My message to you is this: As a society, we don't like differences. But as individuals, we have the power to change that. And you can change that by beginning to accept as much — yeah girl, you're gorgeous.